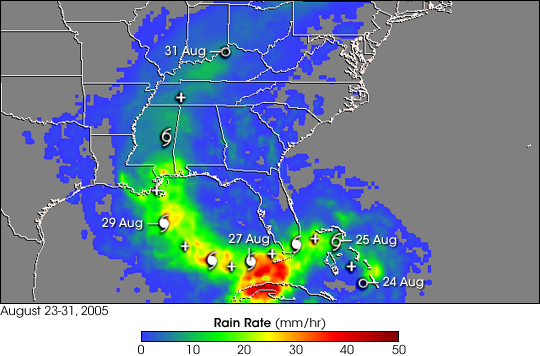 After forming in the central Bahamas, Katrina came ashore in south Florida as a Category 1 hurricane where it was responsible for 11 fatalities. The storm cut diagonally across the southern part of the state from just north of Miami on the east coast, through the Everglades, to Cape Sabel on the west coast. In the process, Katrina brought heavy amounts of rain to parts of south Florida and Cuba.

This image shows the Multi-satellite Precipitation Analysis (MPA) rainfall totals due to the passage of Katrina for the period August 23 to 31, 2005. Storm symbols mark the track of Katrina at 0:00 UTC (8 p.m. Eastern Daylight Savings Time (EDT) on the previous day), plus symbols are the location of Katrina at 12:00 UTC (8 a.m. EDT). The solid hurricane symbol represents a hurricane, the hollow symbol is a tropical storm, while a circle marks a tropical depression. The highest rainfall totals exceeded 12 inches of rain (dark red areas) over northwestern Cuba and the lower Florida Keys. Amounts over the southern Florida peninsula were between 5 and 8 inches (green to yellow area). Local WSR-88D radar esimates were locally much higher just west of Miami, but the overall pattern and amounts over the lower keys were in good agreement with the MPA totals.

After entering the Gulf of Mexico, Katrina intensified into a large, powerful Category 5 storm as it turned north towards the north-central Gulf coast. Katrina came ashore as a powerful Category 4 storm over southeastern Louisiana and southern Mississippi, causing catastrophic damage and numerous fatalities. Rainfall totals immediately along the coast of Mississippi were between 6 and 9 inches (yellow to orange) in very good agreement with local radar estimates. After coming ashore, Katrina tracked quickly up through Mississippi, western Tennessee and Kentucky and into Ohio. Katrina’s rapid forward progress helped keep rainfall totals down across the central United States with amounts generally less than 5 inches (green to blue) across northern Mississippi and parts of the Ohio valley.

The Tropical Rainfall Measuring Mission (TRMM) satellite has been measuring rainfall over the tropics since its launch in 1997. The MPA measures such as those show here are based on measurements by TRMM and other satellites. The MPA measurements are created at the NASA Goddard Space Flight Center to provide estimates of rainfall over the global tropics. TRMM is a joint mission between NASA and the Japanese space agency JAXA.