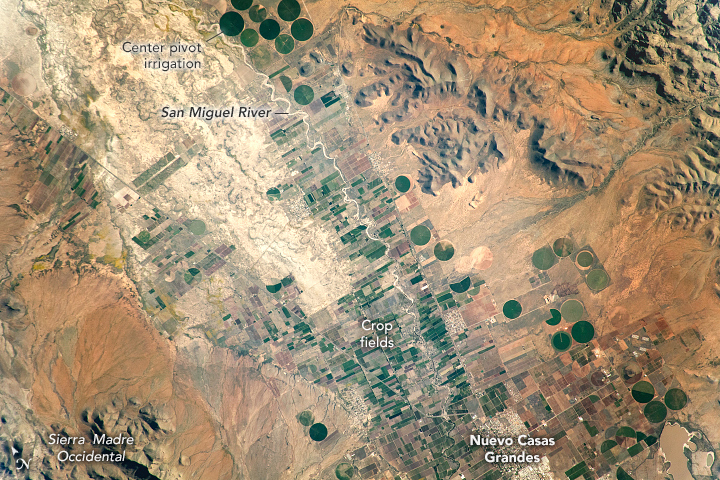 This photograph was captured by an astronaut onboard the International Space Station (ISS) as the spacecraft orbited over the city of Nuevo Casas Grandes and the surrounding Chihuahuan Desert. Located in north-central Mexico, this area has a rich history of agriculture and possesses several ancient settlements, including Casas Grandes located just outside the extent of this photo.

Meandering rivers carve into the valley floor and distribute water to the otherwise arid and mountainous region. The San Miguel River flows just west of Nuevo Casas Grandes (bottom right). The city is located on the broader Mexican Plateau (also known as the Mexican Altiplano) that is bounded by the Sierra Madre Oriental and Sierra Madre Occidental mountain ranges.

Agriculture is one of the primary land-use practices within this region. Maize has been grown in north-central Mexico for over 3,000 years and its production was critical in the spread of agricultural settlements north to what is now the American Southwest. Although an arid environment, the fertile flood plains around the San Miguel River are conducive to maize and other agricultural production. Major crop cultivars that have historically rooted settlements like Casas Grandes include maize, beans, and squash.

In more recent years, expansion of intensive agriculture beyond the river floodplains has been aided by irrigation systems. Several circular fields are visible (top and right in this image). These are center pivot irrigation fields that pump water from either the river or the underlying aquifer. Crops that are grown today in the state of Chihuahua, using primarily irrigated agriculture, include fruits, nuts, cotton, small grains, maize, and vegetables.

Astronaut photograph ISS062-E-151785 was acquired on April 16, 2020, with a Nikon D5 digital camera using a focal length of 500 millimeters. It is provided by the ISS Crew Earth Observations Facility and the Earth Science and Remote Sensing Unit, Johnson Space Center. The image was taken by a member of the Expedition 62 crew. The image has been cropped and enhanced to improve contrast, and lens artifacts have been removed. The International Space Station Program supports the laboratory as part of the ISS National Lab to help astronauts take pictures of Earth that will be of the greatest value to scientists and the public, and to make those images freely available on the Internet. Additional images taken by astronauts and cosmonauts can be viewed at the NASA/JSC Gateway to Astronaut Photography of Earth. Caption by Cadan Cummings, Jacobs, JETS Contract at NASA-JSC.

The fertile flood plains around the San Miguel River are conducive to maize and other agricultural production. 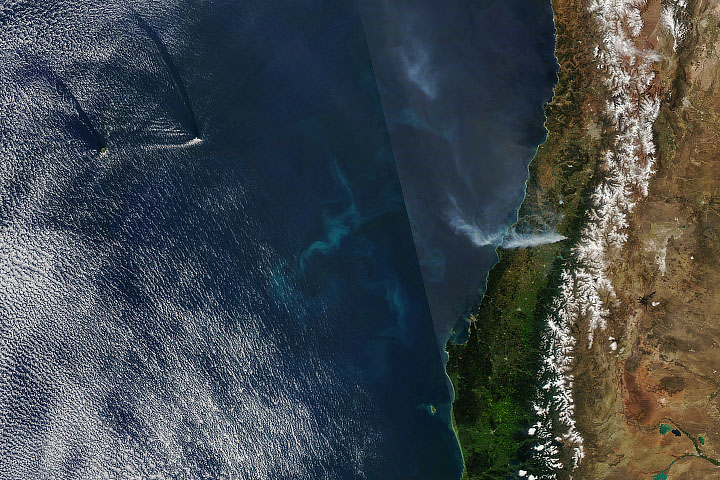 Drought on the Canadian Prairie

All vegetation—crops and natural vegetation—on Canada’s central prairie was growing less than average, as indicated by the predominant shade of brown in these vegetation index images from July 2009.