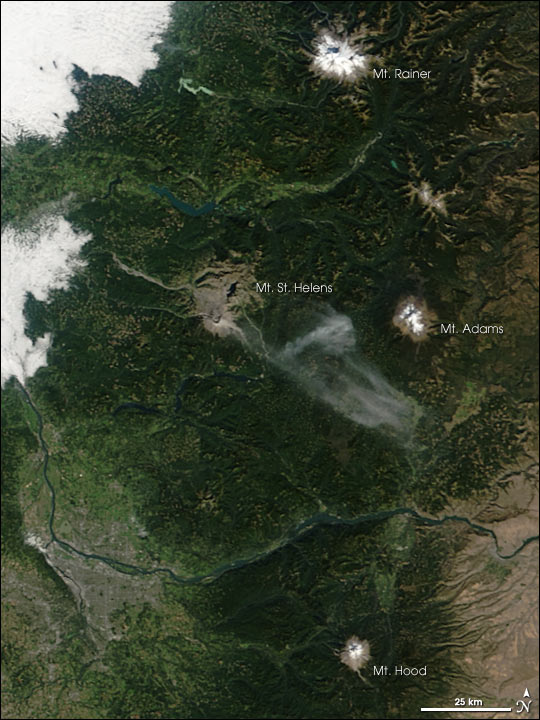 After more than a decade of inactivity, Mt. St. Helens in Washington began rumbling in late September with a series of small earthquakes, some of which were of the long-period type that geologists have come to recognize as the telltale sign that magma from the Earth’s interior is rising up to the surface. On October 1, 2004, the volcano released a small explosion of steam and ash and briefly quieted down, but in the days since, the earthquake activity resumed. Scientists raised the volcano’s alert level to three, the final step below active eruption.

On October 4, the day this image was captured by the Moderate Resolution Imaging Spectroradiometer (MODIS) on NASA’s Terra satellite, Mt. St. Helens again emitted steam and ash: during a 30-minute episode in the morning and for a 10-minute episode in the early afternoon. According to reports form the U.S. Geological Survey, the steam was likely produced by hot rock pushed up onto the mountain’s glacier that melted the ice and generated steam.

Mt. St. Helens is located to the left of the center of this image, and the ash and steam plume are visible drifting away from the volcano to the southeast, toward the glacier-covered peak of Mt. Adams. Other large mountains in the scene are Mt. Rainer (top) and Mt. Hood (bottom). The Columbia River cuts east-west through the lower part of the image, and the city of Portland appears as a gray patch along its banks at lower left.

Other signs that an eruption is likely in the near future are a bubbling (boiling) lake that has formed in the vent where the ash and steam were released on October 4, a quick return to earthquake activity following the emission episodes, the continued rising of part of the glacier and the south flank of the lava dome, opening cracks in the lava dome, and the detection of carbon dioxide and hydrogen sulfide gases at numerous sites. For more information on the current status of the volcano, please visit the U.S.G.S. Cascades Volcano ObservatoryWebsite.

Early in October 2004 Mt. St. Helens rumbled back to life with earthquakes, minor eruptions of steam and ash, and renewed growth of the summit lava dome. Fortuitous trajectories of the International Space Station provided the ISS crew excellent views of the area.

Early in October 2004 Mt. St. Helens rumbled back to life with earthquakes, minor eruptions of steam and ash, and renewed growth of the summit lava dome. Fortuitous trajectories of the International Space Station provided the ISS crew excellent views of the area.