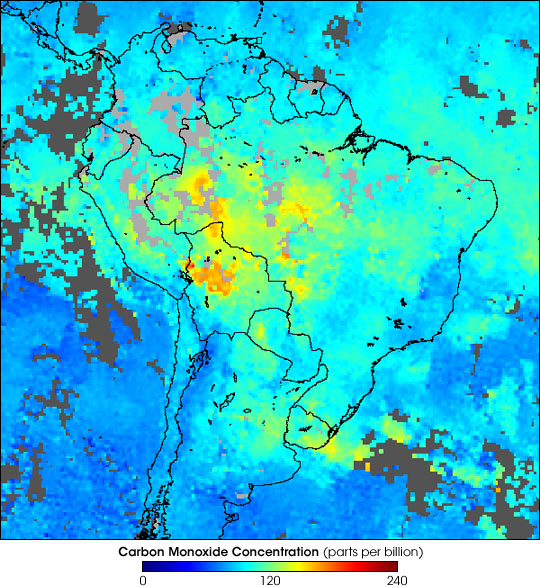 Slash-and-burn agriculture converting forest to farm land may pose the biggest threat to the Amazon ecosystem. Fires are numerous and widespread along the margin of the Amazon Rainforest during the height of the dry season, which occurs around the months June to August. The intense burning produces a large amount of carbon monoxide (CO) that is detected by the Measurements of Pollution in the Troposphere (MOPITT) instrument onboard NASA’s Terra.

The above image shows the CO mixing ratio over South America in the middle of Earth’s lower level of atmosphere (or “troposphere” at about 500 millibars), measured by MOPITT during the period from September 1-10, 2004. Red and yellow colors indicate the high levels of CO originating from the fires in the region and low CO concentrations are denoted in blue shades. Gray areas indicate missing data due to prevailing cloudy conditions.

The image above correlates very well with Terra and Aqua MODIS images showing fires and smoke in South America during this same time period. Please see Fires Near Bolivia-Brazil Border.