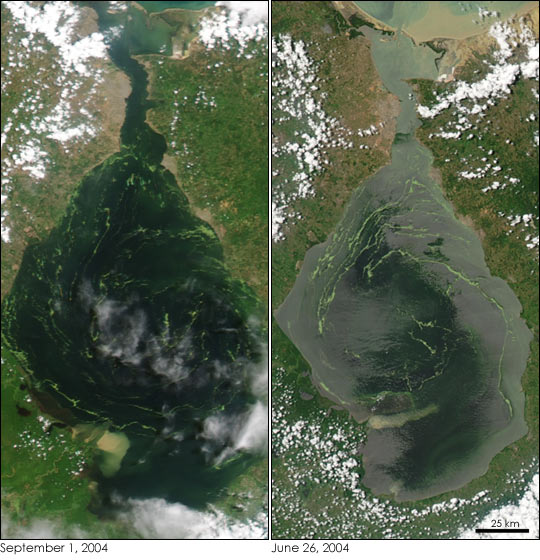 Traces of duckweed still form green swirls atop Lake Maracaibo in northern Venezuela. The weed, more formally called Lemna obscura, began to grow on the lake sometime between January and March 2004. With an outlet to the Caribbean Sea, Lake Maracaibo is usually too salty to support duckweed and other similar aquatic plants. The lake’s fresh water sits on top of a dense layer of salty water. The lower, salty layer traps nutrients at the bottom of the lake, depriving any potential surface plants of the nutrients they need to survive. This year, however, unusually heavy rain brought additional fresh water to the lake, which stirred the layers and allowed nutrients to float to the surface.

For a brief time, while nutrients were plentiful, the plants doubled in area every day. Then, as the lake began to settle back into its normal layers with nutrient-rich waters on the bottom instead of the top, the duckweed’s growth slowed and eventually stopped. The trend is clear in the image pair shown above. In the right image, taken on June 26 by the Moderate Resolution Imaging Spectroradiometer (MODIS) on NASA’s Aqua satellite, the swirls of duckweed appear more solid and cover a broader area. In the more recent image, acquired by MODIS on NASA’s Aqua satellite on September 1, the swirls are thinner. By the end of June, when the first image was taken, the duckweed already covered less of the lake than it did at its height. In mid-May, the plant covered 14.5 percent of Lake Maracaibo, according to Eduardo Klein, the Director of the Institute of Marine Sciences and Technologies at Simon Bolivar University in Caracas, Venezuela. He and colleague Carlos Castillo based their analysis in part on MODIS images, such as the above, provided through collaboration with University of South Florida. By the end of August, the weed only covered 5.36 percent of the lake.

While the duckweed appears to be dying down, scientists at ICLAM fear that heavy rains during the next few weeks could recreate the conditions that allowed the duckweed to grow in the first place. If that happens, the duckweed could begin to grow again. For more information, see Duckweed Invasion in Lake Maracaibo.

Green swirls of duckweed dominate the center of Venezuela’s Lake Maracaibo in this Moderate Resolution Imaging Spectroradiometer (MODIS) image acquired by NASA’s Aqua satellite on June 26, 2004. The Venezuelan government declared a state of emergency in mid-June to remove the fast-growing weed, spending about $2 million per month on clean-up efforts. Duckweed, more formally known as Lemna obscura, has never dominated Maracaibo so completely, so this is the first time that officials have had to deal with the plant.