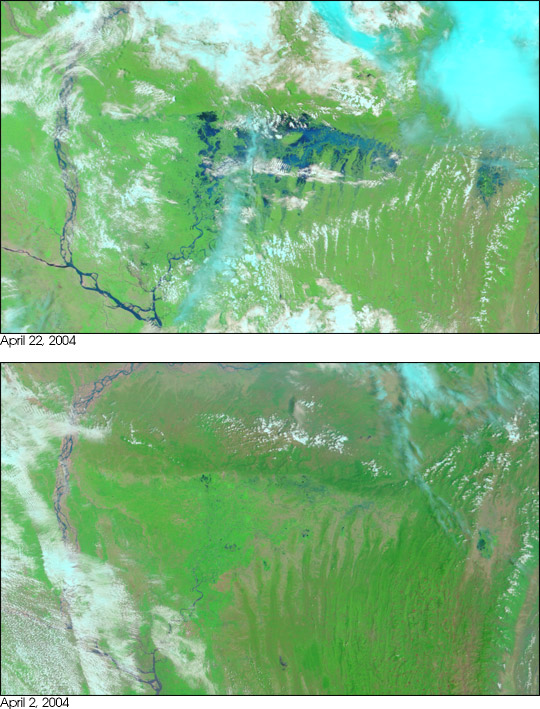 A series of intense storms have given rise to severe floods in northeastern Bangladesh. By April 20, more than half a million people had been evacuated, and 12 had died in the floods. Bangladesh frequently experiences severe storms during the hot season, and April 2004 has delivered a series of disasters. On April 9 and 10, a strong wind storm took 14 lives and injured nearly 200 when it swept across the country. A few days later, on April 14, two powerful tornadoes flattened over 20 villages in northern Bangladesh, killing at least 76 and injuring over 3,000. Then, on April 19, a severe storm boasting winds of 150 kilometers per hour (93 mph) moved across northeastern Bangladesh, triggering the floods shown in this false-color Moderate Resolution Imaging Spectroradiometer (MODIS) image taken on April 22, by the Terra satellite. Several rivers across the region had swollen past flood stage. Shown here are the Meghna, right, and its flooded tributaries, and the Jamuna, left. Water also flowed down from the Khasi Hills along the border with India. The hills line the top of the flood region in this image.

In these images, vegetation is bright green, water is dark blue, and clouds are light blue. The high resolution images provided above are at MODIS’ maximum resolution of 250 meters per pixel.

Part of the reason the storms caused so much destruction is the sheer number of people in the country. With well over 900 people per square kilometer, Bangladesh is one of the most densely populated countries in the world.

Over half a million people have been evacuated from northern Bangladesh after a series of destructive hot-season storms triggered wide-spread flooding.