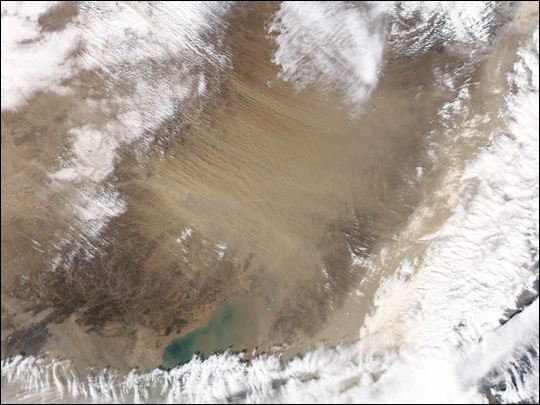 Visibility across much of northeastern China, including downtown Beijing, was reduced to 500 meters (1,600 feet) as a severe sandstorm swept southeastward out of the Gobi Desert on Wednesday. Residents who had to go outdoors were encouraged to wear masks to protect themselves from the choking effects of the dust and grit.

The true-color image above was acquired on March 10, 2004, by the Moderate Resolution Imaging Spectroradiometer (MODIS) aboard NASA’s Terra satellite. The sandstorm, in the center of this scene, is the wall of tan to light brown streamers completely obscuring the surface and blowing toward the southeast.

Scientists suspect that such sandstorm originate in areas that have been deforested and over-grazed for decades, causing the region to become more arid and exposing the dry, loose soil to the elements.

Acquired May 12, 2011, this natural-color image shows a dust storm blowing over northeastern China.

Dust and Pollution over China

Acquired at 12:10 p.m. Beijing time, this natural-color image shows a dust storm blowing through the Gobi.