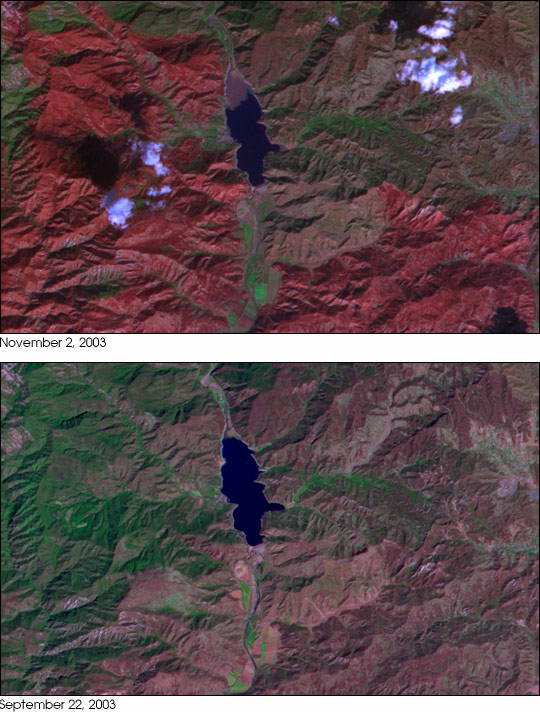 The image above (top) shows burn scars around Lake Piru in the Santa Susana Mountains near Santa Clara, California, northwest of Los Angeles. The earlier image shows the same area on September 22, 2003, prior to when the fires swept through. In the earlier image, healthy vegetation appears green, and naturally bare ground (or ground with sparse vegetation) appears pink. A few weeks later, fire has transformed the scene.

The areas to the east and northeast of the lake appear unchanged, while the entire left and lower right portions of the scene exhibit the deep red color that burned areas take on in false-color images made from satellite observations of the near and shortwave infrared part of the electromagentic spectrum. In the November 2, 2003, image, the nothern end of the lake is quite turbid, which could have been caused by ash and fire debris.

This pair of false-color ASTER image composites was created using shortwave infrared, near infrared, and green wavelengths (ASTER bands 5, 3, and 1).

Please also see a high-resolution view of the Santa Monica hills using a different set of ASTER bands to emphasis different details, as well as a MODIS false-color image showing a wider area.

Image by NASA’s Earth Observatory, based on data from the U.S./Japan Aster Science Team.