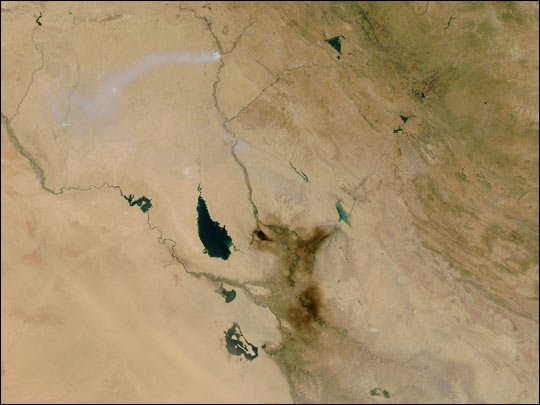 The Moderate Resolution Imaging Spectroradiometer (MODIS) on the Aqua satellite captured this image of oil smoke over central Iraq on June 25, 2003. The smoke appears as dark brown or black smudges in the center of the image, near Baghdad. A smaller, fading plume is visible to the west, along the Euphrates River.

A plume of white smoke originating at the top of the image drifts west and then southeast. This is smoke from a sulfur fire at an industrial sulfur facility in northern Iraq. According to local news reports, the burning sulfur is creating a health and environmental hazard, killing summer crops, and filling the air with poisonous gases. Imagery captured as recently as July 7, 2003, shows the fire is still burning.

The high-resolution image provided above is 500 meters per pixel. The MODIS Rapid Response System provides this image at MODIS? maximum spatial resolution of 250 meters.

The ASTER sensor on the Terra satellite captured this image of a sulfur fire at an industrial facility in northern Iraq on July 14, 2003.