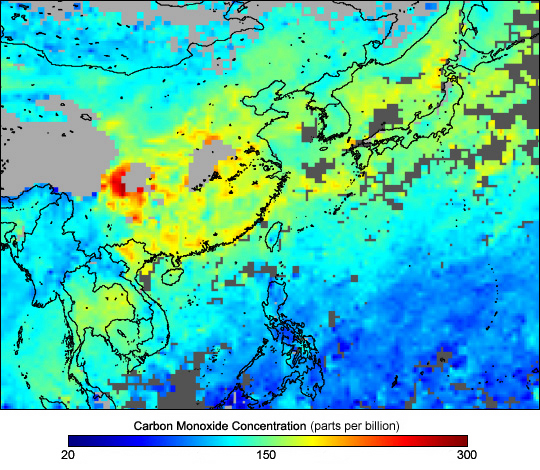 This false-color image shows concentrations of carbon monoxide at an altitude of roughly 18,000 feet (500 millibars) in the atmosphere off the coast of Asia and out over the Pacific Ocean. This image represents a composite of data collected over a 20-day period, from January 1-20, 2003, by the Measurements Of Pollution In The Troposphere (MOPITT) instrument aboard NASA’s Terra satellite. The colors represent the mixing ratios of carbon monoxide in the air, given in parts per billion by volume. In this scene, values range from as high as 220 ppbv (purple pixels) to as low as 40 ppbv (blue pixels). The white areas show where no data were collected, either due to persistent cloud cover or gaps between viewing swaths.

During the early part of the year, there is considerable outflow of pollution from China and southeast Asia. Carbon monoxide is a good tracer of this pollution since it is produced by incomplete combustion processes such as the burning of fossil fuels in urban and industrial areas, the use of biofuels in developing countries, and by biomass burning in the tropics. The Asian plume can be followed as it propagates out over the Pacific Ocean, and in some instances this plume reaches the west coast of the United States. Over China, industrial emissions are mainly responsible for the high levels of carbon monoxide observed in the image. During the time these data were collected by MOPITT, other satellite sensors observed heavy, widespread particulate pollution over this region. Over southeast Asia, the high carbon monoxide levels coincide with satellite observations of fires in Thailand, Cambodia, and Vietnam.

The MODIS sensor aboard NASA's Aqua satellite observed a heavy, gray pall of haze over Eastern China on Feb. 19, 2003.