Ten years ago, NASA-funded ecologist Steve Running, of the University of Montana, wrote an essay for the Earth Observatory about why NASA’s Earth Observing System (EOS) mission was so important. In this opinion essay, he talks about how changes in the Earth system documented over the past decade make satellite-based Earth observation more important than ever. The views expressed here are Dr. Running’s and do not reflect any official opinion or policy of NASA or the U.S. Government.

“EOS was conceived in 1990. On Dec 16, 1999, maybe fittingly at the end of this millennium, we will launch the first satellite designed to fulfill this vision. The one line summary of the purpose of EOS is to find out “Is the current human occupancy and activity of planet Earth sustainable?” …The purpose of EOS is to provide this factual information on trends of change in our Earth System. How we interpret these data, and the course of action we embark on in the next millennium will be a critical political topic. If global change trends turn out to be relatively modest, then only small adjustments in social behavior may be necessary.” 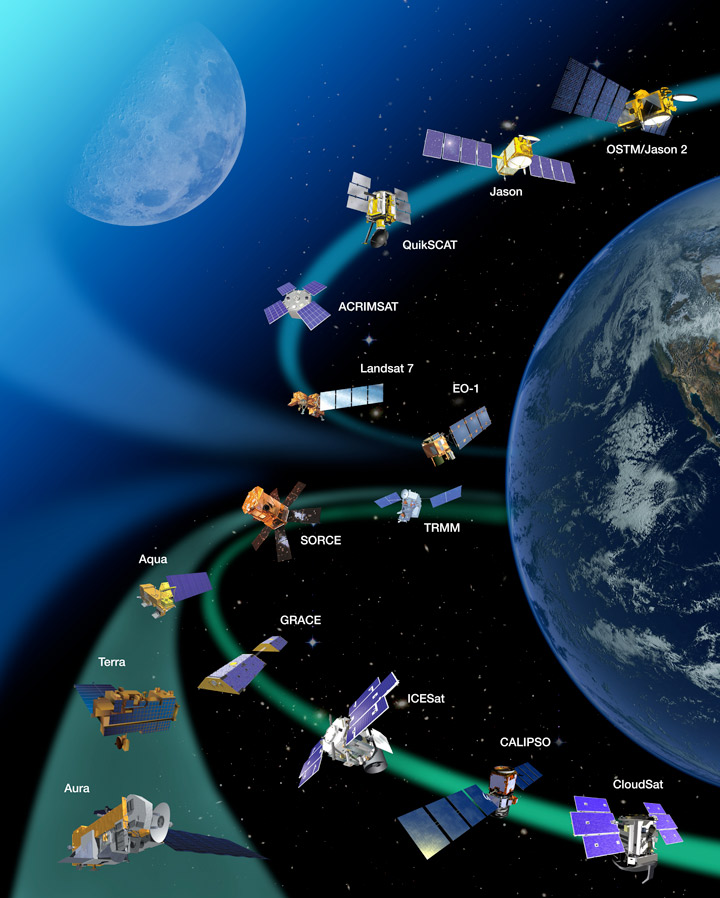 I am stunned by my own relatively optimistic naiveté a mere ten years ago about the variety and pace of changes we now know are happening around the planet. In those 10 years, the 3rd and 4th reports of the Intergovernmental Panel on Climate Change (IPCC) chronicled in progressive detail the accelerating changes in our Earth System. From surface observations of air temperatures, we learned that the hottest 12 years since 1850 have all occurred since 1990. We learned from EOS and other global observation satellites that the Arctic Ocean summer sea ice has retreated by 40 percent; sea levels are rising at 3.4 millimeters per year; 95 percent of the world’s glaciers are retreating; and plant growing seasons are 1-2 weeks longer in temperate latitudes, but these longer summers have caused wildfire activity to accelerate. Evidence of change is being observed from all corners of the Earth, from the poles to the equator, from the mountains to the coral reefs, in the atmosphere, cryosphere, oceans, and land.

Alpine glaciers all over the world are retreating. The terminus of Switzerland’s Steigletcher receded while the ice thinned dramatically from 1994 to 2006. (Photographs copyright Jürg Alean and Michael Hambrey Glaciers, Online.)

The global trends that Terra and later EOS satellites were launched to observe are becoming increasingly clear. In 1999, I outlined the potential policy relevance of those observed trends:

“However if impacts appear to be harmful and accelerating at an unpredictable pace, how can we ignore these early warnings in good conscience? It is essential the new political discussion be based on facts, not conjecture. These are lofty, long range, visionary objectives, similar intellectually to searching for other life in the universe. But global habitability has more immediate significance to us all. Let us hope that EOS allows us to start the new millennium with an enlightened understanding of the changing biosphere.”

It is now all too clear to me that many Earth System responses have been “harmful and accelerating,” and the necessity of global observation and regular monitoring, in support of very difficult policy choices in the near future, is even greater than 10 years ago. In the decade of EOS observations, fossil fuel emissions have risen from 6.7 to 8.7 Petagrams per year. Atmospheric carbon dioxide has gone from 363 to 386 parts per million, actually exceeding the”worst-case” (most fossil-fuel intensive) emission scenario used for climate simulations for the most recent IPCC report. As illogical as it sounds, humanity has actually accelerated its approach to the impending climate cliff in this last decade.

As policy makers respond to a changing climate, satellite observations of global trends will continue to be crucial. In my discipline of terrestrial ecology, I am now focusing on two over-arching global issues that have political relevance: understanding the limits of plant growth on Earth and monitoring global carbon sinks.

First, is it possible that humanity may now be reaching some very fundamental limits to biological productivity, the growth of ocean and land plants? There is still a lot of open space on Earth. I live in Montana, where the population density is low. But here, as elsewhere on Earth, remaining land is predominantly in regions of low biological productivity where crops are unlikely to grow well. There is accumulating evidence that limits are being reached in open ocean fish harvests, in agricultural productivity increases, in availability of both surface and groundwater irrigation sources. Peak oil may have now occurred, bringing the specter of permanently higher oil prices, which will increase fertilizer costs. Higher oil prices will place accelerating new pressures on terrestrial ecosystems for biofuel production.

The global population has doubled in my lifetime with resource consumption rates rising many-fold faster. Three billion additional people will be on Earth by 2050. In the past, biological productivity could be increased by just engaging more land and increasing use of fertilizer and irrigation. What if these options to increase productivity are tapped out, too? Can our expanding consumption go on forever? We all know the answer to that: it’s only a matter of when limits are reached in a closed Earth system. The popular author Professor Jared Diamond has written Collapse, an analysis of previous human civilizations that paid insufficient attention to resource depletion until they collapsed. The unexpected global financial meltdown of the past year should rightfully challenge our confidence that we truly understand and can manipulate complex global systems. The challenge of global problems is that almost no one can see the issue in its immensity, and here EOS has been essential. Global monitoring such as EOS can answer accurately key questions such as: Is tropical deforestation expanding? Are carbon emissions from fires increasing? Is desertification of arid land increasing? Is the area of irrigated agriculture declining? Are growing seasons getting drier?

The second global issue of political relevance that concerns me as a terrestrial ecologist is carbon monitoring. A new justification may be emerging for global terrestrial monitoring, carbon policy verification. As policy leaders develop plans for carbon trading, which allow offsetting fossil fuel carbon emissions based on the amount of carbon forests take up within the country, I wonder how pledges and sales of forest carbon sinks will be verified and who will verify them? We know that relying on national statistics is difficult, since methods of measuring carbon sinks are inconsistent between countries, and as a result, national statistics are of highly variable quality We need to be confident that terrestrial carbon sinks that are defined, invested in, and expected by future policy plans actually occur and are maintained. 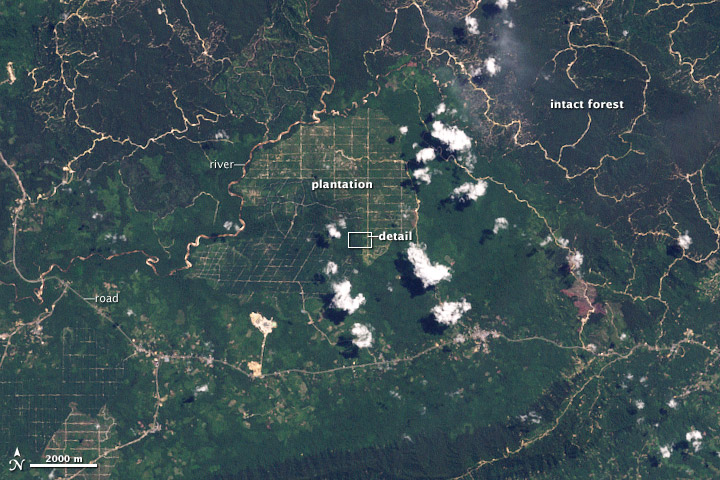 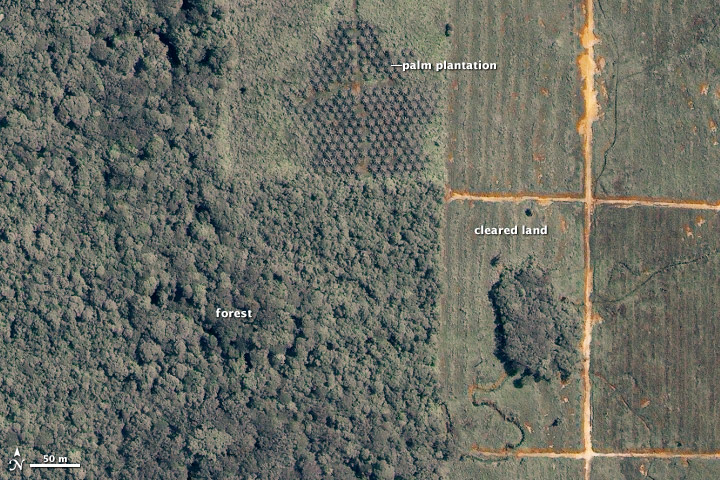 To monitor landowner compliance with carbon policy agreements, future sensors will need to observe the land surface in greater detail than the current generation of EOS sensors do. The resolution of NASA’s Landsat (top) is not high enough to distinguish changes on individual plots of land, like this plantation on Borneo. Running thinks that high-resolution sensors like Ikonos (a commercial satellite) will be needed to precisely monitor future changes. (NASA Landsat image by Jesse Allen and Robert Simmon. Ikonos image ©2003 GeoEye.)

Some of the things we need to know about vegetation and land cover for carbon monitoring can be learned by the current generation of EOS satellites. EOS has pioneered monitoring global deforestation rates, and disturbance impacts from wildfires and hurricanes. But for future investment purposes, boundaries of different land ownerships must be clear, so a very detailed view of the ground (higher spatial resolution) combined with frequent images (a high repeat cycle) processed automatically for change detection will be an essential part of any carbon monitoring system. This is a combination of sensor characteristics that EOS did not have. I think that a satellite-based carbon-monitoring system will need to provide regular, global data at about 1-2 meter resolution to show landcover change, such as forest clearing or abandonment of marginal cropland. The data should be available to all countries on a fair and necessary basis for policy verification. Comprehensive global monitoring is being planned under the title GEOSS (Global Environmental System of Systems), which relies heavily on the EOS heritage. Global carbon monitoring that started as a scientific endeavor may soon have economic and legal dimensions.