A Global View of Glaciers

Glaciers are rivers of frozen ice, fed by snowfall at high-latitude or high-altitude locations that stay cool year round. Some glaciers slide off the edges of giant ice sheets in the Arctic and Antarctic. Others flow across high plateaus or down the slopes of mountains at middle latitude and even tropical locations. In all, about 10 percent of Earth’s land surface is covered with ice, divided into roughly 200,000 glaciers.

Glaciers are found at high altitudes or high latitudes. (Map by Robert Simmon, using data from the Randolph Glacier Inventory and Natural Earth.)

As part of the European Space Agency’s GlobGlacier project, Casey spent three years developing better techniques to tally and monitor all of this ice from space. Getting an exact count is more challenging than it sounds because researchers have to contend with cloud cover; debris that makes it difficult to detect ice boundaries; and glaciers that splinter into small pieces as they recede—pieces too small for satellites to distinguish. 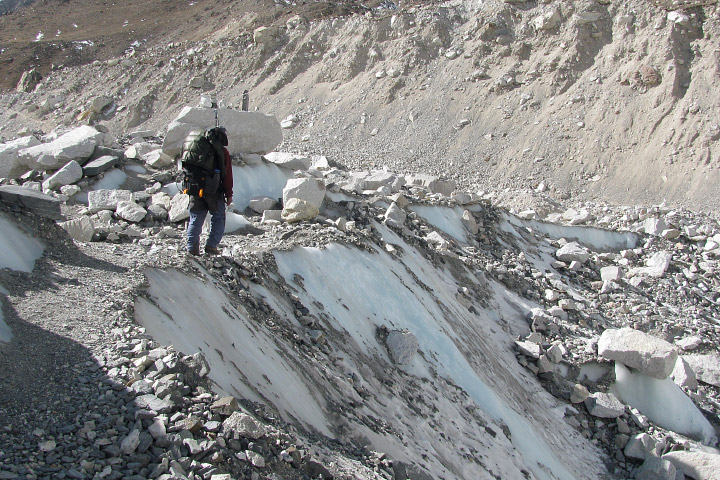 Debris on the surface of the Khumbu Glacier, near Everest Base Camp, Nepal. (Photograph ©2009 Kimberly Casey.)

There has been no shortage of receding glaciers to track. Satellite, aircraft, and ground-based data have documented widespread ice loss over the past few decades. An analysis by the World Glacier Monitoring Service found that 87 percent of the world’s 2,100 best-studied glacier fronts had retreated between 2000 and 2005.

While the overall trend is toward retreat, there’s much scientists are still sorting out about how and when glaciers shrink or grow. In some basins, adjacent glaciers with the same temperature and precipitation conditions behave in radically different ways. In other basins, ice mass is being lost much more rapidly than expected. And glaciers in some areas, like those in the Karakoram Range of central Asia, have been gaining mass over the past few decades.

Some glaciologists suspect that thin layers of particulates and thick layers of debris are blanketing glaciers and may be contributing to the discrepancies. But there’s still no record of particulate or debris layers in most glacier inventories, so there’s no shortage of questions. Which types of particulates have the most influence? Which have the least? Which types coat which glaciers? How much does thickness or composition matter? 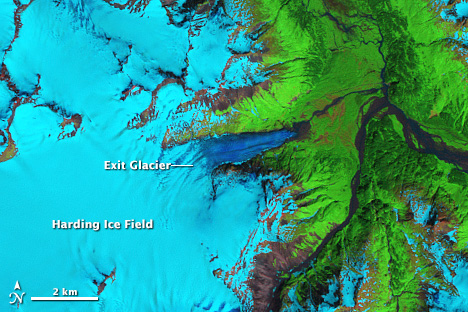 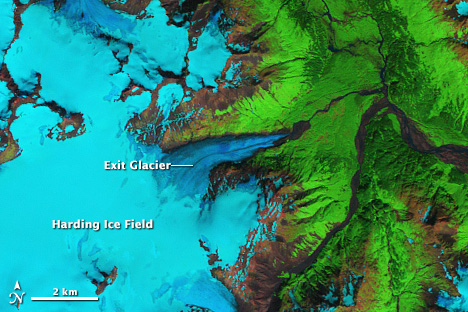 Debris along the margin of Alaska’s Exit Glacier makes it hard to determine how much the ice retreated from July 1986 to August 2009. Casey’s research is helping to refine techniques for differentiating rock-covered ice from the material left behind by a retreating glacier. (NASA images by Robert Simmon, using Landsat 5 data.)

“We need a much better understanding of all the particulates and debris types on the ice to understand how glaciers are responding to climate change,” Casey said. “And we simply do not have resources to send people out into the field to collect samples and measurements on all of these glaciers. That’s where satellites prove invaluable.”