15:25:09 UTC: Having turned 86.466 degrees to the right, Aqua’s onboard computer notes the next command in its queue: fire the thrusters for 550 seconds (9 minutes, 10 seconds). Propellant flows into the thrusters, and the planned burn begins.

In a third room off Mission Control, Josh Levi and his team of flight dynamics engineers are tracking the burn. They planned the maneuver, and at the end of the day, they will analyze the results to see where the satellite ended up. This is the eighth of nine maneuvers that will together move Aqua a tenth of a degree. This maneuver should move the satellite 6.2 meters to change the orbit by 0.00977 degrees—not quite a hundredth of a degree. It’s a tiny distance, but it is as far as the team can safely move the satellite in the time they have before Aqua returns to the daylight part of its orbit. The last maneuver, number seven, was intended to move Aqua 0.00973 degrees. The actual movement amounted to a change of 0.01002 degrees. Based on these results, Levi adjusted today’s plan to keep the satellite on target. 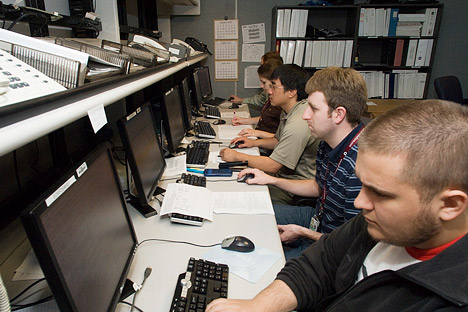 Planning the maneuver is no simple thing. “Aqua doesn’t fly alone,” says Aqua mission director William Guit. Aqua is the lead satellite in the A-train, a constellation of five satellites flying in the same orbit like a train. The idea is to collect data from the same place at about the same time to make comparisons between the instruments easier. Every move that Aqua makes has to be coordinated with the other satellite teams to maintain the constellation. During the two-month period that Aqua makes its nine maneuvers, all of the other satellites have to be adjusted as well, and all that movement has to be coordinated. Communications engineer Frank Wright in Levi’s group coordinates the moves with all of the other teams. 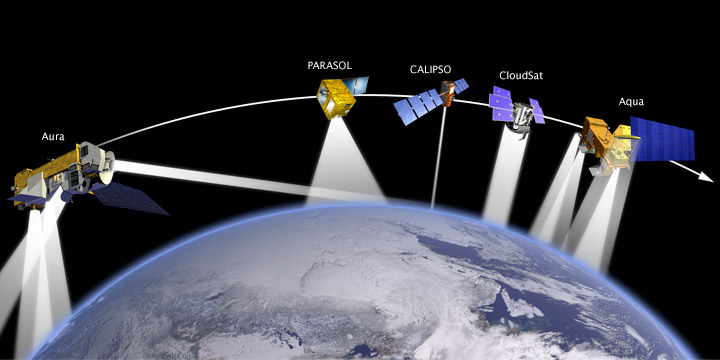 Aqua leads the constellation of satellites that make up the A-train. Aqua is closely followed by Cloudsat, CALIPSO, and Parasol. Aura is the last satellite in the group. Any adjustment in the orbit of one satellite must be accommodated by the other satellites to maintain the formation. Constellation flying enables the satellites to record nearly concurrent data. (NASA image courtesy EOS Project Science Office.)

The team also has to coordinate with the various science teams to make sure the maneuver doesn’t affect data during a crucial period like a field campaign. The coordination takes time. This series of maneuvers has taken more than a year to plan, negotiate, and coordinate, and Levi is already thinking about the next set in 2010. But the planning is easier now than it had been in the early stages of the mission, when no one was certain how the satellite would respond to the maneuver commands, and the flight teams had to develop contingency plans for every possible outcome.

Now, the team is comfortable with the maneuvers. Many members of the teams are also on the flight teams for the Aura satellite, another member of the A-train, which is undergoing orbital adjustments in step with Aqua. The day before the maneuver, number eight of nine, the flight dynamics team met with the flight operations team and the Aqua mission director to go over the results of the previous maneuver and present the plan for the next. The flight dynamics team presented their plan for the maneuver, which the operations team would carry out. After six weeks of maneuvers, the process had become so smooth that the meeting flowed quickly. The only debated point had been to decide who was bringing breakfast and whether it should be bagels or donuts. 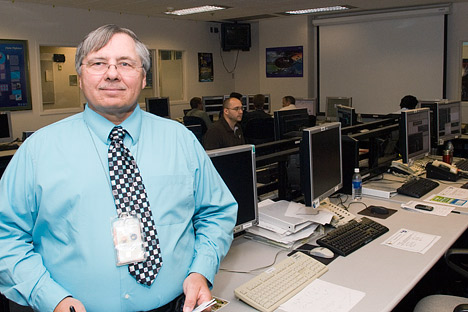 “149.9. You were right, Jamie.” Command and data handling subsystem engineer Jake Simmons does not say this into the official SCAMA, but turns from his station to announce these results to Pawloski. He is referring to the longitude over which the satellite completed its burn, which tells them where the satellite is. “We all guess how close to predicted we are performing,” Pawloski says. It’s not too surprising that the lead engineer came closest. Pawloski has been on Aqua’s flight team since before the satellite launched in 2002.

15:34:49 UTC: Aqua notes again that there is a large error in its slew angle: in fact, it’s facing the wrong direction entirely. It fires its thrusters for a third time and begins to turn the spacecraft back towards the front.

“Beginning slew back,” Blanchard’s voice reports over the SCAMA. Sixteen minutes 49 seconds left. The tension in the room rises slightly. This time, everyone tracks the turn.

A figure on Pawloski’s screen shows that the satellite is 30 degrees away from facing front. “We’re in a race against time,” he explains, watching the figure. The Moderate Resolution Imaging Spectroradiometer (MODIS) sensor is sensitive to direct light from the Sun. If the satellite is not back to within 20 degrees of facing front by 15:47:23 UTC—the countdown clock will say 4 minutes, 23 seconds—a safety door will automatically close over the sensor, both shielding it from harm and making it impossible to collect data.

Four minutes: a number one flashes on Palowski’s screen under a timeline of the maneuver. The satellite had turned itself enough that MODIS’ safety commands did not initiate, but the information is just reaching his screen.

15:46:34 UTC: Aqua has fully turned and is in position to resume its mission of monitoring Earth’s water systems.

The maneuver itself complete, the team has to reset the satellite to get it ready to collect data. When Aqua comes back into view of the communications satellite a few seconds later, they shut off the valve that allows fuel to flow into the thrusters and reset the instrument safety protocols that had been turned off during the maneuver. This done, it only takes seconds for the mission control center to empty.

Dan Knutsen, Aqua’s flight software engineer, monitors the execution of the command sequences he developed for the maneuver while instrument engineer Carlos Hester looks on. Hester ensures that Aqua’s instruments are secured during the maneuver and returns them to science mode to collect data after the maneuver is complete. (Photograph courtesy William Hrybyk, NASA GSFC.)

Author’s note: Many thanks to the Aqua and Aura flight dynamics and flight observation teams for allowing me to follow them around and pester them with questions during a busy time. Thanks especially to Bill Guit, Jamie Pawloski, Dimitrios Mantziaras, Josh Levi, David Tracewell, and Frank Wright.