The amount of energy required to launch a satellite into orbit depends on the location of the launch site and how high and how inclined the orbit is. Satellites in high Earth orbit require the most energy to reach their destination. Satellites in a highly inclined orbit, such as a polar orbit, take more energy than a satellite that circles the Earth over the equator. A satellite with a low inclination can use the Earth’s rotation to help boost it into orbit. The International Space Station orbits at an inclination of 51.6397 degrees to make it easier for the Space Shuttle and Russian rockets to reach it. A polar-orbiting satellite, on the other hand, gets no help from Earth’s momentum, and so requires more energy to reach the same altitude. 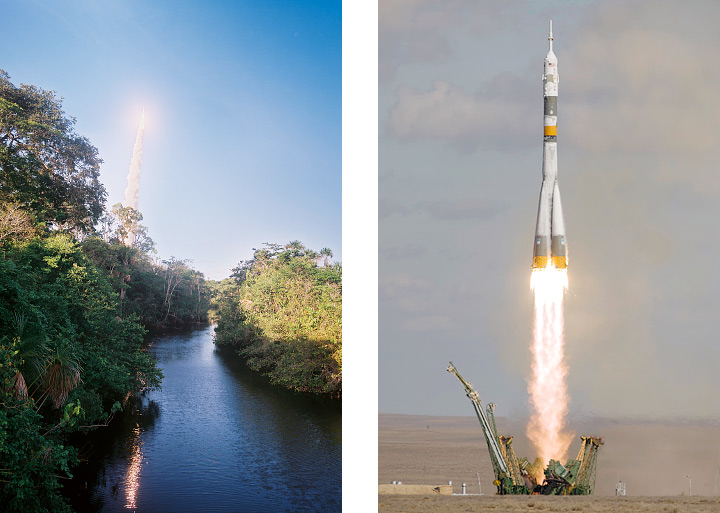 Satellites in low-inclination orbits can get an energy boost from the Earth’s rotation by being launched near the equator. The European Space Agency launches satellites into geostationary orbits from their facilities in French Guiana (left). On the other hand, high-inclination satellites don’t receive much benefit from equatorial launch sites. The Baikonur Cosmodrome (right), located at 49° north, is frequently used to launch satellites into polar and Molniya orbits, as well as to send astronauts and supplies to the International Space Station. [Photographs ©2008 ESA/CNES/ARIANESPACE/Activité Photo Optique Video CSG (left) and courtesy NASA (right).]

Once a satellite is in orbit, it usually takes some work to keep it there. Since Earth isn’t a perfect sphere, its gravity is stronger in some places compared to others. This unevenness, along with the pull from the Sun, Moon, and Jupiter (the solar system’s most massive planet), will change the inclination of a satellite’s orbit. Throughout their lifetime, GOES satellites have to be moved three or four times to keep them in place. NASA’s low Earth orbit satellites adjust their inclination every year or two to maintain a Sun-synchronous orbit.

Atmospheric drag is stronger when the Sun is active. Just as the air in a balloon expands and rises when heated, the atmosphere rises and expands when the Sun adds extra energy to it. The thinnest layer of atmosphere rises, and the thicker atmosphere beneath it lifts to take its place. Now, the satellite is moving through this thicker layer of the atmosphere instead of the thin layer it was in when the Sun was less active. Since the satellite moves through denser air at solar maximum, it faces more resistance. When the Sun is quiet, satellites in low Earth orbit have to boost their orbits about four times per year to make up for atmospheric drag. When solar activity is at its greatest, a satellite may have to be maneuvered every 2-3 weeks.

The third reason to move a satellite is to avoid space junk, orbital debris, that may be in its path. On February 11, a communication satellite owned by Iridium, a U.S. company, collided with a non-functioning Russian satellite. Both satellites broke apart, creating a field of debris that contained at least 2,500 pieces. Each piece of debris was added to the database of more than 18,000 manmade objects currently in Earth orbit and tracked by the U.S. Space Surveillance Network.

NASA satellite mission controllers carefully track anything that may enter the path of their satellites. As of May 2009, Earth Observing satellites had been moved three separate times to avoid orbital debris.

Thousands of manmade objects—95 % of them “space junk”— occupy low Earth orbit. Each black dot in this image shows either a functioning satellite, an inactive satellite, or a piece of debris. Although the space near Earth looks crowded, each dot is much larger than the satellite or debris it represents, and collisions are extremely rare. (NASA illustration courtesy Orbital Debris Program Office.)

Orbiting objects are concentrated in low Earth orbit (nearly obscuring the Earth’s surface in this illustration) and geostationary orbit (revealed by the ring of satellites along the outer edges). (NASA illustration courtesy Orbital Debris Program Office.)

Mission control engineers track orbital debris and other orbiting satellites that could come into the Earth Observing System’s orbit, and they carefully plan avoidance maneuvers as needed. The same team also plans and executes maneuvers to adjust the satellite’s inclination and height. The team evaluates these planned maneuvers to ensure that they do not bring the EOS satellites into close proximity to catalogued orbital debris or other satellites. To peek in on a day in the mission control center during one such maneuver, see the related article Flying Steady: Mission Control Tunes Up Aqua’s Orbit.