A Better Map of the Forest and the Trees

Now 18 months into the research program, the team has a collection of measurements from all four seasons of the northwest Atlantic. They have two more research expeditions planned for the summer and fall of 2011. And there are years of data crunching and analysis ahead to answer fundamental questions about how plankton will respond to a warming climate.

Some scientists have theorized that as air and ocean temperatures rise, productivity will decline because many of the better-known species grow best at temperatures that might be eclipsed. Warmer ocean temperatures also could increase the stratification, or layering, of the water column, which would inhibit the flow of nutrients up from the depths. Like land plants, plankton need nutrients to grow.

Using existing ocean measurements, several research groups have detected recent declines in phytoplankton growth and abundance. One analysis revealed a decline of 6 percent since the 1980s, with 70 percent of the change coming at high latitudes. That decline coincided with a global increase in sea surface temperatures of 0.2 degrees Celsius. Another analysis found that chlorophyll has declined in eight of ten ocean regions since 1899, with a global rate of decline of 1 percent per year. 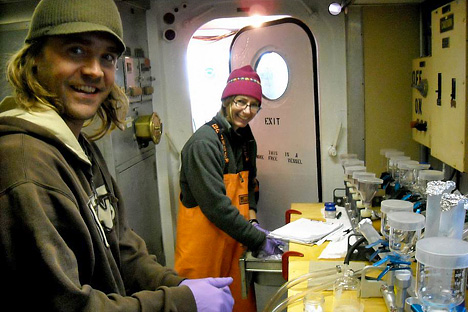 But that doesn’t match the preliminary findings from Mulholland, Mannino, and Hyde, who are looking close-up view at the waters on the continental shelves—where climate variability and human disruptions are most intensely felt. In earlier studies from the Chesapeake Bay to Delaware Bay, Mulholland found phytoplankton productivity was higher than models said it should be. Likewise so far in CliVEC.

“Is productivity increasing? Is this eutrophication? Is it climate? Or have we just undersampled in the past?” Mulholland asks. “We really don’t know the direction that ocean productivity will take with climate change, and we don’t know enough about what is already out there.”

“More carbon dioxide will make the ocean more acidic. Will that stimulate the growth of some phytoplankton while reducing that of others?” she adds. “If productivity is stimulated, will it be the types of algae that fuel the fisheries we want?”

More carbon might mean more cyanobacteria or more harmful algal blooms. It might mean new species come to dominate regions that once were balanced by other species.

“The major challenge in the study of ocean productivity is the characterization of physiological variability,” said Behrenfeld. “In other words, how ‘healthy’ are the phytoplankton? How fast are they growing? What conditions are they acclimated to?”

The global view of the oceans is important. But like so much else in climate science, it’s now time to examine the local expressions of global changes. Each coastal system has some similarities, but each is also unique. 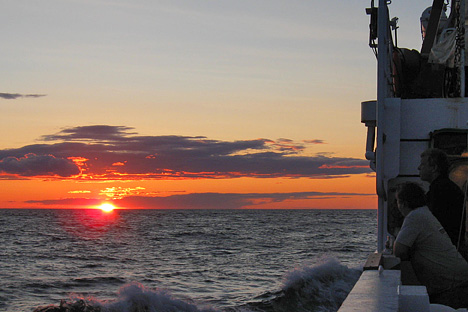 As the Sun sets on the Delaware II. and CliVEC field work, it is just rising on the effort to turn observations into a new day for satellite ocean sensors. (Photograph courtesy Michael Novak, NASA.)

By satellite and by sea, Mannino and Mulholland want to focus science more clearly on the regional views of ocean productivity. And they are prepared to keep riding into rough seas to get that view.

Funding for this research was provided by NASA, with NOAA providing support through ship time on the Delaware II in conjunction with the EcoMon program.