In small, real-world samples and on the blackboard, oceanographers have long shown that weather, climate change, huge doses of nutrients, and massive plankton blooms can affect the biology and chemistry of coastal oceans. But those field measurements have been limited, which led researchers to look to satellites for broader and longer-term observations.

Since the launch of the Coastal Zone Color Scanner (CZCS) on the Nimbus 7 satellite in 1978, scientists have used various instruments to examine the color of the ocean. That color is determined by how sunlight interacts with the particles, plants, and chemicals floating in the water. Nearly all phytoplankton, for instance, contain chlorophyll, which absorbs light at blue and red wavelengths and reflects green back into space. By observing the greenness of the ocean, scientists can say something about where marine plants are blooming and their abundance near the surface.

For the past decade, most ocean productivity measurements have come come from the Sea-viewing Wide Field-of-View Sensor (SeaWiFS), launched on the SeaStar satellite in 1997, and the Moderate Resolution Imaging Spectroradiometer on NASA’s Aqua satellite. These data are processed and distributed by NASA Goddard’s Ocean Biology Processing Group, and they have been invaluable for assembling a truly global view of primary productivity.

Still, that view can be imprecise and blurry, depending on where you look and what you want to see. “The existing satellite sensors are limited in their color range and resolution, which can make it difficult to accurately separate the different components of the ecosystem,” says Mike Behrenfeld, an oceanographer from Oregon State University who specializes in ocean productivity. “Most of the methods for analyzing ocean color were created for the global ocean, not the more complicated coastal areas.” 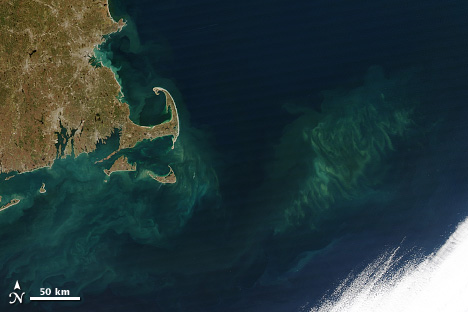 Sediments and pollution in near-shore waters can mislead satellites into over- and under-estimating the amount of chlorophyll in the water, particularly after the passing of storms that stir up the bottom. (NASA Earth Observatory images by Jesse Allen & Robert Simmon, based on MODIS data.)

Coastal waters are murky with sediments, nutrients, and other dissolved organic compounds. They are also turbulent, with a lot of mixing between the surface and deep water. This natural “noise” distorts the signal back to the satellites, causing over- and under-estimates of phytoplankton blooms. That matters because coastal waters account for a significant amount of the overall productivity (15 to 21 percent annually), and the majority of activity that affects human uses of the ocean.

A goal of CliVEC is to improve measurements of color and other features in the coastal ocean, and to find new ways to use those surface measurements to determine what is happening deeper in the water column. “Satellites only see the surface” says Mulholland. “But we know that surface productivity is not the whole picture. The chlorophyll maximum is often not even at the surface.”

For several years, Mannino and Mulholland have assessed the abundance and productivity of plankton in the waters off of Delaware and Virginia. The CliVEC study is allowing them to expand that work northward. The research team has made five trips so far on the Delaware II—August and November 2009; February, May, and November 2010—to collect the samples necessary to evaluate satellite data and formulas. The work has been piggybacked on trips made for the Ecosystem Monitoring program of the NOAA Fisheries Service.

The CliVEC team chose to sample in locations where a satellite would pass overhead within three hours of their measurements. They focused on the properties and clarity of the water in the euphotic zone (Greek for “good light”), where sunlight can penetrate and allow plants to photosynthesize. (In coastal waters, that’s usually the upper 1 to 50 meters.) They deployed sensors to measure dissolved oxygen and carbon, suspended particles, salinity, temperature, chlorophyll, and the amount of light available for photosynthesis. 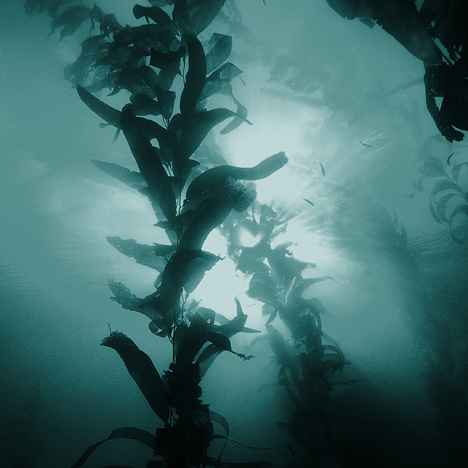 Sunlight rarely penetrates more than 100 meters (330 feet) into the ocean, less in coastal waters. Yet more than half to two thirds of the photosynthesis on Earth occurs in this “euphotic zone,” just out of sight of satellites. (Photograph © 2007 PacificKlaus.)

“Satellite data are only as good as the field measurements,” says Mannino. “We must collect and analyze samples and conduct experiments to make sure that what the satellites see is what is really happening in the water.”

Much of the time, the chlorophyll maximum, the region of greatest phytoplankton concentrations, has been at depth, out of the view of satellite sensors. By matching the measurements from those depths to the satellite views, the scientists should be able to improve models of ocean productivity and add precision to the ocean color observations. They should also help sharpen the satellite vision of tomorrow.