The way in which humidity and rising air masses lead to saturation of the atmosphere and cloud formation in the tropics is a bit different from the way in which those dynamics occur at mid-latitudes. So, in his experiment, Lindzen decided to confine his focus to the tropics. But there is such an intimate relationship between clouds and water vapor in the tropics that it is difficult to get a clear picture of just what the water vapor is doing.

Lindzen says he was influenced by an image produced using data from the Special Sensor Microwave Water Vapor Sounder (SSM/T-2), flying aboard a U.S. military satellite. “The image made it clear that in the tropics you have regions of high humidity and regions of low humidity, separated by sharp boundaries,” he recalls. “At first, we were looking at how humidity changed in the clear regions and we didn’t have a good handle on how the relatively cloudy areas changed. Slowly, it dawned on us that, in the tropics, clouds moisturize the air around them. Clouds are a major source of moisture.”

Carbon dioxide is the most frequently mentioned greenhouse gas, but water vapor absorbs infrared (heat) radiation much more strongly. Carbon dioxide is significant because it closes a “window” that would otherwise allow certain infrared wavelengths to escape the Earth’s water vapor blanket. The graph at left shows the percentage of energy absorbed in a clear tropical sky by water vapor (green) and carbon dioxide (brown). (Graph by Robert Simmon, based on model data from the NASA GSFC Laboratory for Atmospheres)

Humid and dry regions of the tropical atmosphere are very distinct. The image at left shows humidity measured by the SSM/T-2 Atmospheric Water Vapor Profiler at pressures ranging from 250 to 600 millibars (the mid-troposphere; note that the black areas in this image are where no data was collected). Lindzen reasons that areas of low humidity (white) opening and closing helps regulate the temperature of the Earth. Lindzen further hypothesizes that high sea surface temperatures would create storms that precipitated more efficiently, reducing the size of humid areas in the atmosphere. By linking the two ideas he came up with a mechanism that effectively offsets global warming due to a buildup of greenhouse gases by allowing more heat to escape to space. (Image from the IPCC report Climate Change 2001: The Scientific Basis)

So Lindzen’s team shifted its focus to clouds instead of humidity and used the Japanese Geostationary Meteorological Satellite-5 to make their measurements. That satellite, they reasoned, would provide them the best resolution over both time and space to meet their objective. That satellite’s field of view concentrated their focus on a large patch of Earth ranging from 30°N latitude to 30°S, and 130°E longitude to 170°W. This patch spans an area bordered by the Indonesian Archipelago to the west, the center of the Pacific Ocean to the east, southern Japan to the north, and southern Australia to the south. This area contains the world’s largest and warmest body of water, known as the Indo-Pacific Warm Pool. Lindzen wanted to find out how the types and extent of clouds vary as a function of underlying sea surface temperature.

This is the finding that led Lindzen’s team to propose that the Earth has an adaptive infrared iris—a built in “check-and-balance” mechanism that effectively counters global warming (Lindzen et al. 2001). Much like the iris in a human eye contracts to allow less light to pass through the pupil in a brightly lit environment, Lindzen suggests that the area covered by high cirrus clouds contracts to allow more heat to escape into outer space from a very warm environment. 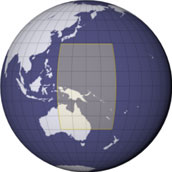 Lindzen’s team studied the relationship between sea surface temperature and cloud extent in the area of the Indo-Pacific Warm Pool, shown above in yellow. (Map by Robert Simmon)