Learning from the Scars

Beyond understanding the fires and their effects on the atmosphere, other scientists and conservation groups are mining satellite data in order to reduce the use of fire. The World Resources Institute and World Wildlife Fund Indonesia both maintain online tools to overlay active fire data from NASA satellites with other layers of data—such as the locations of conservation lands and areas designated for oil palm, pulp wood, and logging. These tools have been used to pinpoint companies or individuals that light fires illegally. 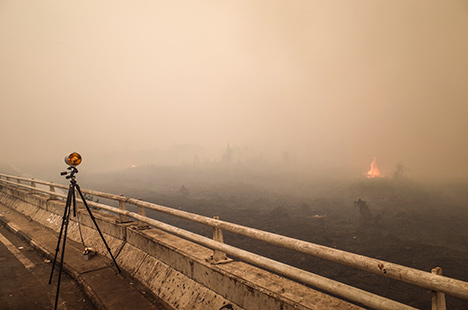 During the worst of the fires, severely decreased visibility made driving hazardous and led to the cancellation of many flights. (Photo by Martin Wooster.)

However, some researchers caution against using satellite observations alone to assign blame for particular fires. A tangle of national, provincial, and tribal laws can lead to confusion over who owns a given parcel of land, explained David Gaveau, a remote sensing scientist with the Center for International Forestry Research.

In some cases, Gaveau and colleagues have merged satellite data and investigations on the ground to arrive at counterintuitive findings. For instance, after fires in 2014, Gaveau used imagery from Landsat 8, along with ground-based investigations of burn sites, to show that two fires in Sumatra that had burned on large commercial plantations either started outside of the plantations and burned their way in, or they began on land occupied by small-scale farmers within the plantations.

“While our analysis should not be read as completely absolving companies—as companies have in the past used fire to clear land—it does show that the situation on the ground is more complex than is often portrayed,” noted Gaveau in a blog post.

Meanwhile, Field and researchers at Columbia have yet another goal: minimizing the damage from future fire seasons. They are developing and promoting new weather and fire forecasting capabilities that could help Indonesians better manage the use of fire. 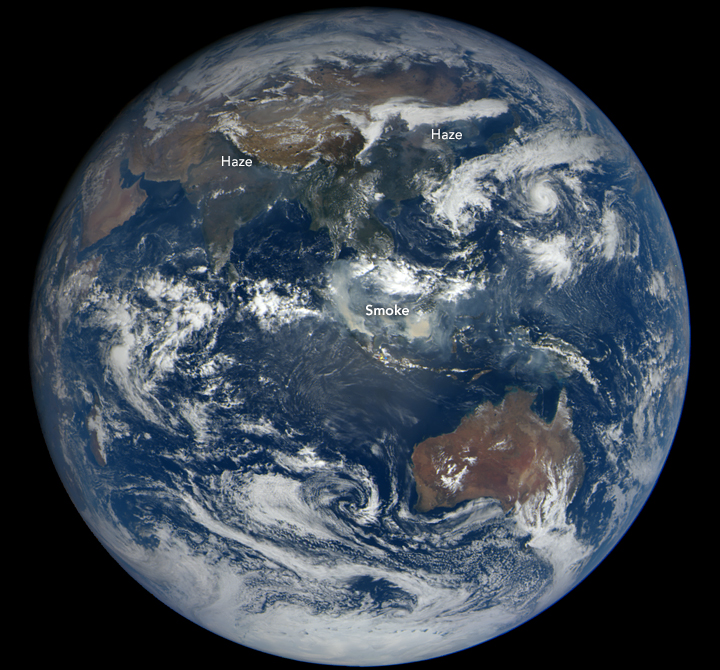 The impact of Indonesia’s fires was felt across tropical Asia. On October 21, 2015, the Earth Polychromatic Imaging Camera aboard the DSCOVR satellite acquired this view of smoke drifting over the region. (NASA image courtesy of the DSCOVR EPIC team.)

In 2015, meteorologists and climatologists knew that dry weather was coming well before it arrived; this was largely due to El Niño conditions. “There was at least a one-month window when preparedness measures could have been taken before the situation deteriorated in August,” said Field. “Early warning systems will not address underlying socioeconomic causes of the fire, of course, but the need for systematic early warnings is urgent. The science is maturing to the point where we have a real opportunity to start responding to forecasts rather than to crises.”