Dried Out by Nature and Man

Given the moist climate of Indonesia, you would think fires could rarely burn out of control. The tropical nation is rich with rainforests, swamps, and bogs wet enough to suppress fire. Yet in recent decades, these ecosystems have been dramatically altered by human activity. In many places, networks of drainage canals have dried out the wetlands and lowered the water table. The canals are often the first step in a multi-year process designed to transform swamps and forests into farmland.

Crops and lush vegetation thrive around Mount Kerinci. Fire is mostly a manmade problem in this tropical environment. (Photo by Buitenzorger, adapted under a Creative Commons license.)

The second step is usually fire. Most fires in Indonesia are set for agricultural purposes—mainly to clear land or fertilize the soil for future plantings. There are other ways to clear land, but none as cheap and quick as burning. In some cases, small-scale sustenance farmers engage in slash-and-burn agriculture. In others, industrial-scale farm operators or mid-sized landowners light fires to clear the way for palm oil, wood pulp, and rubber harvesting.

By comparing satellite observations of fires with land cover data from Indonesia’s department of forestry, Columbia University’s Miriam Marlier found that 41 percent of fire emissions in Sumatra come from lands managed by either the oil palm, timber, or logging industries. In Kalimantan (Borneo), 27 percent of fire emissions come from these industries.

“We do not have the numbers for the 2015 fires yet, but pinning all the blame on large plantations operated by the oil palm industry, as is often done, is an oversimplification,” said Ruth DeFries, one of the scientists involved in the research. The expansion of small-scale agriculture (plots smaller than 2 hectares) and of small to medium-sized (larger than 100 hectares) commercial plantations also contributes significantly to smoke emissions.

In most years, growers keep the fires under control. But 2015 was anything but normal. An unusually strong El Niño has been developing in the Pacific Ocean, and as a result, weather patterns shifted in ways that made Indonesia’s dry season even drier.

Satellite observations of rainfall over Indonesia, captured by the Global Precipitation Measurement (GPM) mission, reveal the diminished rainfall during the fire season. Plenty of rain fell in northern Sumatra in September, but almost none fell over southern Sumatra. The same was true of Borneo: rain fell in Malaysia, while Central and South Kalimantan were dry. 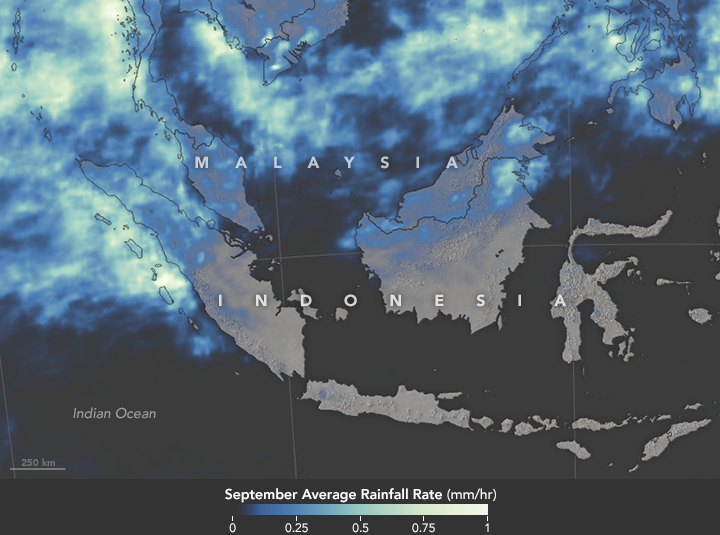 Meanwhile, the troubles in Indonesia extended below the lush land surface. Coastal Sumatra and Borneo are home to some of the most extensive tropical peat deposits in the world. Peat is a soil-like mixture of partly decayed plant material that builds up in wetlands, swamps, and partly submerged landscapes.

Since peat forms mostly underwater, the carbon in plant material is not broken down by oxygen-dependent bacteria, which normally release carbon dioxide from soils back into the atmosphere. Instead, peat acts like a sponge for carbon. In the tropics, underground peat soils store about ten times as much carbon as the above-ground ecosystems. Collectively, the world’s peatlands are believed to hold about 500 billion metric tons of carbon; Indonesia’s peat swamp forests store about one-sixth of that carbon.

But when swamps with underlying peat are drained, the bacterial communities shift. The peat begins to emit carbon dioxide into the atmosphere as it decomposes, and burning dried peat greatly accelerates the process. According to Vrije Universiteit Amsterdam scientist Guido van der Werf, peat fires release three times as much carbon monoxide and ten times as much methane as savanna or grassland fires. Peat fires also tend to burn at low temperatures and can smolder underground, so they are notoriously difficult to extinguish, sometimes burning for months.

For all of these reasons, the climate consequences of Indonesia’s fires pile up quickly. According to van der Werf’s analysis of Indonesia’s emissions, the 2015 fires released 1.75 billion tons of greenhouse gas equivalents—more than Japan emits in a year. On the worst days, the Indonesian fires emitted as much or more carbon as all of the economic activity in the United States generates on an average day.