Any changes to the Earth’s climate system that affect how much energy enters or leaves the system alters Earth’s radiative equilibrium and can force temperatures to rise or fall. These destabilizing influences are called climate forcings. Natural climate forcings include changes in the Sun’s brightness, Milankovitch cycles (small variations in the shape of Earth’s orbit and its axis of rotation that occur over thousands of years), and large volcanic eruptions that inject light-reflecting particles as high as the stratosphere. Manmade forcings include particle pollution (aerosols), which absorb and reflect incoming sunlight; deforestation, which changes how the surface reflects and absorbs sunlight; and the rising concentration of atmospheric carbon dioxide and other greenhouse gases, which decrease heat radiated to space. A forcing can trigger feedbacks that intensify or weaken the original forcing. The loss of ice at the poles, which makes them less reflective, is an example of a feedback. 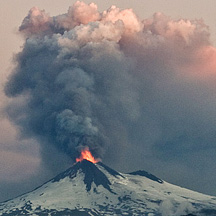 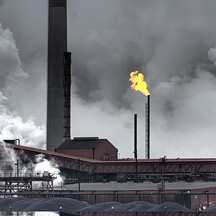 Things that change the balance between incoming and outgoing energy in the climate system are called forcings. Natural forcings include volcanic eruptions. Manmade forcings include air pollution and greenhouse gases. A climate forcing, such as greenhouse gas increases, may trigger feedbacks like the loss of sunlight-reflecting ice. (Photographs ©2008 antonio, ©2008 haglundc, and courtesy Mike Embree/National Science Foundation.)

All atmospheric gases have a unique pattern of energy absorption: they absorb some wavelengths of energy but are transparent to others. The absorption patterns of water vapor (blue peaks) and carbon dioxide (pink peaks) overlap in some wavelengths. Carbon dioxide is not as strong a greenhouse gas as water vapor, but it absorbs energy in wavelengths (12-15 micrometers) that water vapor does not, partially closing the “window” through which heat radiated by the surface would normally escape to space. (Illustration adapted from Robert Rohde.)

The absorption of outgoing thermal infrared by carbon dioxide means that Earth still absorbs about 70 percent of the incoming solar energy, but an equivalent amount of heat is no longer leaving. The exact amount of the energy imbalance is very hard to measure, but it appears to be a little over 0.8 watts per square meter. The imbalance is inferred from a combination of measurements, including satellite and ocean-based observations of sea level rise and warming.

When a forcing like increasing greenhouse gas concentrations bumps the energy budget out of balance, it doesn’t change the global average surface temperature instantaneously. It may take years or even decades for the full impact of a forcing to be felt. This lag between when an imbalance occurs and when the impact on surface temperature becomes fully apparent is mostly because of the immense heat capacity of the global ocean. The heat capacity of the oceans gives the climate a thermal inertia that can make surface warming or cooling more gradual, but it can’t stop a change from occurring.

The changes we have seen in the climate so far are only part of the full response we can expect from the current energy imbalance, caused only by the greenhouse gases we have released so far. Global average surface temperature has risen between 0.6 and 0.9 degrees Celsius in the past century, and it will likely rise at least 0.6 degrees in response to the existing energy imbalance.

As the surface temperature rises, the amount of heat the surface radiates will increase rapidly (see description of radiative cooling on Page 4). If the concentration of greenhouse gases stabilizes, then Earth’s climate will once again come into equilibrium, albeit with the “thermostat”—global average surface temperature—set at a higher temperature than it was before the Industrial Revolution.