Note: Determining exact values for energy flows in the Earth system is an area of ongoing climate research. Different estimates exist, and all estimates have some uncertainty. Estimates come from satellite observations, ground-based observations, and numerical weather models. The numbers in this article rely most heavily on direct satellite observations of reflected sunlight and thermal infrared energy radiated by the atmosphere and the surface.

Earth’s heat engine does more than simply move heat from one part of the surface to another; it also moves heat from the Earth’s surface and lower atmosphere back to space. This flow of incoming and outgoing energy is Earth’s energy budget. For Earth’s temperature to be stable over long periods of time, incoming energy and outgoing energy have to be equal. In other words, the energy budget at the top of the atmosphere must balance. This state of balance is called radiative equilibrium. 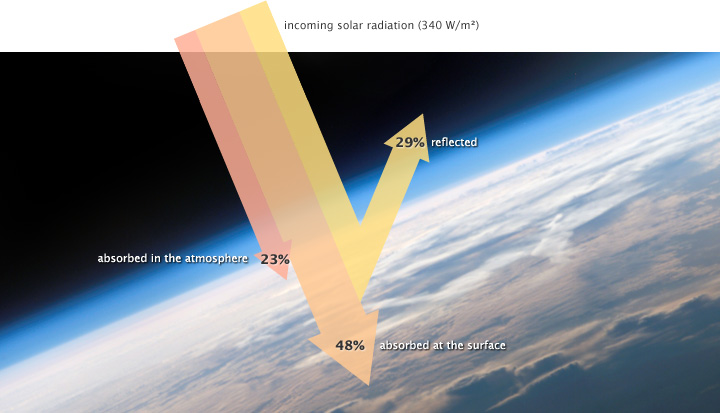 Of the 340 watts per square meter of solar energy that falls on the Earth, 29% is reflected back into space, primarily by clouds, but also by other bright surfaces and the atmosphere itself. About 23% of incoming energy is absorbed in the atmosphere by atmospheric gases, dust, and other particles. The remaining 48% is absorbed at the surface. (NASA illustration by Robert Simmon. Astronaut photograph ISS013-E-8948.)

When matter absorbs energy, the atoms and molecules that make up the material become excited; they move around more quickly. The increased movement raises the material’s temperature. If matter could only absorb energy, then the temperature of the Earth would be like the water level in a sink with no drain where the faucet runs continuously.

Temperature doesn’t infinitely rise, however, because atoms and molecules on Earth are not just absorbing sunlight, they are also radiating thermal infrared energy (heat). The amount of heat a surface radiates is proportional to the fourth power of its temperature. If temperature doubles, radiated energy increases by a factor of 16 (2 to the 4th power). If the temperature of the Earth rises, the planet rapidly emits an increasing amount of heat to space. This large increase in heat loss in response to a relatively smaller increase in temperature—referred to as radiative cooling—is the primary mechanism that prevents runaway heating on Earth. 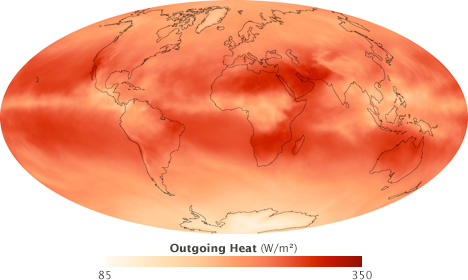 Absorbed sunlight is balanced by heat radiated from Earth’s surface and atmosphere. This satellite map shows the distribution of thermal infrared radiation emitted by Earth in September 2008. Most heat escaped from areas just north and south of the equator, where the surface was warm, but there were few clouds. Along the equator, persistent clouds prevented heat from escaping. Likewise, the cold poles radiated little heat. (NASA map by Robert Simmon, based on CERES data.)