Dusting the Virtues of Snow

A Little Bit of Dirt Means a Lot for Water Supplies

At least as far back as King David’s psalms and Isaiah’s prophecies, snow has been characterized as a symbol of purity. “Lawn [linen] as white as driven snow” was how Shakespeare once described it.

Beyond the symbolism, the purity of snow has consequences for society. Snow is a key source of water for drinking and irrigation. It is also Earth’s best method for reflecting sunlight back into space.

Tom Painter is very interested in the purity of snow. Based at NASA’s Jet Propulsion Laboratory and the University of California, Los Angeles, he studies how much water is stored in snowpack and how that snow looks to satellites. He also studies the effects of light-absorbing impurities—dark-colored particles like dust and soot that coat snow. 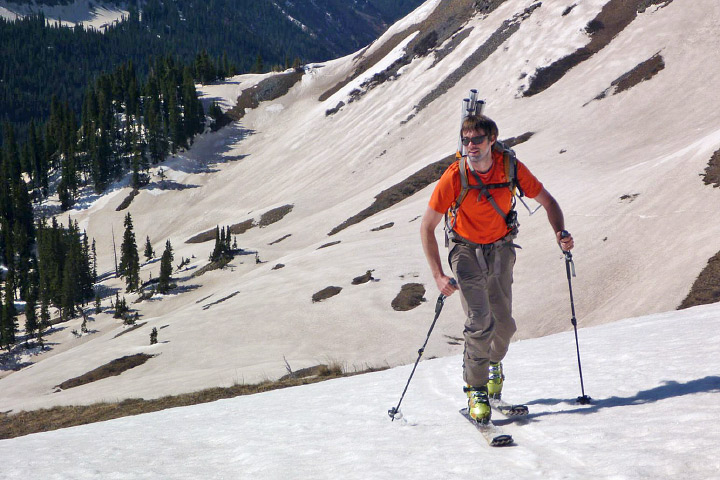 Researchers climbed the heights of Colorado’s San Juan Mountains to study the effects of dust on the snowpack in spring 2013. (Photograph ©2013 Jeff Deems, NSIDC.)

Dirty snow usually melts faster than fresh snow because it absorbs more energy from the Sun, and that’s not just a problem in sooty, gritty cities. Except for some mountains and high plateaus, snow cover naturally retreats from Earth’s surface in the spring and early summer. Dust on top of that snow significantly accelerates the process.

For nearly a decade, Painter and colleagues have been examining the effects of snow impurities in the mountains of the Colorado River Basin, using a combination of ground-based measurements, energy-balance towers, and satellite data. Aircraft-mounted instruments also have helped monitor snow cover and depth. All of that information is included in a computer model that Painter and his team use to estimate how much impurities enhance snowmelt. 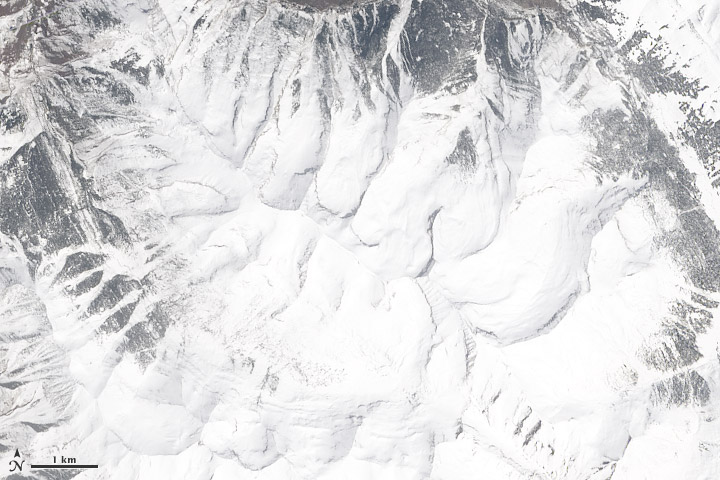 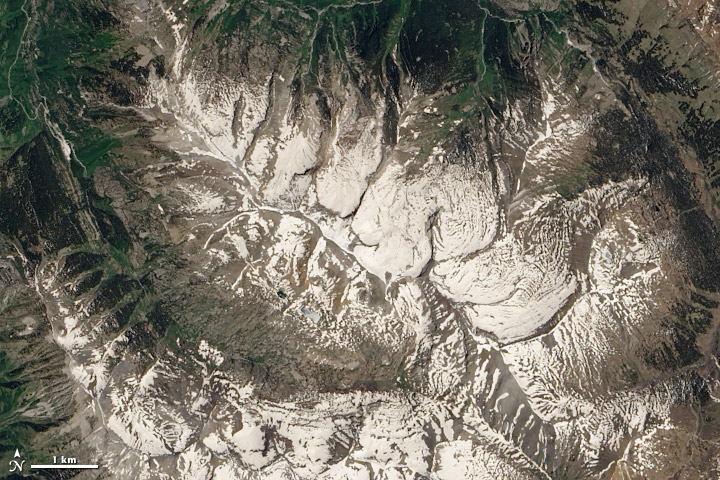 Fresh snow reflects 80 to 90 percent of the sunlight that falls on it. Dusty snow, however, only reflects 50 to 60 percent, absorbing the rest. These two Landsat 8 images show the mountains near Telluride, Colorado, on May 3 and June 20, 2013. (NASA Earth Observatory images by Robert Simmon, using data from Earth Explorer.)

The effects are surprisingly potent. “Dust on the snowpack of the Colorado River Basin can shorten the duration of snow cover by 21 to 51 days,” Painter says. “For comparison, if you kept the snow clean and increased air temperatures by 2 to 4 degrees Celsius (4 to 7 degrees Fahrenheit), the snow cover would be shortened by just 5 to 18 days.”

“Here’s another way of thinking about this: if you want to get the same amount of sunlight absorbed by the clean snowpack, you would have to move that snow closer to the Sun than Venus.”

Dust reduces snow’s albedo—how much light it reflects back into space—causing a cascade of effects. “The enhanced absorption puts more heat into the water molecules in the snow,” Painter explains. Snow grains start to cluster together into bigger grains, and those grains have a larger surface area and volume for absorbing sunlight. Energy can penetrate deeper into the snowpack, and it has a longer and more torturous pathway to get back out. 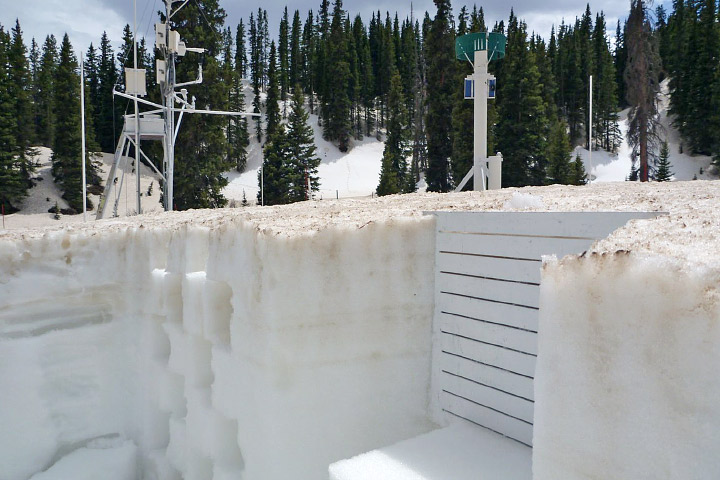 Scientists dig pits in the snow to study how layers of dust can affect how light travels through the snow. (Photograph ©2013 Jeff Deems, NSIDC.)

The effects quickly spread beyond one patch of snow. “By shortening the life of snow cover, you expose the soil and vegetation sooner,” Painter explains. Since soil and vegetation are darker than snow, they absorb more sunlight and reinforce the warming, melting, and evaporation. The exposed vegetation also starts growing sooner, making use of the liquid water and transpiring or “breathing” it back into the atmosphere.

In a study published in 2010, Painter and colleagues estimated that nearly 35 billion cubic feet of water were lost each year from the Colorado River basin through extended transpiration and evaporation. That’s enough water to supply Los Angeles for 18 months.

Snow cover is also important to glacier mass balance—the difference between how much snow and ice accumulates and how much melts. Pure, fresh snow isn’t just whiter and better at reflecting sunlight than water or dirt. Snow is whiter than ice, so it acts as a reflector and insulator on top of glaciers. More than 80 to 90 percent of the sunlight falling on fresh snow is reflected back into space, compared to 15 to 35 percent of the sunlight reflected by most ice.

“You have this very bright surface, much brighter than the glacier itself, and snow does not conduct heat well,” he says. “You can have a moist, high-temperature air mass flowing across the surface of a glacier, but because snow is such a great insulator, the ice has no idea whether it’s hot, cold, moist, or dry up there.”

“Increasing the dust load peels that insulation back earlier in the year,” Painter adds. “Once you peel the snow cover back, the energy can go into the glacier and start melting.”

The accumulated result is that the amount of water flowing into rivers, streams, and lakes decreases and becomes less predictable. The melt water that does run into the valleys and streams tends to flow faster and earlier in the spring (as much as three weeks earlier). Also, less snow is stored in the mountains for melting later in the summer and fall, when residual snowmelt can sustain water supplies through rain-starved times. “The compressed mountain runoff period makes water management more difficult than a slower runoff.”

Much of the dust that blows into snowy areas—whether in the Rocky Mountains, the Himalayas, or the Hindu Kush—comes from deserts. Humans can’t dictate the location of deserts, but human activity does influence the amount of dust that blows out of them.

Between 1800 and 1880, Americans were penetrating deeper into the interior of continental United States, particularly in the Plains, the Rockies, and the Southwest. Human settlement brought building, farming, and grazing cattle and sheep—all of which disturbed the ground surface. The effects were especially pronounced in arid places. 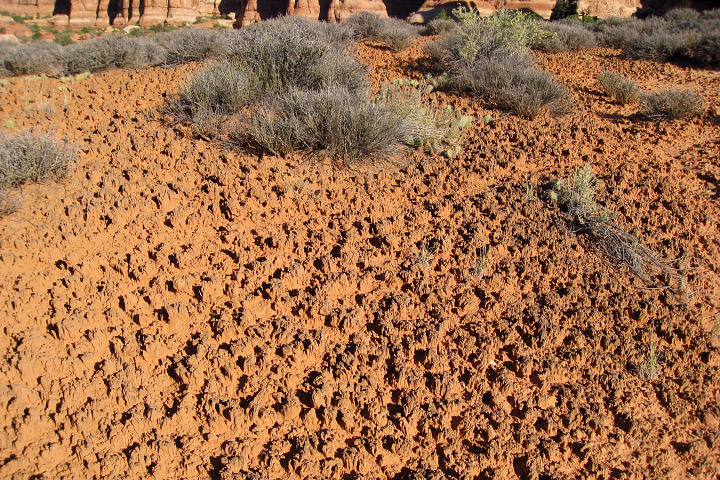 Undisturbed soils are covered by a protective layer that limits the production of dust, even in arid areas. (Photograph ©2010 J Brew.)

“Disturbance matters. Parts of deserts that have never been disturbed blow almost no dust because whatever loose material was there blew away a long time ago,” Painter notes. “Left behind were biological and physical crusts that prevent emission of the loose material that might lie below.” In fact, undisturbed dry places lose very little dust, even during decades-long droughts like those that occurred during the Medieval Warm Period.

Paleoclimate records suggest that there were several 30- to 50-year droughts in the American Southwest from 760 to 1250 AD, but dust emissions did not increase because desert pavements remained intact. Starting in the mid-19th century, significant cattle and sheep grazing began out West. It’s probably not an accident that snow cover began shrinking around the same time, though scientists still have not proven the connection.

Human activity has disturbed the deserts well beyond North America. The Himalayas get regular dustings from the Thar Desert along the India-Pakistan border, which witnessed an expansion of human activity in the 1800s. Further north, the Soviet Union diverted water from the Aral Sea, and now it’s a huge dust producer affecting the Tien Shan mountain range. Land practices over the past 30 years in Afghanistan have made that land a tremendous dust producer, as well. 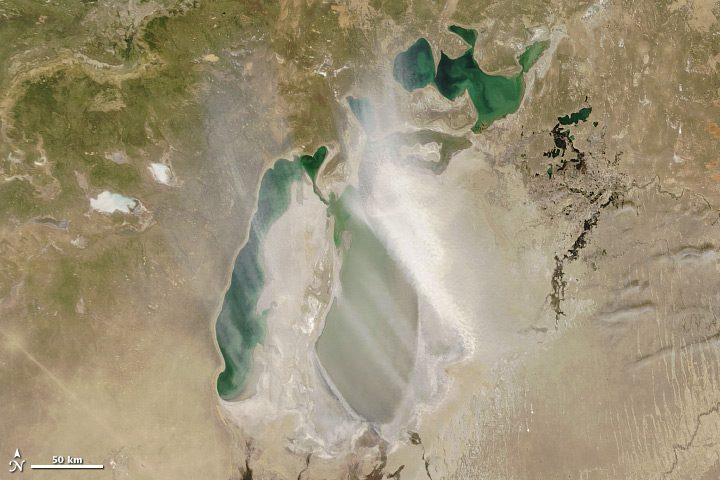 Dust deposition has even affected the Antarctic Peninsula. “There was a doubling of dust deposition there since 1935,” Painter adds, “and it coincided with when sheep were introduced to Patagonia.”

All over the world, human activity has kicked up dust and left the landscape more vulnerable to the effects of drought. It has also sent dust across oceans, to places far removed from the source. It makes Painter wonder: “What are we going to do if we have a 30- to 50-year drought now?”

Which Way Will the Dust Blow?

Much of Painter’s work has focused on how dust affects river runoff, particularly on the eastern half of the Colorado River Basin. It’s critical work because the river and its tributaries account for nearly 75 percent of the regional water supply. Water from the Colorado River irrigates almost 5.5 million acres (2.2 million hectares) of land, accounting for about 15 percent of U.S. food crops and 13 percent of U.S. livestock. Nearly 40 million people in seven states and northern Mexico depend on the river to quench their agricultural, industrial, and everyday thirsts.

“People in Denver, Phoenix, Los Angeles, San Diego, Las Vegas...they all have their straws in this river,” Painter says. “Forecasting runoff affects everything from reservoirs to water managers to U.S. relations with Mexico.” 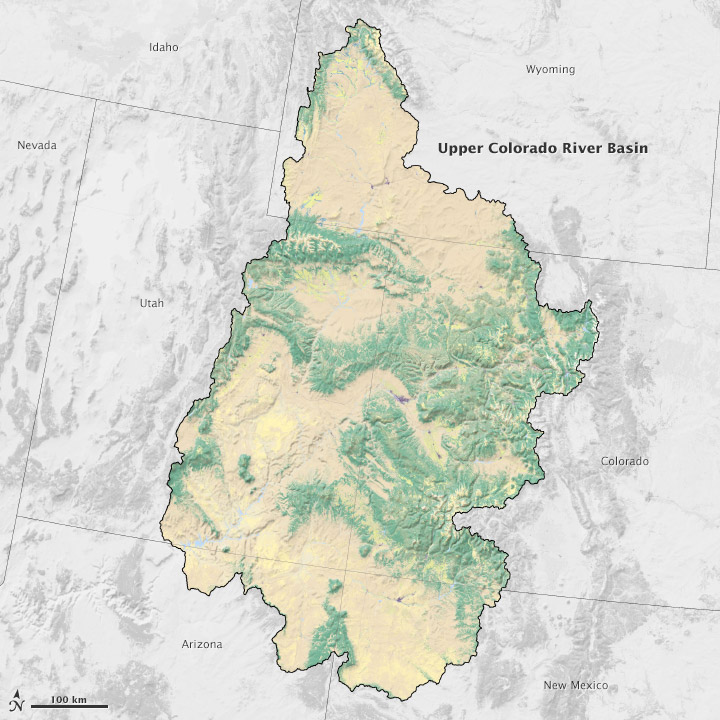 The dust and snowmelt problem has been growing for quite some time in the American Southwest. According to studies of sediments at the bottom of lakes in Colorado’s San Juan Mountains, airborne dust significantly increased in the mid-1800s as settlers stopped crossing the Plains and Rockies and started putting down roots. By 1890, airborne dust was about five to seven times greater than before American settlement.

“Even if dust disturbance stabilizes and there’s no ongoing trend, we may have gone into a new regime in which snowpack gets dirtier earlier and melts off sooner,” Painter says. In places like Colorado, that will mean a shortened ski season, and all the attendant economic consequences. For the tens of millions of people who rely on the Colorado River for water, supplies will drop. And the shrinking of Earth’s snowy white insulation will mean less sunlight is reflected back into space and more heat is retained near the surface.

Painter looks to history for hope. “In the 1930s, we had the Dust Bowl. It was a climatic event, but it was made worse by land-use practices in which the farmers were unwittingly abusing the land,” he says. “The story goes that when Congress was arguing over the Dust Bowl, one of these big storms deposited a centimeter of dust on the steps of the U.S. Capitol. That was what was needed to convince them, and they took action.”

The Taylor Grazing Act of 1934 changed how public lands could be used for livestock. Studies of lake sediments have suggested that the amount of dust falling in the Rocky Mountains dropped by about one quarter after that.

“Those regions are far more stable today, and they don’t emit as much dust,” Painter notes. “When disturbed lands have been allowed to recover, there’s a drop in dust emission. So can something be done?”