Although more rain and snow are falling from storms, it’s more difficult to say how global warming will affect the formation of those storms in the first place. “This would be a much easier nut to crack if the effects of warming all pointed to more frequent, stronger storms,” says Harold Brooks, a meteorologist at NOAA’s National Severe Storms Laboratory. “Unfortunately, they don’t.”

Though thunderstorms are familiar and seemingly non-threatening, severe thunderstorms—with sustained winds above 93 kilometers (58 miles) per hour or with unusually large hail—can lead to supercells, derechos, and tornadoes. Several key ingredients are required for severe thunderstorms, starting with the presence of warm, moist air near the surface and a store of potential energy once that air begins to rise. Meteorologists call this combination “convective available potential energy,” or CAPE. The higher the CAPE, the more potential an air mass has to create the towering cumulus clouds that create storms. 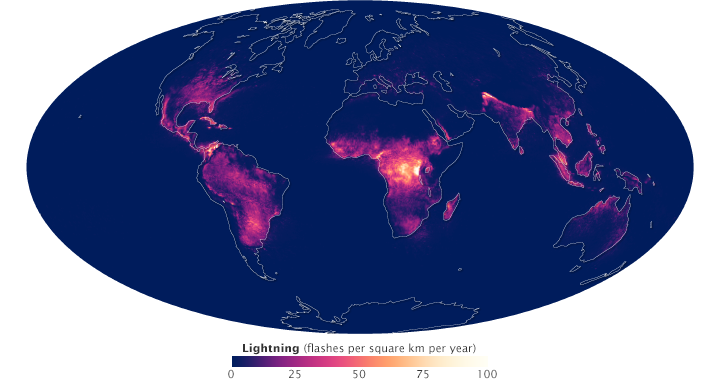 Lightning only occurs in areas with strong convection. This map of lightning strike frequency from May 1995 through 2011 shows where severe weather occurs around the world. Scientists are using computer models to predict if global warming will cause an increase in the number and strength of thunderstorms. (NASA image by Robert Simmon, using data from the MSFC Global Hydrology Resource Center.)

“CAPE can provide storms with the raw fuel to produce rain and hail,” says Brooks, “and vertical wind shear can pull and twist weak storms into strong, windy ones.”

Climate change should, theoretically, increase potential storm energy by warming the surface and putting more moisture in the air through evaporation, Brooks explained. But on the other hand, disproportionate warming in the Arctic should lead to less wind shear in the mid-latitude areas prone to severe thunderstorms, making the storms less likely.

In recent years, Del Genio conducted simulations to assess global warming’s impact on thunderstorms in the United States. Working with a climate model maintained by the Goddard Institute for Space Studies, he found that the number of severe storms would not change much, but the strongest storms would have even stronger and more destructive winds. 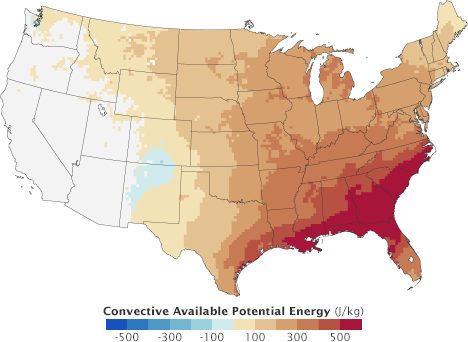 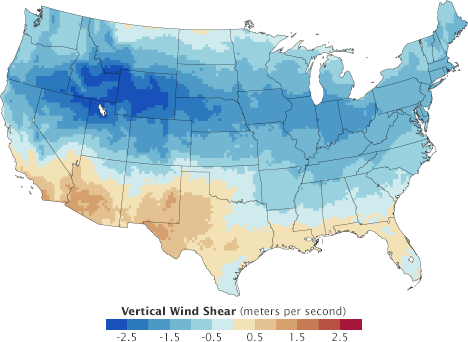 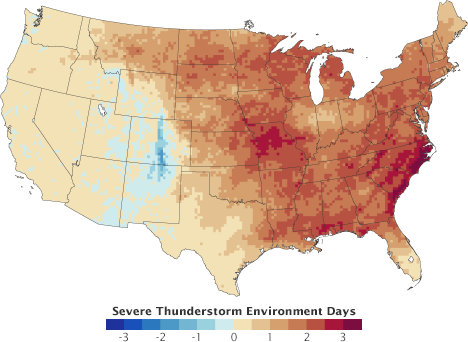 Detailed climate models of the United States are helping scientists determine the effect of future climate change on storms. These maps show the results of one model comparing the summer climate in 2072–2099 with the climate in 1962–1989. Convective available potential energy is predicted to rise enough to overwhelm a slight decrease in vertical wind shear, leading to an increase in severe thunderstorms, especially in Missouri and coastal North and South Carolina. (Images adapted from Trapp et al., 2007.)

However, both scientists caution that there’s uncertainty in their findings because of the meager scientific attention thunderstorms have received. Unlike tropical cyclones, which climate researchers have studied intensely since Hurricane Katrina struck New Orleans in 2005, only a handful of researchers have focused on the impact of global warming on severe thunderstorms.

But again, there are competing forces. At higher altitudes in the upper troposphere—above 5 kilometers (3 miles) —the air is warming more quickly at the equator than at the poles. Since upper troposphere temperatures and winds are key to the formation of extra-tropical cyclones, changes at that level could counteract changes lower in the atmosphere.