Effects of the Temperature See-Saw

If understanding the impact of global warming on storms were simply a matter of tallying up extra moisture, the answer would be pretty straightforward. However, reality is more complicated. Putting extra water vapor into the atmosphere is just one of the ways global warming is changing the planet. Another important factor is how the heat in the atmosphere is distributed.

Since the mid Twentieth Century, average global temperatures have warmed about 0.6°C (1.1°F), but the warming has not occurred equally everywhere. Temperatures have increased about twice as fast in the Arctic as in the mid-latitudes. The loss of sea ice is a key reason why. Bright and reflective ice is giving way to darker, open ocean—amplifying the warming trend by absorbing more heat from the Sun. On the other hand, the abundance of convection and thunderstorms in the tropics contributes to a slower rate of warming by transporting heat away from the surface. 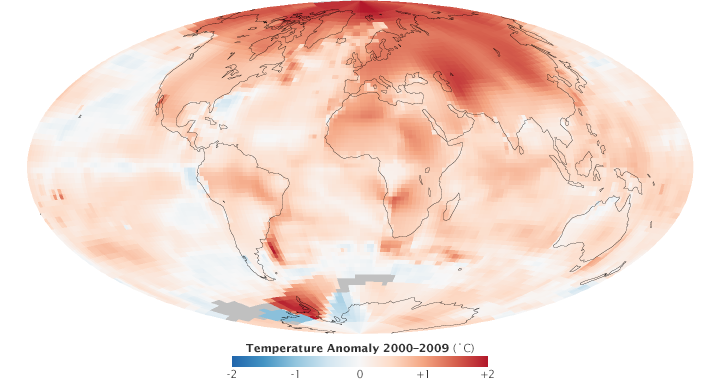 Global temperatures from 2000–2009 were on average about 0.6°C higher than they were from 1951–1980. The Arctic, however, was about 2°C warmer. (NASA image by Robert Simmon, with GISS Surface Temperature Analysis (GISTEMP) data.)

Climatologists think the differing rates of warming from the equator to the poles could have a significant impact on some types of storms. Extra-tropical cyclones, for example, harvest energy from the atmosphere when masses of warm and cold air interact along the polar front—the boundary between cooler polar air and warmer subtropical air. As the difference between the temperature at the poles and the tropics decreases, there could be less energy for these storms to absorb, a change that could weaken them or make them less frequent.

Temperatures are warming more near the poles than near the equator. This plot shows the change in temperature versus latitude from 1880 to 2012. The reduced temperature contrast between high latitudes and the tropics likely weakens extra tropical cyclones. (NASA image by Robert Simmon, with GISS Surface Temperature Analysis (GISTEMP) data.)

“Sorting out opposing factors is what makes this such a challenging problem,” Del Genio says. “And keep in mind that this is a simplification. These aren’t the only two factors involved.”

Wind shear—a measure of how the speed and direction of winds differ at different levels of the atmosphere—complicates the picture because it can affect storms in a variety of ways. Tropical cyclones require weak wind shear; in other words, they need minimal differences in wind speeds at adjacent levels of the atmosphere. Strong wind shear tears tropical cyclones apart, preventing heat and moisture from organizing into a storm core.

Research suggests that Atlantic wind shear could increase by 1 to 2 miles (1.6 to 3.2 kilometers) per hour for each degree that global temperatures increase. It’s this potential increase that explains why many climate simulators conclude that the number of tropical cyclones will stay the same or decrease even as the strongest storms get stronger. An article published in 2010 by a group of the world’s leading storm experts concluded that the average intensity of tropical cyclones will likely increase by 2 to 11 percent by 2100, but the overall frequency of storms will decrease between 6 and 34 percent. 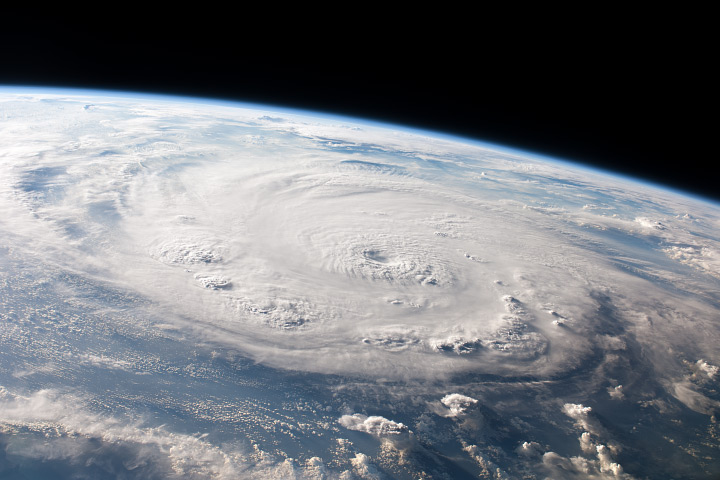 Hurricane Felix hovers over the Caribbean Sea, as viewed from the International Space Station on September 3, 2007. (Astronaut photograph ISS015-E-25054.)

Another complicating factor is that the same changes in equator-to-pole temperatures that could influence storm formation could also affect the winds that steer them. For instance, jet streams—meandering streams of fast-moving air that play a key role in steering storms—could speed up or slow down. A sluggish jet stream would mean slower-moving storms that could dump heavier loads of rain and snow, especially in coastal areas.

Preliminary research by Jennifer Francis of Rutgers University suggests that the jet stream’s west-to-east winds have slowed and grown wavier since 1979 because of the loss of Arctic sea ice. Francis has argued that the changes may have contributed to extreme weather events in recent years by creating large dips or kinks in the jet stream—what meteorologists call “blocking” patterns.

Blocking patterns are areas of persistently high pressure that often accompany extreme weather. It was a blocking high, for example, that led to long-lived downpours and devastating flooding in Pakistan in 2010. And it was a similar persistent blocking pattern that caused record melting in Greenland in the summer of 2012 and helped push Superstorm Sandy inland rather than out to sea.