Effects of Changing the Carbon Cycle

It is significant that so much carbon dioxide stays in the atmosphere because CO2 is the most important gas for controlling Earth’s temperature. Carbon dioxide, methane, and halocarbons are greenhouse gases that absorb a wide range of energy—including infrared energy (heat) emitted by the Earth—and then re-emit it. The re-emitted energy travels out in all directions, but some returns to Earth, where it heats the surface. Without greenhouse gases, Earth would be a frozen -18 degrees Celsius (0 degrees Fahrenheit). With too many greenhouse gases, Earth would be like Venus, where the greenhouse atmosphere keeps temperatures around 400 degrees Celsius (750 Fahrenheit).

Rising concentrations of carbon dioxide are warming the atmosphere. The increased temperature results in higher evaporation rates and a wetter atmosphere, which leads to a vicious cycle of further warming. (Photograph ©2011 Patrick Wilken.)

Because scientists know which wavelengths of energy each greenhouse gas absorbs, and the concentration of the gases in the atmosphere, they can calculate how much each gas contributes to warming the planet. Carbon dioxide causes about 20 percent of Earth’s greenhouse effect; water vapor accounts for about 50 percent; and clouds account for 25 percent. The rest is caused by small particles (aerosols) and minor greenhouse gases like methane.

Water vapor concentrations in the air are controlled by Earth’s temperature. Warmer temperatures evaporate more water from the oceans, expand air masses, and lead to higher humidity. Cooling causes water vapor to condense and fall out as rain, sleet, or snow.

Rising carbon dioxide concentrations are already causing the planet to heat up. At the same time that greenhouse gases have been increasing, average global temperatures have risen 0.8 degrees Celsius (1.4 degrees Fahrenheit) since 1880.

With the seasonal cycle removed, the atmospheric carbon dioxide concentration measured at Mauna Loa Volcano, Hawaii, shows a steady increase since 1957. At the same time global average temperatures are rising as a result of heat trapped by the additional CO2 and increased water vapor concentration. (Graphs by Robert Simmon, using CO2 data from the NOAA Earth System Research Laboratory and temperature data from the Goddard Institute for Space Studies.)

This rise in temperature isn’t all the warming we will see based on current carbon dioxide concentrations. Greenhouse warming doesn’t happen right away because the ocean soaks up heat. This means that Earth’s temperature will increase at least another 0.6 degrees Celsius (1 degree Fahrenheit) because of carbon dioxide already in the atmosphere. The degree to which temperatures go up beyond that depends in part on how much more carbon humans release into the atmosphere in the future.

About 30 percent of the carbon dioxide that people have put into the atmosphere has diffused into the ocean through the direct chemical exchange. Dissolving carbon dioxide in the ocean creates carbonic acid, which increases the acidity of the water. Or rather, a slightly alkaline ocean becomes a little less alkaline. Since 1750, the pH of the ocean’s surface has dropped by 0.1, a 30 percent change in acidity.

Some of the excess CO2 emitted by human activity dissolves in the ocean, becoming carbonic acid. Increases in carbon dioxide are not only leading to warmer oceans, but also to more acidic oceans. (Photograph ©2010 Way Out West News.)

Ocean acidification affects marine organisms in two ways. First, carbonic acid reacts with carbonate ions in the water to form bicarbonate. However, those same carbonate ions are what shell-building animals like coral need to create calcium carbonate shells. With less carbonate available, the animals need to expend more energy to build their shells. As a result, the shells end up being thinner and more fragile.

Warmer oceans—a product of the greenhouse effect—could also decrease the abundance of phytoplankton, which grow better in cool, nutrient-rich waters. This could limit the ocean’s ability to take carbon from the atmosphere through the fast carbon cycle.

Plants on land have taken up approximately 25 percent of the carbon dioxide that humans have put into the atmosphere. The amount of carbon that plants take up varies greatly from year to year, but in general, the world’s plants have increased the amount of carbon dioxide they absorb since 1960. Only some of this increase occurred as a direct result of fossil fuel emissions.

Plants also need water, sunlight, and nutrients, especially nitrogen. If a plant doesn’t have one of these things, it won’t grow regardless of how abundant the other necessities are. There is a limit to how much carbon plants can take out of the atmosphere, and that limit varies from region to region. So far, it appears that carbon dioxide fertilization increases plant growth until the plant reaches a limit in the amount of water or nitrogen available.

Some of the changes in carbon absorption are the result of land use decisions. Agriculture has become much more intensive, so we can grow more food on less land. In high and mid-latitudes, abandoned farmland is reverting to forest, and these forests store much more carbon, both in wood and soil, than crops would. In many places, we prevent plant carbon from entering the atmosphere by extinguishing wildfires. This allows woody material (which stores carbon) to build up. All of these land use decisions are helping plants absorb human-released carbon in the Northern Hemisphere. 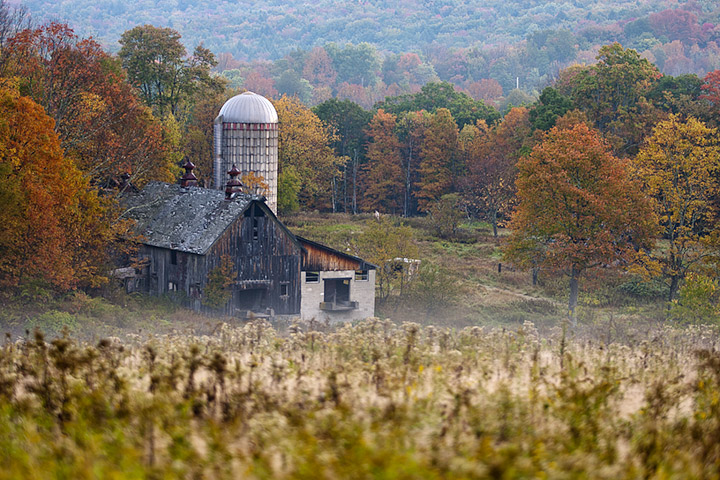 Changes in land cover—forests converted to fields and fields converted to forests—have a corresponding effect on the carbon cycle. In some Northern Hemisphere countries, many farms were abandoned in the early 20th century and the land reverted to forest. As a result, carbon was drawn out of the atmosphere and stored in trees on land. (Photograph ©2007 Husein Kadribegic.)

In the tropics, however, forests are being removed, often through fire, and this releases carbon dioxide. As of 2008, deforestation accounted for about 12 percent of all human carbon dioxide emissions.

The biggest changes in the land carbon cycle are likely to come because of climate change. Carbon dioxide increases temperatures, extending the growing season and increasing humidity. Both factors have led to some additional plant growth. However, warmer temperatures also stress plants. With a longer, warmer growing season, plants need more water to survive. Scientists are already seeing evidence that plants in the Northern Hemisphere slow their growth in the summer because of warm temperatures and water shortages.

Dry, water-stressed plants are also more susceptible to fire and insects when growing seasons become longer. In the far north, where an increase in temperature has the greatest impact, the forests have already started to burn more, releasing carbon from the plants and the soil into the atmosphere. Tropical forests may also be extremely susceptible to drying. With less water, tropical trees slow their growth and take up less carbon, or die and release their stored carbon to the atmosphere.

The warming caused by rising greenhouse gases may also “bake” the soil, accelerating the rate at which carbon seeps out in some places. This is of particular concern in the far north, where frozen soil—permafrost—is thawing. Permafrost contains rich deposits of carbon from plant matter that has accumulated for thousands of years because the cold slows decay. When the soil warms, the organic matter decays and carbon—in the form of methane and carbon dioxide—seeps into the atmosphere.

Current research estimates that permafrost in the Northern Hemisphere holds 1,672 billion tons (Petagrams) of organic carbon. If just 10 percent of this permafrost were to thaw, it could release enough extra carbon dioxide to the atmosphere to raise temperatures an additional 0.7 degrees Celsius (1.3 degrees Fahrenheit) by 2100.