Changes in the Carbon Cycle

Left unperturbed, the fast and slow carbon cycles maintain a relatively steady concentration of carbon in the atmosphere, land, plants, and ocean. But when anything changes the amount of carbon in one reservoir, the effect ripples through the others.

In Earth’s past, the carbon cycle has changed in response to climate change. Variations in Earth’s orbit alter the amount of energy Earth receives from the Sun and leads to a cycle of ice ages and warm periods like Earth’s current climate. (See Milutin Milankovitch.) Ice ages developed when Northern Hemisphere summers cooled and ice built up on land, which in turn slowed the carbon cycle. Meanwhile, a number of factors including cooler temperatures and increased phytoplankton growth may have increased the amount of carbon the ocean took out of the atmosphere. The drop in atmospheric carbon caused additional cooling. Similarly, at the end of the last Ice Age, 10,000 years ago, carbon dioxide in the atmosphere rose dramatically as temperatures warmed.

Levels of carbon dioxide in the atmosphere have corresponded closely with temperature over the past 800,000 years. Although the temperature changes were touched off by variations in Earth’s orbit, the increased global temperatures released CO2 into the atmosphere, which in turn warmed the Earth. Antarctic ice-core data show the long-term correlation until about 1900. (Graphs by Robert Simmon, using data from Lüthi et al., 2008, and Jouzel et al., 2007.)

Shifts in Earth’s orbit are happening constantly, in predictable cycles. In about 30,000 years, Earth’s orbit will have changed enough to reduce sunlight in the Northern Hemisphere to the levels that led to the last ice age.

When we clear forests, we remove a dense growth of plants that had stored carbon in wood, stems, and leaves—biomass. By removing a forest, we eliminate plants that would otherwise take carbon out of the atmosphere as they grow. We tend to replace the dense growth with crops or pasture, which store less carbon. We also expose soil that vents carbon from decayed plant matter into the atmosphere. Humans are currently emitting just under a billion tons of carbon into the atmosphere per year through land use changes. 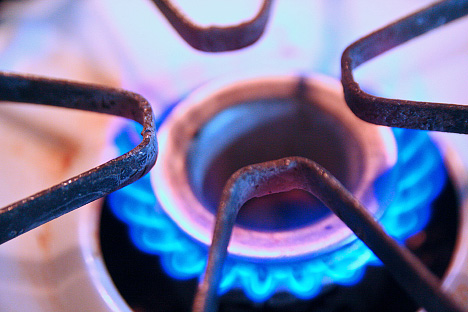 The burning of fossil fuels is the primary source of increased carbon dioxide in the atmosphere today. (Photograph ©2009 stevendepolo.)

Emissions of carbon dioxide by humanity (primarily from the burning of fossil fuels, with a contribution from cement production) have been growing steadily since the onset of the industrial revolution. About half of these emissions are removed by the fast carbon cycle each year, the rest remain in the atmosphere. (Graph by Robert Simmon, using data from the Carbon Dioxide Information Analysis Center and Global Carbon Project.)