Carbon plays an essential role in biology because of its ability to form many bonds—up to four per atom—in a seemingly endless variety of complex organic molecules. Many organic molecules contain carbon atoms that have formed strong bonds to other carbon atoms, combining into long chains and rings. Such carbon chains and rings are the basis of living cells. For instance, DNA is made of two intertwined molecules built around a carbon chain.

The bonds in the long carbon chains contain a lot of energy. When the chains break apart, the stored energy is released. This energy makes carbon molecules an excellent source of fuel for all living things. 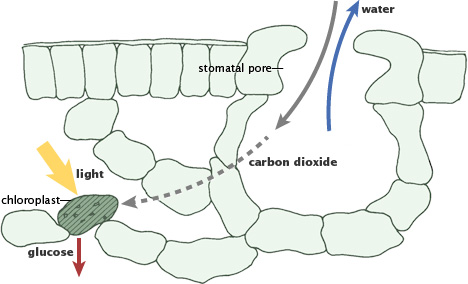 Plants and phytoplankton are the main components of the fast carbon cycle. Phytoplankton (microscopic organisms in the ocean) and plants take carbon dioxide from the atmosphere by absorbing it into their cells. Using energy from the Sun, both plants and plankton combine carbon dioxide (CO2) and water to form sugar (CH2O) and oxygen. The chemical reaction looks like this:

Four things can happen to move carbon from a plant and return it to the atmosphere, but all involve the same chemical reaction. Plants break down the sugar to get the energy they need to grow. Animals (including people) eat the plants or plankton, and break down the plant sugar to get energy. Plants and plankton die and decay (are eaten by bacteria) at the end of the growing season. Or fire consumes plants. In each case, oxygen combines with sugar to release water, carbon dioxide, and energy. The basic chemical reaction looks like this: 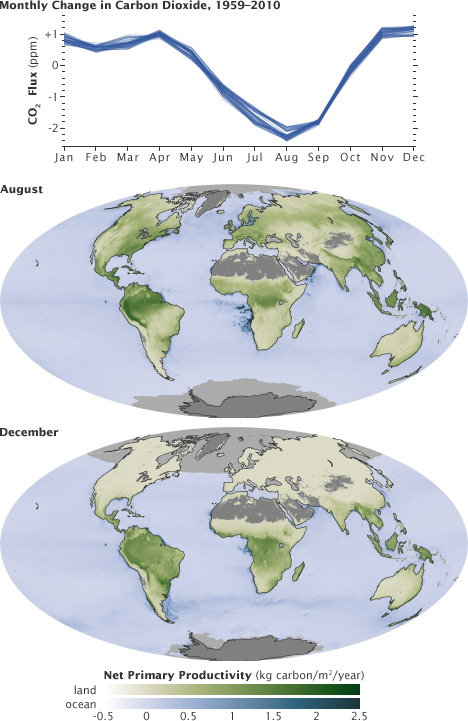 The ebb and flow of the fast carbon cycle is visible in the changing seasons. As the large land masses of Northern Hemisphere green in the spring and summer, they draw carbon out of the atmosphere. This graph shows the difference in carbon dioxide levels from the previous month, with the long-term trend removed.

These maps show net primary productivity (the amount of carbon consumed by plants) on land (green) and in the oceans (blue) during August and December, 2010. In August, the green areas of North America, Europe, and Asia represent plants using carbon from the atmosphere to grow. In December, net primary productivity at high latitudes is negative, which outweighs the seasonal increase in vegetation in the southern hemisphere. As a result, the amount of carbon dioxide in the atmosphere increases.