The movement of carbon from the atmosphere to the lithosphere (rocks) begins with rain. Atmospheric carbon combines with water to form a weak acid—carbonic acid—that falls to the surface in rain. The acid dissolves rocks—a process called chemical weathering—and releases calcium, magnesium, potassium, or sodium ions. Rivers carry the ions to the ocean. 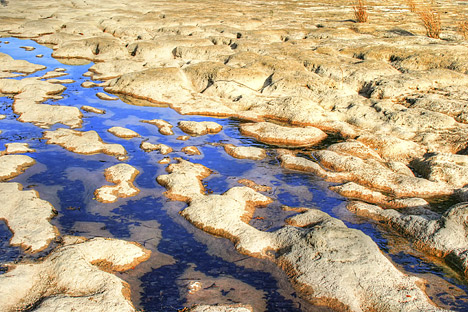 Rivers carry calcium ions—the result of chemical weathering of rocks—into the ocean, where they react with carbonate dissolved in the water. The product of that reaction, calcium carbonate, is then deposited onto the ocean floor, where it becomes limestone. (Photograph ©2009 Greg Carley.)

In the ocean, the calcium ions combine with bicarbonate ions to form calcium carbonate, the active ingredient in antacids and the chalky white substance that dries on your faucet if you live in an area with hard water. In the modern ocean, most of the calcium carbonate is made by shell-building (calcifying) organisms (such as corals) and plankton (like coccolithophores and foraminifera). After the organisms die, they sink to the seafloor. Over time, layers of shells and sediment are cemented together and turn to rock, storing the carbon in stone—limestone and its derivatives. 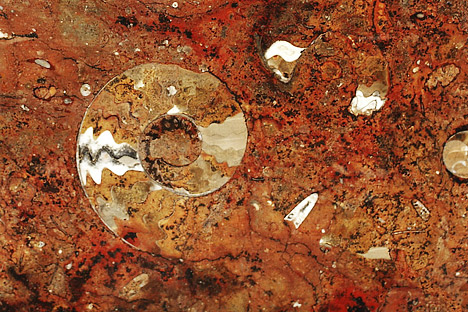 Limestone, or its metamorphic cousin, marble, is rock made primarily of calcium carbonate. These rock types are often formed from the bodies of marine plants and animals, and their shells and skeletons can be preserved as fossils. Carbon locked up in limestone can be stored for millions—or even hundreds of millions—of years. (Photograph ©2008 Rookuzz (Hmm).)

Only 80 percent of carbon-containing rock is currently made this way. The remaining 20 percent contain carbon from living things (organic carbon) that have been embedded in layers of mud. Heat and pressure compress the mud and carbon over millions of years, forming sedimentary rock such as shale. In special cases, when dead plant matter builds up faster than it can decay, layers of organic carbon become oil, coal, or natural gas instead of sedimentary rock like shale. 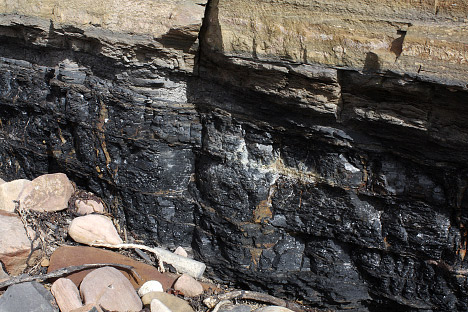 This coal seam in Scotland was originally a layer of sediment, rich in organic carbon. The sedimentary layer was eventually buried deep underground, and the heat and pressure transformed it into coal. Coal and other fossil fuels are a convenient source of energy, but when they are burned, the stored carbon is released into the atmosphere. This alters the balance of the carbon cycle, and is changing Earth’s climate. (Photograph ©2010 Sandchem.)

The slow cycle returns carbon to the atmosphere through volcanoes. Earth’s land and ocean surfaces sit on several moving crustal plates. When the plates collide, one sinks beneath the other, and the rock it carries melts under the extreme heat and pressure. The heated rock recombines into silicate minerals, releasing carbon dioxide.

Chemistry regulates this dance between ocean, land, and atmosphere. If carbon dioxide rises in the atmosphere because of an increase in volcanic activity, for example, temperatures rise, leading to more rain, which dissolves more rock, creating more ions that will eventually deposit more carbon on the ocean floor. It takes a few hundred thousand years to rebalance the slow carbon cycle through chemical weathering. 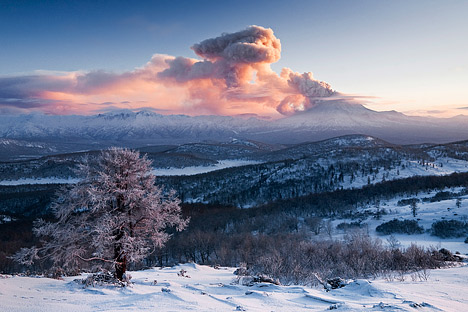 Carbon stored in rocks is naturally returned to the atmosphere by volcanoes. In this photograph, Russia’s Kizimen Volcano vents ash and volcanic gases in January 2011. Kizimen is located on the Kamchatka Peninsula, where the Pacific Plate is subducting beneath Asia. (Photograph ©2011 Artyom Bezotechestvo/Photo Kamchatka.)

However, the slow carbon cycle also contains a slightly faster component: the ocean. At the surface, where air meets water, carbon dioxide gas dissolves in and ventilates out of the ocean in a steady exchange with the atmosphere. Once in the ocean, carbon dioxide gas reacts with water molecules to release hydrogen, making the ocean more acidic. The hydrogen reacts with carbonate from rock weathering to produce bicarbonate ions.

Before the industrial age, the ocean vented carbon dioxide to the atmosphere in balance with the carbon the ocean received during rock weathering. However, since carbon concentrations in the atmosphere have increased, the ocean now takes more carbon from the atmosphere than it releases. Over millennia, the ocean will absorb up to 85 percent of the extra carbon people have put into the atmosphere by burning fossil fuels, but the process is slow because it is tied to the movement of water from the ocean’s surface to its depths.

In the meantime, winds, currents, and temperature control the rate at which the ocean takes carbon dioxide from the atmosphere. (See The Ocean’s Carbon Balance on the Earth Observatory.) It is likely that changes in ocean temperatures and currents helped remove carbon from and then restore carbon to the atmosphere over the few thousand years in which the ice ages began and ended.