Cleaning Up the Air

Extreme pollution outbreaks in the United States and Europe did much to put air pollution on national agendas. Satellites and astronauts accelerated the process by providing the raw imagery that helped inspire the environmental movement. As early as 1968, Stewart Brand published an image of Earth’s fully illuminated disk from Applications Technology Satellite 3 on the cover of Whole Earth Catalogue. In 1972, an Apollo 17 crewmember captured a similar shot en route to the moon. Known popularly as the Blue Marble, the photograph is perhaps the most reproduced image in human history and a global symbol of Earth’s fragility. 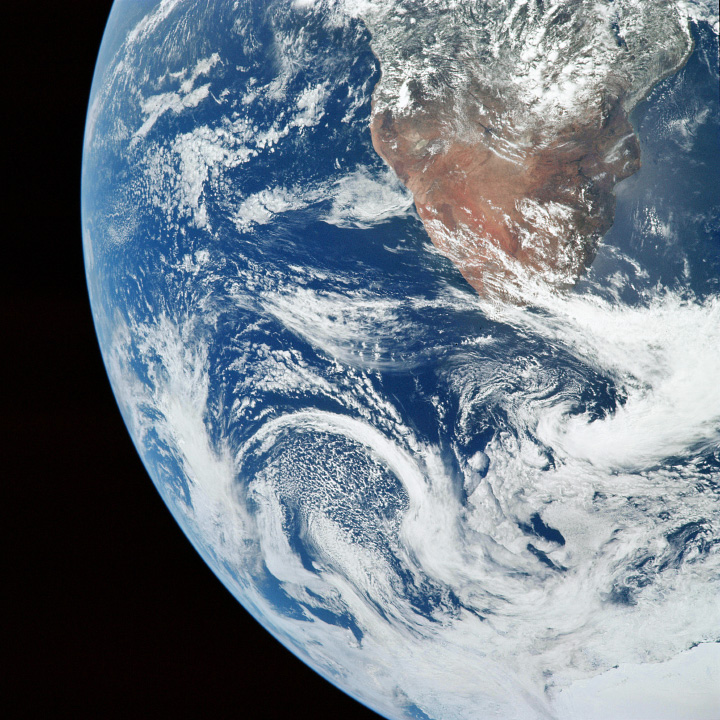 While commuting to and from the Moon, astronauts had an unprecedented view of Earth. On the way they collected a series of photographs showing an isolated Blue Marble against a backdrop of empty space. (NASA astronaut photograph AS17-148-22721.)

It all contributed to a concerted effort at local and national levels to clean up the air in the 1960s and 1970s. Coal, gasoline, and other fuels were treated or reformulated to reduce the quantity of harmful particles and gases they released. Vehicles started coming off the assembly line with catalytic converters. Regulators set limits on how often farmers could light open-air fires, and dirty cook stoves and wood stoves were replaced with cleaner-burning versions. Less-polluting fuels—such as natural gas, water, wind, and nuclear—began to take some of the load off of coal and oil-fired power plants. And those fossil-fuel power plants and factories started installing scrubbers and other emissions-filtering technologies.

While much of the work happened at the state and municipal level, efforts to clean up America’s air culminated in the 1970s with the passage of the Clean Air Act, a law that steered the United States toward better air by setting national standards for a series of key pollutants. The efforts paid off. The air over the United States today is far cleaner than three decades ago.

Clean air regulations in the United States have reduced the levels of 5 key pollutants since 1980. Measurements from 89 sites across the United States show the decline of carbon monoxide, lead, nitrogen dioxide, ground-level ozone, and sulfur dioxide in the atmosphere from 1980 through 2012. (Graph based on data from the Environmental Protection Agency.)

A network of ground-based air pollution sensors, operated by state and federal agencies, has measured decreases of more than 50 percent for five of the six key air pollutants regulated by the Environmental Protection Agency. Levels of lead, a heavy metal that can lead to serious neurological problems, dropped 91 percent between 1980 and 2012, mainly because of the shift to unleaded gasoline. The widespread adoption of catalytic converters led to a similarly drastic reduction in carbon monoxide (83 percent). Sulfur dioxide, which inflames lungs, has declined by 78 percent, mainly due to the installation of scrubbers on coal-fired power plants. Levels of nitrogen dioxide, a reddish-brownish gas that causes respiratory problems, fell 60 percent.

“What’s really remarkable is that the U.S. saw all of these improvements even while the population, the number of miles driven, and overall energy consumption rose,” said Duncan. “It’s an incredible achievement.”