There is hope—and precedent—in today’s relatively clear skies over Europe and North America. Astronauts and satellite instruments (such as the Moderate Resolution Imaging Spectrometer (MODIS)) still occasionally see haze over the United States when pollution levels are high, but it’s rare for it to become so concentrated that the landscape below disappears. This hasn’t always been the case.

Astronaut photographs from the 1960s and 1970s contain images of thick haze blanketing the Los Angeles and San Joaquin valleys, the eastern United States, and Europe’s Po Valley. “If astronauts and satellites had had access to space prior to the 1960s, they would have seen thick smoke and haze blanketing the cities in the northeastern and midwestern U.S., particularly in the winter,” said Rudolf Husar, a Washington University atmospheric scientist who has been studying air pollution for more than forty years. 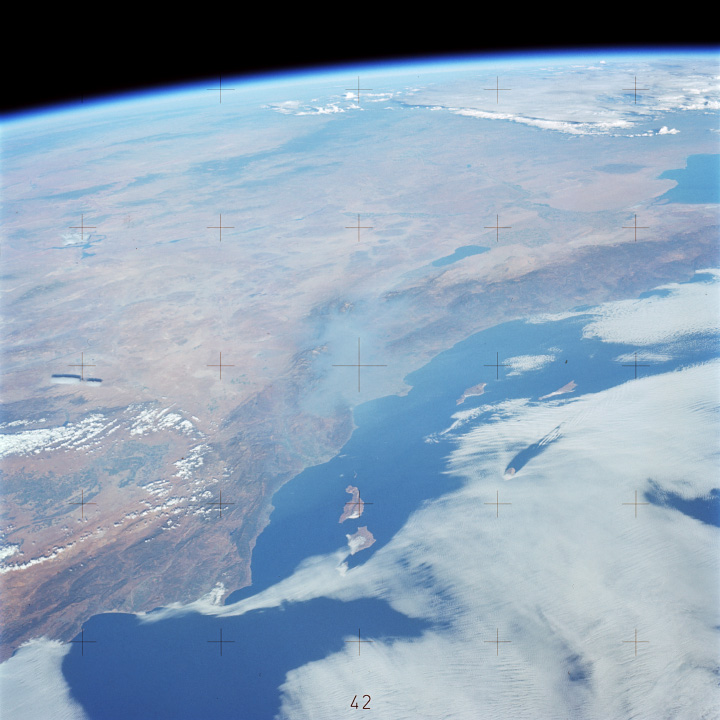 During the first half of the twentieth century, coal burning at power plants, factories, and homes filled the air over the midwestern U.S. with pollution. “Smoke,” as air pollution was usually called, used to block so much sunlight that people were occasionally forced to carry lamps in the middle of the day. In some eastern cities, particulate levels likely exceeded 1,000 micrograms per cubic meter—about twice as high as they are on a bad air quality day in modern Beijing, now one of the most polluted cities in the world.

The problem was especially bad in Pittsburgh. The hills surrounding the city were filled with bitumen, a type of soft coal that released large quantities of sulfate-producing gases, soot, and other pollutants when burned. In 1866, an Atlantic Monthly writer visited Pittsburgh and reported: “The town lies low, as at the bottom of an excavation, just visible through the mingled smoke and mist, and every object in it is black. Smoke, smoke, smoke—everywhere smoke.” It was, he wrote, “like looking over into hell with the lid taken off.” 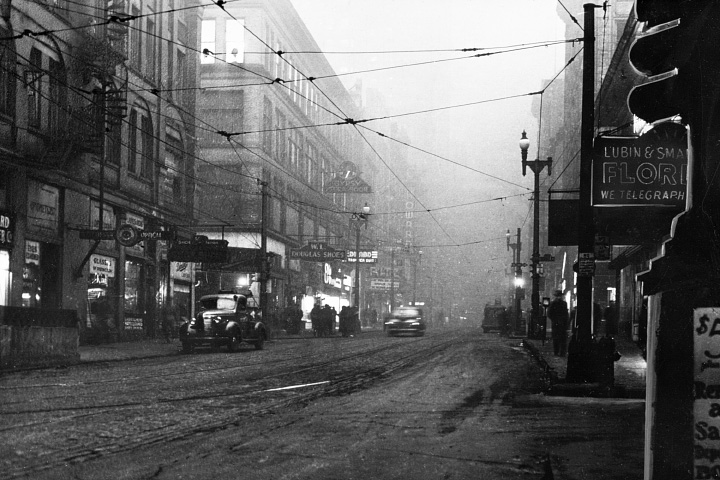 Pittsburgh’s air was often severely polluted in the mid-20th Century. A combination of the local meteorology and geography trapped smoke from the abundant steel mills in the downtown streets. (Photograph © Smoke Control Lantern Slide Collection, ca. 1940-1950, University of Pittsburgh.)

In October 1948, a disastrous outbreak of air pollution occurred in nearby Donora, Pennsylvania. What meteorologists call a temperature inversion—warmer air moving above cooler air—triggered the crisis. The warm air functioned like a lid, trapping fumes from steel and zinc smelters and exposing the town’s 13,000 residents to extremely high levels of sulfate pollution. The inversion lasted just four days, but the health consequences were swift: twenty people died and 6,000 suffered serious respiratory problems. Something similar happened in London in December 1952, leading to thousands of respiratory problems and premature deaths.

Across North America, another kind of air pollution began to plague Los Angeles, a city that burned almost no coal. Southern California was supposed to be a place of endless sunshine, but on many days a throat-burning, eye-stinging veil of smog reigned. The first severe outbreak occurred in 1943, and it baffled scientists. It had a bleach-like odor reminiscent of a chemistry lab. Plants turned yellow, wilted, and died. Strange cracking patterns appeared on tires. Headlines in The Los Angeles Times referenced a possible “gas attack” by the Japanese. 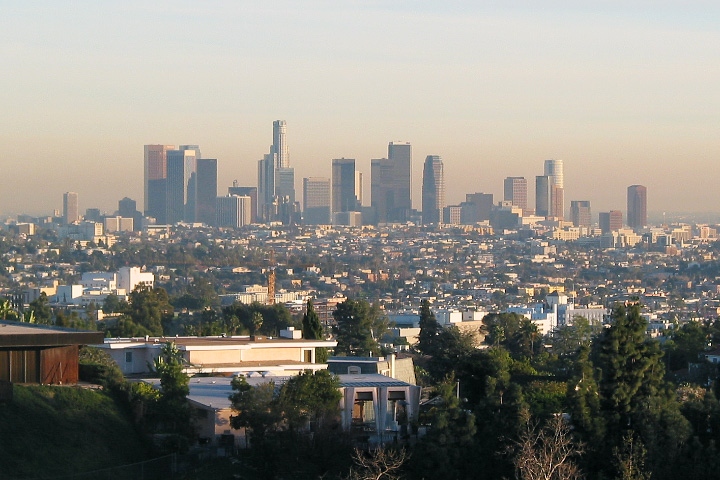 By 2005, air quality in Los Angeles had improved from its 1970s nadir, but smog was often visible over the downtown skyline. (Photograph cc by 2.0 cdschock).

Dutch chemist Arie Haagen-Smit, known as the “father” of air quality science, finally pinpointed the source of the smog in 1950. Through laboratory experiments, he proved that the main culprit was a stew of gases coming from vehicle tailpipes. Cars and trucks were emitting volatile organic compounds and nitrogen oxides that reacted with sunlight to produce a transparent gas called ozone, the main ingredient in smog. The stew of emissions also increased levels of nitrogen dioxide, the only gaseous pollutant visible to the naked eye. The skies turned yellow-brown during extreme outbreaks of photochemical smog.