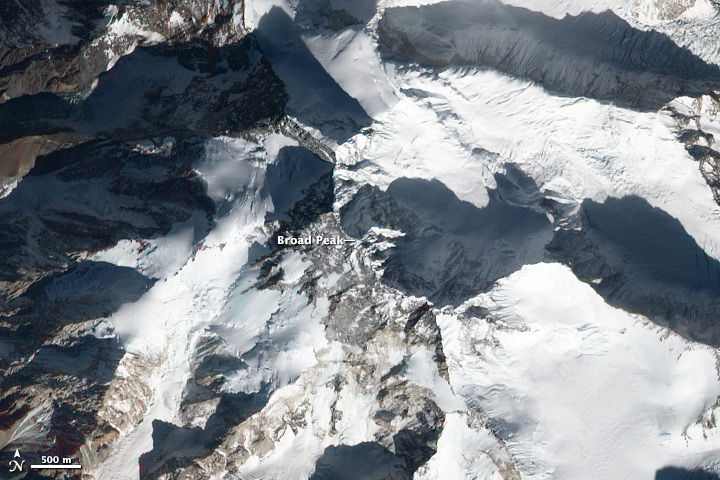 Located on the border of Pakistan and China, just a few kilometers southeast of K2, Broad Peak is the twelfth tallest mountain on Earth and the third tallest in the Karakoram Range. Its name comes from its unusually long summit ridge, which extends for about 2 kilometers. There is a snow-filled, saddle-shaped low point—or col—that separates the main summit from another high point to the north known as the central summit, which is just 31 meters (102 feet) shorter (8,016 meters versus 8,047 meters).

There is some discussion within the climbing community about whether the central summit deserves recognition as the 15th eight-thousander. Peaks in the Karakoram are only considered independent mountains if at least 500 meters of topographic prominence separates them from neighboring high points. If not, they are considered subsidiary peaks. While Broad Peak’s central summit doesn’t have enough prominence to be considered its own mountain, geographers think this could change in the future if the snow and ice that has collected in the col retreats enough.

An Austrian team was the first to climb Broad Peak, following a route up the southwest face in 1957. The team took no bottled oxygen and carried all of their own equipment rather than relying on porters. There had been a total of 404 successful ascents of Broad Peak as of March 2012, while 21 climbers had died trying—a fatality rate of about 5 percent.