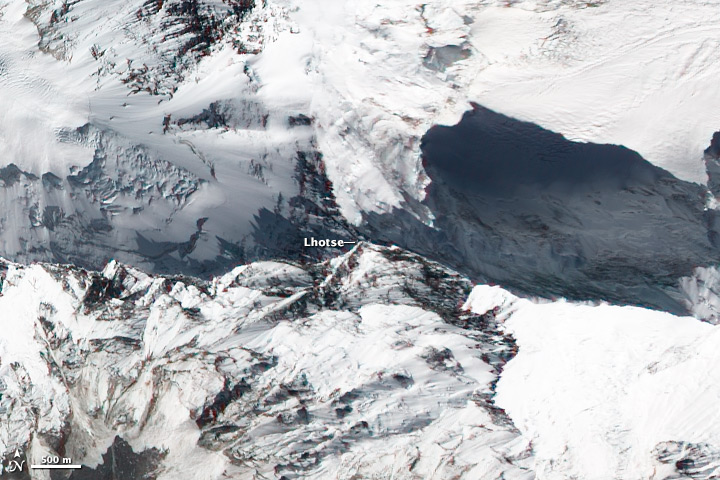 Despite being the fourth tallest mountain in the world, Lhotse is often overshadowed by its taller neighbor Mount Everest, which lies just a few kilometers to the north. The two peaks are linked by the South Col, a vertical ridge that never drops below 8,000 meters.

Lhotse is 610 meters (2,000 feet) above the lowest point on the South Col—just enough for it to be considered an independent mountain. If Lhotse’s topographic prominence were less than 500 meters, it would be considered a subsidiary peak of Everest.

Still, climbers often clump the two together. Lhotse is sometimes called Everest’s South Peak. A Swiss team made the first ascent of Lhotse in 1956, tackling the mountain on the same expedition that they logged the second-ever ascent of Everest. They followed a route from the South Col up Lhotse’s west face.

Far more challenging than getting to the summit of Lhotse is arriving via the south face. This requires ascending a 3,300-meter (11,000 foot) wall of rock that is vertical at times. It wasn’t until 1990 that climbers ascended the south face successfully, a feat accomplished by a team from the former Soviet Union. A year before, Jerzy Kukuczka, the second person to climb all of the eight-thousanders, died trying to find a route up Lhotse’s south face.

There had been a 461 successful ascents of Lhotse as of March 2012, while just 13 climbers died trying—a fatality rate of about 3 percent.