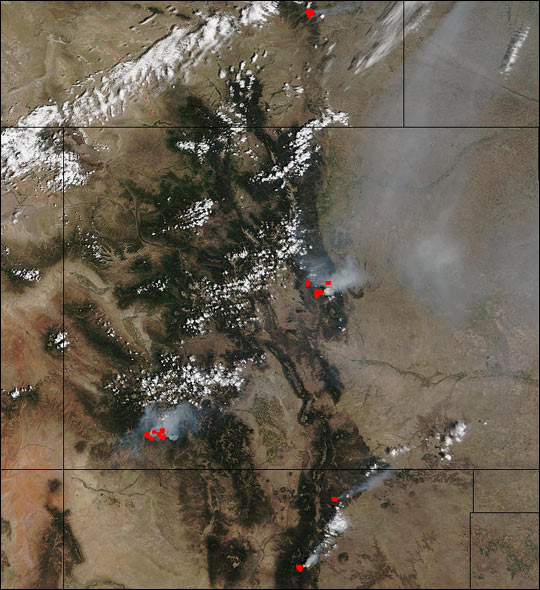 Another 2,000 people have been evacuated from their homes less than 50 miles southwest of Denver, Colorado, bringing the total to more than 7,900. Although rain fell on Tuesday, June 18 and slowed the progress of the Hayman Fire (red dots to the right of center) somewhat, it was short lived. On Wednesday, the fire made significant advances on the eastern flank. More rain is forecast for Thursday. The fire was 136,000 acres on Thursday, June 20.

Meanwhile, more than 1,700 people are evacuated from their homes north of Durango as the Missionary Ridge Fire in southwest Colorado continued to grow to more than 55,000 acres. At least forty structures have already been lost in this fire, which is only 25 percent contained.

Additional fires are burning in the Medicine Bow Mountains in Wyoming (north), and in the Sangre de Cristo Mountains northeast of Santa Fe, New Mexico (south). This image from the Moderate Resolution Imaging Spectroradiometer (MODIS) on the Terra satellite was captured on June 19, 2002, and shows smoky skies over much of eastern Colorado.