The Northwest is Running Hot and Dry 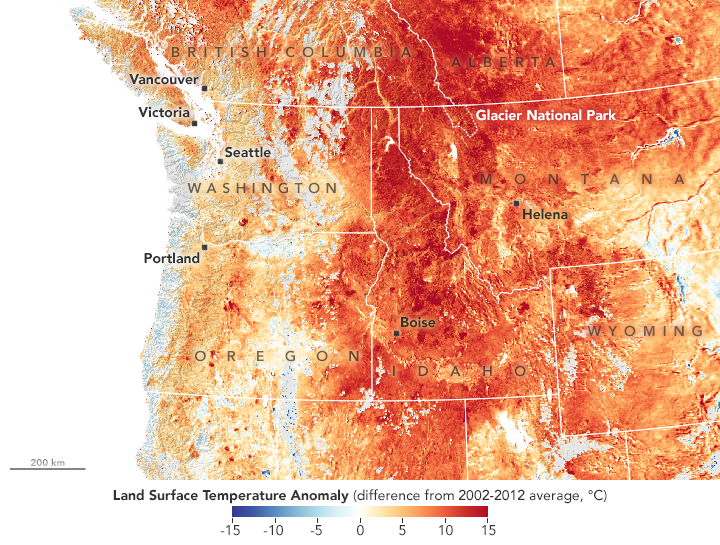 In August 2018, temperature records have fallen across the northwestern United States. On August 11, West Glacier, Montana, recorded its hottest air temperature on record—38 degrees Celsius or 100 degrees Fahrenheit—as did Pierce, Idaho (41°C or 105°F). Seattle and Portland have seen scores of days this summer with temperatures above 90°F.

The region’s widespread warmth is clear in this temperature anomaly map, which is based on data from the Moderate Resolution Imaging Spectroradiometer (MODIS) on NASA’s Aqua satellite. It shows land surface temperatures (LSTs) for August 10, 2018, compared to the 2002-2012 average for August 5-15. Shades of red depict areas that were hotter than average; blues were cooler than average. White pixels were normal, and gray pixels did not have enough data, most likely due to excessive cloud cover.

Note that this map represents land surface temperatures (LSTs), not air temperatures. LSTs reflect how hot the surface of the Earth would feel to the touch in a particular location. They can sometimes be significantly hotter or cooler than air temperatures.

The heat, combined with dry conditions, contributed to fire activity in several states. For example, the rapid spread of the Howe Ridge fire in Montana’s Glacier National Park led to closures and evacuations. 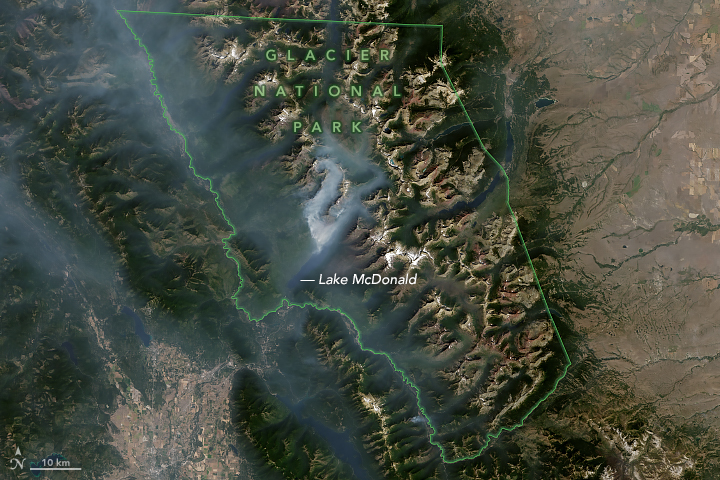 On August 15, the Operational Land Imager (OLI) on Landsat 8 passed over Glacier National Park and acquired the natural-color image above. Several fires are emitting plumes of smoke on the northwestern edge of Lake McDonald. The topography of the park caused the thickest smoke to be found at lower elevations, as the mountains block wind that would otherwise disperse it. A number of fires to the west have lofted large, wide-reaching plumes across the Western U.S. and Canada.

In August 2018, temperature records fell in the northwestern United States.