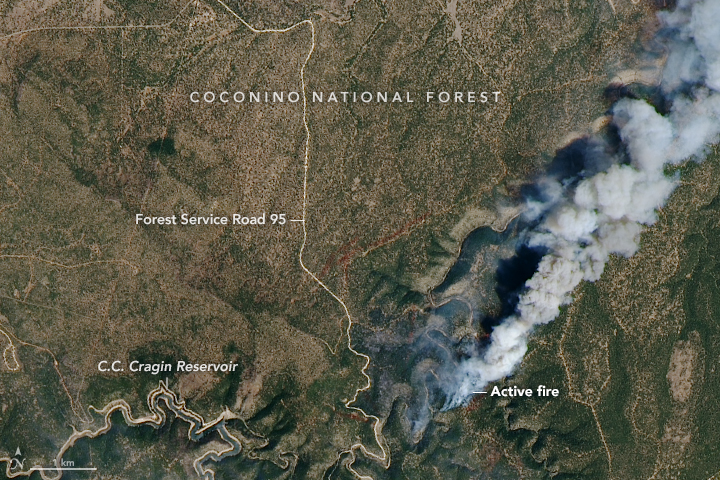 In April 2018, an abandoned campfire in Arizona grew into a fast-moving wildfire that charred more than 50 square kilometers (20 square miles) near the C.C. Cragin Reservoir in Coconino National Forest.

On April 29, 2018, the Operational Land Imager (OLI) on Landsat 8 acquired a natural-color image of the Tinder fire as smoke streamed northeast. Streaks of what appeared to be red flame retardant were visible around the perimeter of the fire; the flame retardant may have been dropped by one of several helicopters on the scene. The fire destroyed or severely damaged at least 41 homes and structures, according to the Arizona Daily Sun.

As the Terra satellite passed overhead at 11:15 a.m. on April 30, the Multi-angle Imaging SpectroRadiometer (MISR) sensor captured information about the height of the smoke plume. The top of the plume reached about 4 kilometers (2 miles), low enough that it probably remained within the planetary boundary layer—the part of the atmosphere closest to the surface, where the topography of the ground has a significant impact on winds.

Understanding how high wildfire smoke rises is one of the key pieces of information required to predict where and how far a smoke plume will spread in the atmosphere. When smoke is injected above the boundary layer and into the free troposphere, it spreads much farther.

“Most fires inject smoke into the near-surface planetary boundary layer,” explained Ralph Kahn, an atmospheric scientist at Goddard Space Flight Center and a member of the MISR science team. “In desert-like environments in the mid-afternoon, that can exceed 4 kilometers deep, but in most mid-latitude locations the boundary layer tends to be between 2 and 3 kilometers in the afternoon. It is lower at night because of surface heating and convection in the morning hours.”

Researchers and students involved with the MISR Plume Height Project have analyzed and posted data from nearly 30,000 wildfire plumes worldwide. This plume height databases, and another one from the Active Aerosol Plume-height Project, is useful for addressing long-range research questions about how wildfire smoke affects regional air quality and climate. They also can help air traffic controllers, meteorologists, and first responders dealing with the immediate hazards of smoke plumes.