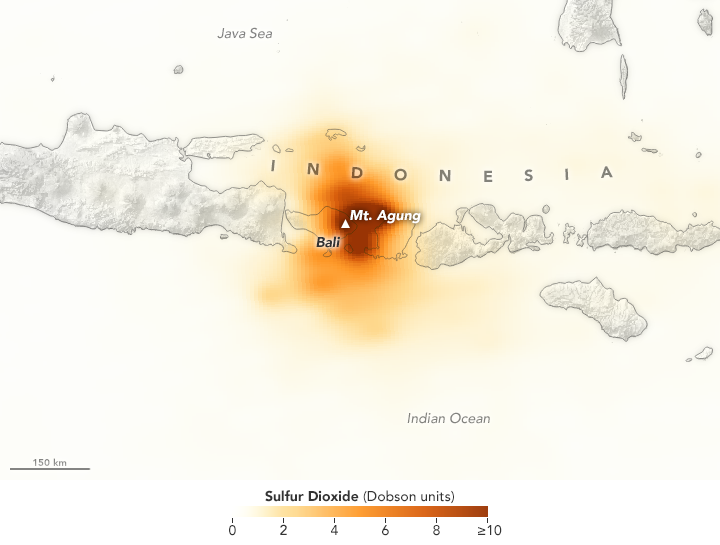 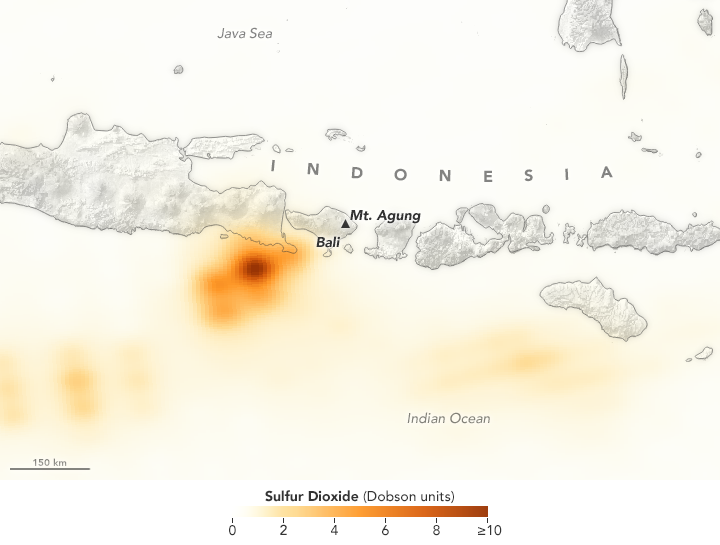 Since August 2017, residents of the Indonesian island of Bali have been living with a heightened sense of the uncertainty that comes with living near a volcano. Mount Agung has been rumbling with increasing unrest for more than three months. Activity ramped up with a small ash eruption on November 21, 2017, followed by an explosive phreatic eruption on November 25.

Clouds have so far prevented satellites from capturing visible images of the volcanic plume, but that does not mean the eruption has gone unobserved. Even on a cloudy day, some satellites excel at detecting components in the atmosphere that are invisible to human eyes, such as the sulfur dioxide (SO2) in a volcano’s plume. The gas can affect both human health and climate.

These maps show concentrations of SO2 detected over Mount Agung on November 27 (top) and November 28 (bottom) by the Ozone Mapper Profiler Suite (OMPS) on the Suomi National Polar-orbiting Partnership (Suomi-NPP) satellite. Turn on the image comparison tool to see changes in the SO2 plume’s magnitude and location.

Simon Carn, a volcanologist at Michigan Tech, noted that the westward motion of the plume is due to the pull of Tropical Cyclone Cempaka south of Java.

Also notice that by November 28, the SO2 plume directly over the volcano appears to have decreased. “It is definitely normal that it should fluctuate a bit,” said Janine Krippner, a volcanologist at the University of Pittsburgh. “But the volcano is definitely not winding down at this point.”

She also notes that the concern now is that there is a clear pathway through which lava can travel to the surface. An “open system” like this one led to deadly lava flows during the volcano’s last major eruption in 1963.

According to a report by the Jakarta Globe, about 100,000 people live on the volcano’s slopes but less than half have evacuated. The eruption has also led to airport closures and the cancelation of hundreds of flights.

Mount Agung has been rumbling with increasing unrest for more than three months.