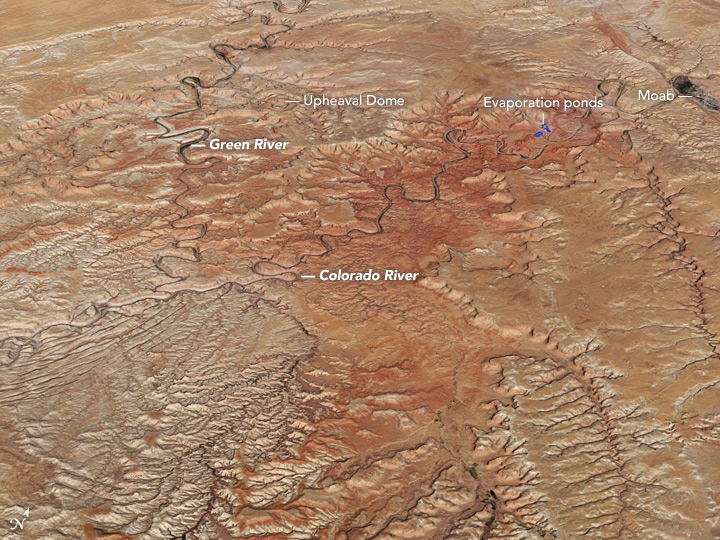 You won’t find record-high mountain terrain in Utah’s Canyonlands National Park. The highlights of this landscape tend to reach down into the Earth, rather than soaring above it.

The Operational Land Imager (OLI) on the Landsat 8 satellite acquired a natural-color image of the park on July 5, 2016. That image was draped over an ASTER-derived global digital elevation model to show the rise and fall of this landscape.

The land here has most recently been shaped by erosion, which formed the park’s famous winding canyons and towering pinnacles. Rivers have been a key source of that erosion, most notably from the Green and Colorado. The Green River flows south through Wyoming and makes a quick dip into Colorado before winding through myriad canyons in Utah. It joins the Colorado River near the middle of the park; that river ultimately empties into the Gulf of California. Hikers can get a good look at the river junction from a viewpoint at the aptly named “confluence overlook trail.”

Beyond river-carved canyons, you will find pillars of rock standing where the surrounding sandstone has been eroded by water. “The Needles” formation in the park’s southeast corner is a magnificent example of the phenomenon, though the individual pillars are too small to be seen in this image. The National Park Service photograph below shows a ground-based view of the structures. 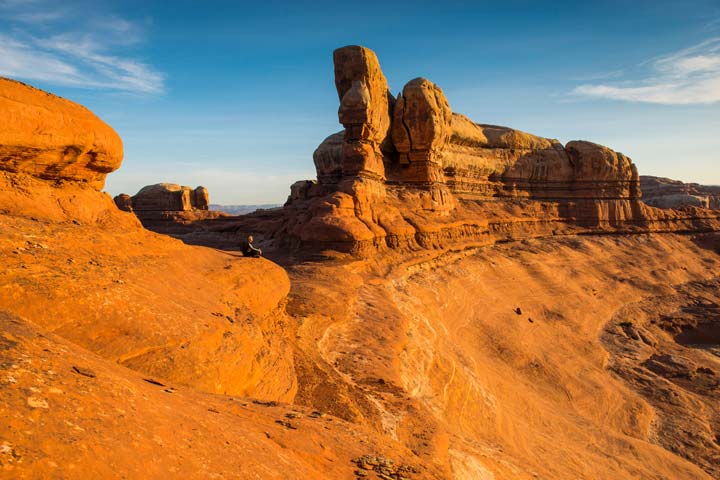 Another rock feature—a circular area of deformed rock measuring more than 5 kilometers in diameter—is clearly visible in satellite and astronaut images. Named “Upheaval Dome,” the origin of the structure is still debated.

Beyond the Canyonlands park boundaries, the urban footprint of Moab shows up in the top-right corner of the image. The greens and grays of vegetation and development contrast with the red-orange hues of the surrounding desert. The city is a hotspot for outdoor recreation, and a popular launching point for visitors heading north to Arches National Park or southwest to Canyonlands.

Southwest of Moab you can see blue spots along the banks of the Colorado River. These are evaporation ponds associated with a nearby potash mine. The pond water has been dyed dark blue to absorb more sunlight and heat, which promotes evaporation and hastens the crystallization of the dissolved potash. Read more about the process here. 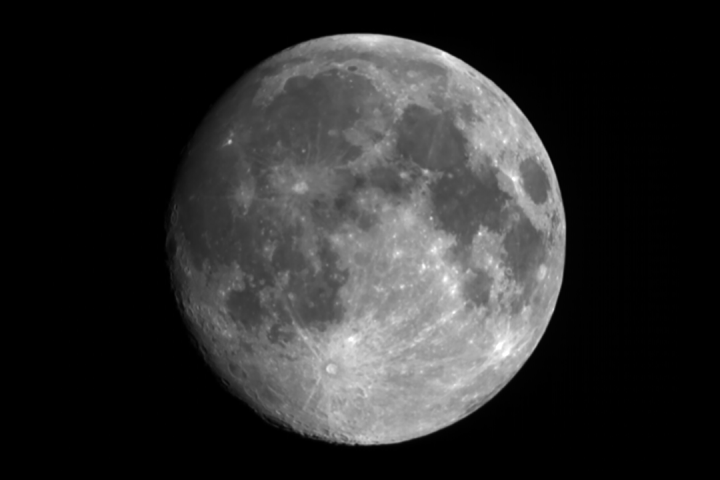