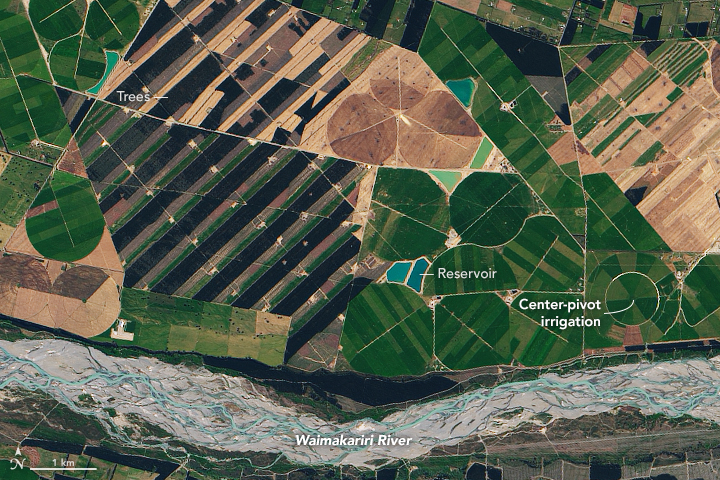 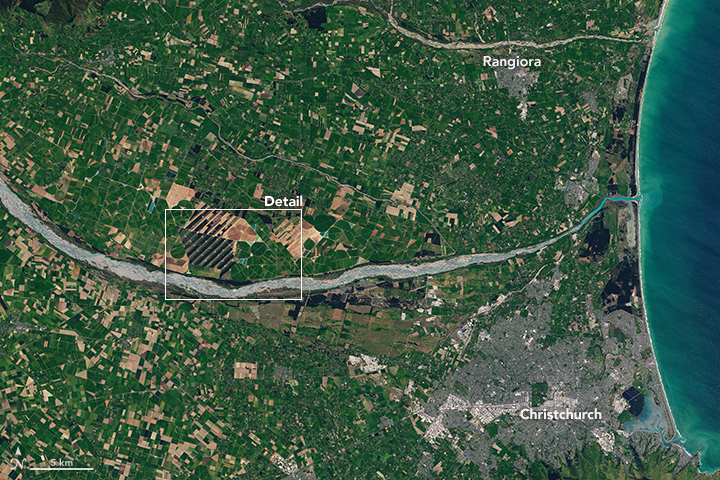 Editor’s note: today’s caption is the answer to the February puzzler.

The Operational Land Imager (OLI) on Landsat 8 captured these images of New Zealand’s Canterbury Plains and Eyrewell Forest on October 17, 2015. The shallow, braided channels of the Waimakariri River twist through the landscape and flow into Pegasus Bay and the Pacific Ocean.

The alluvial plains of the Waimakariri contain pastureland and sod farms. Near the shallow, wide riverbed, some farmers keep paddocks and fields where cattle graze; Christchurch gets much of its milk from dairy farms around the river. The poorly-drained soils also lend themselves to sod farming.

The snow-fed river, which has its source in the Southern Alps, has a highly variable flow and sporadic flooding. Even so, the nearby terrain is susceptible to dry periods. Some fields farther from the river are irrigated by center-pivot sprinklers, which form a circular pattern when the landscape is viewed from above.

The Eyrewell Forest pine plantations were established in the late 1920s. New Zealand’s dense stands of pinus radiata grow for more than 25 years before they are harvested, and the trees can stand up to 40 meters (130 feet) tall. Patches of older pines grow alongside younger ones, as well as stands of native species such as kanuka trees.

Although bucolic and green, the Canterbury Plains are not always calm. Strong winds occasionally scour the rural area and wipe out forests, which tend to grow in strips parallel to the wind flow. Winds toppled thousands of trees in the area in 1945, 1964, and 1975. The winds often blow in from the northwest, perpendicular to the Southern Alps, and increase in speed as they roll downhill. The soil beneath Eyrewell Forest is shallow and has compacted gravel beneath, preventing trees from developing deep roots.

Bucolic and green, the Canterbury Plains region is far from quiet.

Lands along the Priest River show a human hand at work.