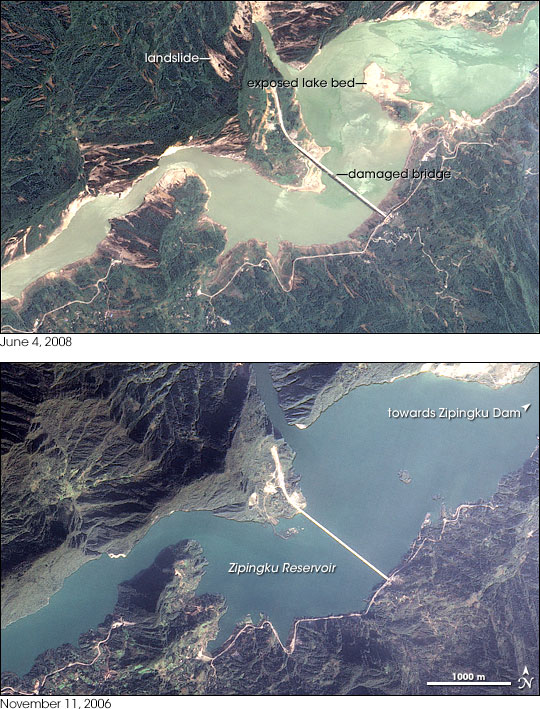 Apart from causing landslides and widespread damage to structures throughout the Sichuan Basin in central China, the 7.9-magnitude earthquake of May 12, 2008, was also notable for the flood hazards it created. Landslides blocked rivers, creating several unstable lakes throughout the mountainous region. The largest of these lakes, Tangjiashan Lake, would threaten more than 1.3 million people if it burst. The other significant flood hazard came from quake-weakened dams. Immediately following the quake, officials worried that as many as 400 dams had been damaged, reported BBC news. The Zipingku Dam, just east of the quake’s epicenter, was among the largest to shown signs of damage. Cracks lined the surface of the dam, prompting the government to send 2,000 troops to repair the structure.

This true-color image, captured by Taiwan’s Formosat satellite on June 4, 2008, reveals changes to Zipingku Reservoir behind the dam in the wake of the powerful earthquake. The reservoir is significantly smaller than it had been on November 11, 2006, lower image. The reservoir is ringed with tan shoreline exposed as the water level dropped. The difference in the shoreline is most notable on the south shore and near the bridge in the north. In November 2006, a road hugged the southern banks of the reservoir. On June 4, 2008, a wide span of land separated the road from the lake. Under the bridge, part of which looks as if it collapsed, land juts into the lake from the north. A large portion of the lake bed has also been exposed as water levels dropped. Most of the change in the water level likely occurred as officials drained water from the reservoir to alleviate pressure on the damaged dam.

Built in 2006, the Zipingku Dam is about 5 kilometers upstream from the small city of Dujiangyan. The dam was built to supply water to farms and cities in the Sichuan plain.

his true-color image, captured by Taiwan’s Formosat satellite on June 4, 2008, reveals changes to Zipingku Reservoir behind the dam in the wake of the 7.9-magnitude earthquake of May 12, 2008.