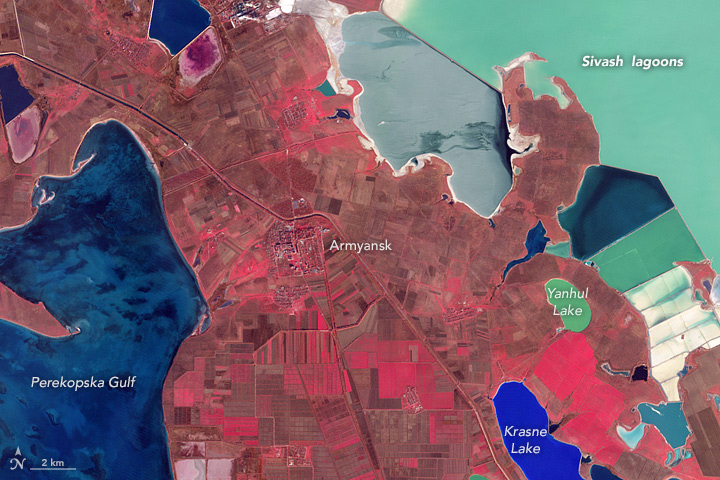 For astronauts looking down at the Black Sea or for scientists viewing imagery captured by satellites, the salty lagoons along the northern border of the Crimean Peninsula offer an unmistakable swash of color. In natural-color imagery, the shallow lakes and lagoons are striking shades of pink, orange, and yellow because of the colorful, salt-loving microorganisms that thrive in the hypersaline water. These lakes and lagoons became so salty because they were formed when seawater surged inland during storms and then was blocked from draining back into the sea.

In false-color imagery, these bodies of water have an otherworldly appearance. The Advanced Land Imager (ALI) on NASA’s Earth Observing-1 satellite captured this false-color image on December 13, 2015. It is composed from observations of red, blue, and near-infrared light. Vegetation appears red; seawater is dark blue; and the salt lakes have colors ranging from cyan to navy blue. Notice the sharp lines that divide some of the lagoons. These are caused by roads or other barriers that prevent water from circulating, which leads to differences in salinity.

False-color satellite imagery offers more than just a pretty picture. To make images like this, Earth Observatory uses observations ALI made in near-infrared light, a type of light between 700 and 1,100 nanometers on the electromagnetic spectrum that is not visible to the human eye. Water absorbs near-infrared light strongly, so these wavelengths are especially useful for distinguishing land-water boundaries that are not obvious in visible light.

Read more about false-color satellite imagery in Why is that Forest Red and that Cloud Blue?