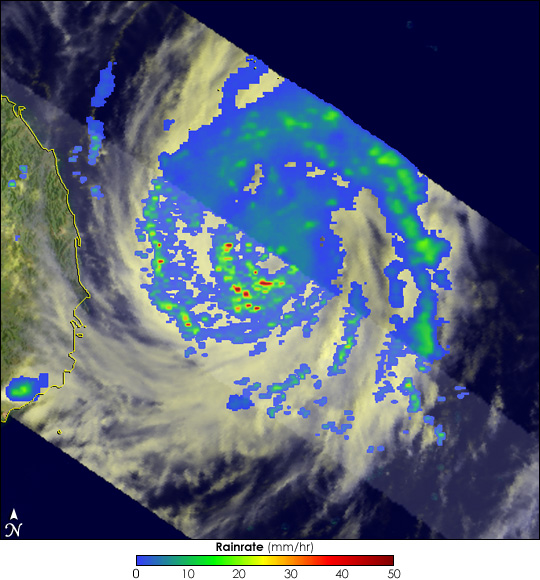 Starting out as Tropical Storm 02W, Typhoon Neoguri swelled into the western Pacific Ocean’s first typhoon of 2008 on April 15, according to Accuweather.com. The storm headed for southern China, threatening to make landfall later in the week.

The Tropical Rainfall Measuring Mission (TRMM) satellite collected the data used to make this image of the typhoon at 4:26 p.m. in China (8:26 UTC) on April 16, 2008. The nearly opaque white clouds in this image are from TRMM’s Visible Infrared Scanner. The color-coded part of the image shows rain rates observed by two TRMM sensors. The inner swath was observed by TRMM’s Precipitation Radar, which penetrates into the heart of the storm. The outer swaths were observed by TRMM’s Microwave Imager, which detects rainfall at the edges of the storm. The most intense rainfall amounts appear in red, and the lightest rainfall areas appear in blue. (As TRMM only observes the atmosphere (clouds and rainfall), the land and water surfaces shown in this image are from NASA’s Blue Marble.)

At the time this image was captured, Neoguri was a Category 1 storm with winds estimated at 140 kilometers per hour (86 miles per hour or 75 knots). By April 17, 2008, the storm had strengthened and its rainfall had intensified. The Joint Typhoon Warning Center predicted that the storm would come ashore over southern China on April 19. According to USA Today, China’s meteorological observatory warned of strong winds and rain, and encouraged coastal residents to take precautions.

The first typhoon of 2008 in the western Pacific Ocean, Typhoon Neoguri moved towards southern China during the third week of April.

This image shows rainfall patterns in Typhoon Neoguri, the first typhoon of the 2008 season in the western Pacific Ocean, on April 17, 2008. The rain was most intense north of the storm’s eye, as indicated by bands of dark red. Green and blue bands show where lighter rain encircles the eye.