Just Another Night Over Java 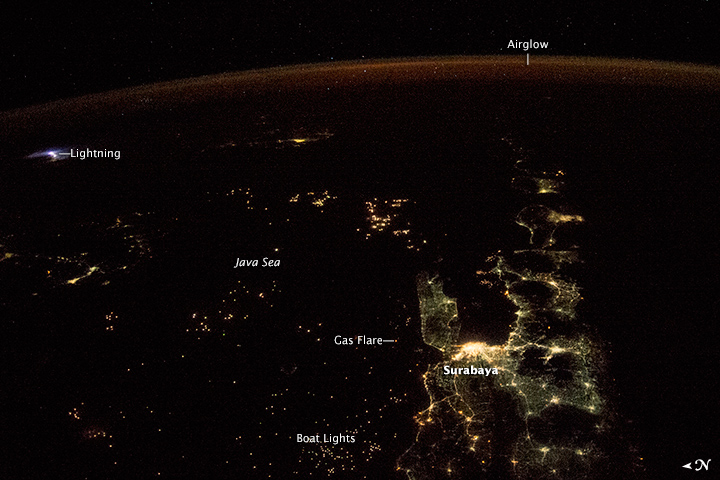 Editor’s Note: Today’s caption is the answer to Earth Observatory’s May 2015 image puzzler.

For astronauts orbiting Earth in the International Space Station, the intricate sinews and happenings of modern civilization become visible at night in ways that the bright light of daytime often obscure. In this photograph of a typical October night over the Java Sea, a member of the Expedition 42 crew captured light from roads and cities, fishing boats, and even a few gas flares. The photograph was taken on October 10, 2014.

The roads and settlements radiate from Surabaya, a large port city on the eastern end of Java. With a metro area home to more than 5.6 million people, Surabaya is the second largest city in Indonesia. Notice how the locations of towns and cities to the south of Surabaya are dictated by geography. A chain of volcanic mountains stretches along eastern Java preventing development and appearing at night like a dark necklace of beads amidst the brighter background of towns and cities surrounding them.

North of the city, large numbers of boat lights dot the darkened Java Sea. Many of these vessels are likely fishing boats using bright lights to attract squid and other sea life. According to one estimate based on satellite observations, there were over 500 fishing boats in the area on a single night in September 2014. The same study pointed out that two of the brighter points of light in the area are gas flares emanating from offshore oil infrastructure.

In addition to the human activity, the photograph also showcases a few natural splashes of light and color. The blue-white patch on the far left is a flash of lightning, a common sight for astronauts. The glowing line along the Earth’s limb is airglow, a type of light that is produced by chemical reactions happening in the atmosphere. While airglow can also be green or blue, red airglow like this generally occurs at heights of about 150 to 300 kilometers (90 miles to 190 miles) and appears because of reactions involving hydroxyl radicals.

Astronaut photograph ISS041-E-91094 was acquired on April 6, 2015, with a Nikon D4 digital camera using a 28 millimeter lens, and is provided by the ISS Crew Earth Observations Facility and the Earth Science and Remote Sensing Unit, Johnson Space Center. The image was taken by a member of the Expedition 42 crew. The image has been cropped and enhanced to improve contrast, and lens artifacts have been removed. The International Space Station Program supports the laboratory as part of the ISS National Lab to help astronauts take pictures of Earth that will be of the greatest value to scientists and the public, and to make those images freely available on the Internet. Additional images taken by astronauts and cosmonauts can be viewed at the NASA/JSC Gateway to Astronaut Photography of Earth. Caption by Adam Voiland. Congratulations to John Radford for being the first to solve the puzzler.