Smog or Fog? Actually, a Bit of Both 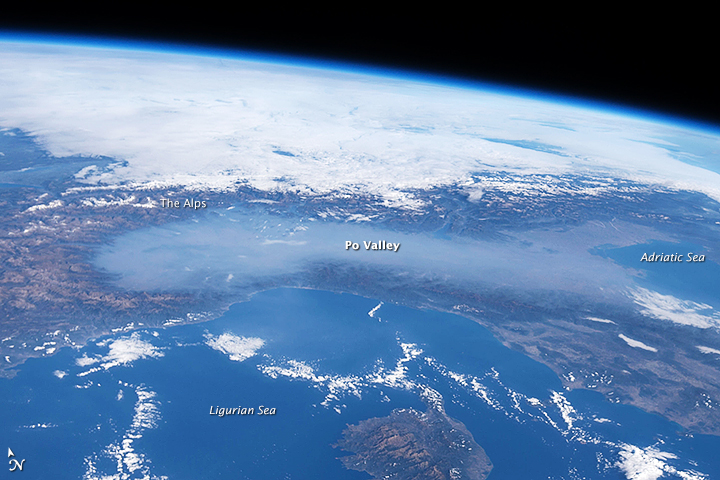 On October 30, 2014, European Space Agency astronaut Alexander Gerst tweeted a few photographs of a gray substance hovering over the Po Valley in northern Italy. “Looks almost like smog,” he noted. A few days later, Gerst tweeted another image: “Fog or smog?” he asked.

Before answering Gerst’s question, it is worth clarifying what those terms mean. Fog is type of low-lying cloud mostly comprised of suspended water droplets, and it usually appears white in natural-color satellite images. Industrial smog usually forms in cool, humid environments, and it contains large numbers of tiny aerosol particles that make it appear gray. Note that industrial smog—sometimes called sulfurous or black smog—is distinct from photochemical smog, which typically develops in warmer conditions in the summer. Haze, another term frequently used to describe polluted air, is a general term that refers to the suspended aerosol particles that reduce visibility by scattering light.

NASA Earth Observatory took Gerst’s fog or smog question to Rudolf Husar, a Washington University atmospheric scientist who has been researching air pollution for more than 40 years. ”It’s probably most accurate to say it is a combination of both,” Husar said. “The thick haze over the Po River Valley during the cold season arises from the combined effects of manmade air pollution and naturally occurring fog. In this case,Â the bluish haze is likely made up of solid or liquid residue left behind when fog droplets evaporated. So what the astronauts saw as bluish haze during the day would have looked like a patch of white fog at night and early morning.”

With the highest population density in Italy, the Po Valley produces ample amounts of gaseous pollutants from vehicles, coal-fired power plants, factories, agricultural fires, and other human activities. At the same time, fog often forms in the valley in fall and winter when temperature inversions trap cool, moist (and sometimes polluted) air near the surface.

“When fog forms, sulfur oxides, nitrogen oxides, and other polluting gases are taken up or ‘scavenged’ by fog water droplets. Once absorbed into the droplets, the gases oxidize more rapidly than they otherwise would, becoming sulfates, nitrates, and other types of aerosol particles,” explained Husar. “What the fog and humidity does is accelerate the process of converting gaseous pollutants into haze-causing aerosols.”

Astronaut photograph ISS041-E-104533 was acquired on October 30, 2014, with a Nikon D4 digital camera using an 800 millimeter lens, and is provided by the ISS Crew Earth Observations Facility and the Earth Science and Remote Sensing Unit, Johnson Space Center. The image was taken by the Expedition 41 crew. It has been cropped and enhanced to improve contrast, and lens artifacts have been removed. The International Space Station Program supports the laboratory as part of the ISS National Lab to help astronauts take pictures of Earth that will be of the greatest value to scientists and the public, and to make those images freely available on the Internet. Additional images taken by astronauts and cosmonauts can be viewed at the NASA/JSC Gateway to Astronaut Photography of Earth. Caption by Adam Voiland.

A photograph by an astronaut leads us to a teachable moment about what’s in our air. 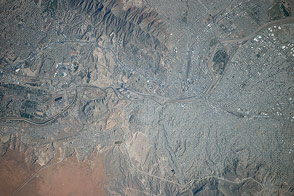