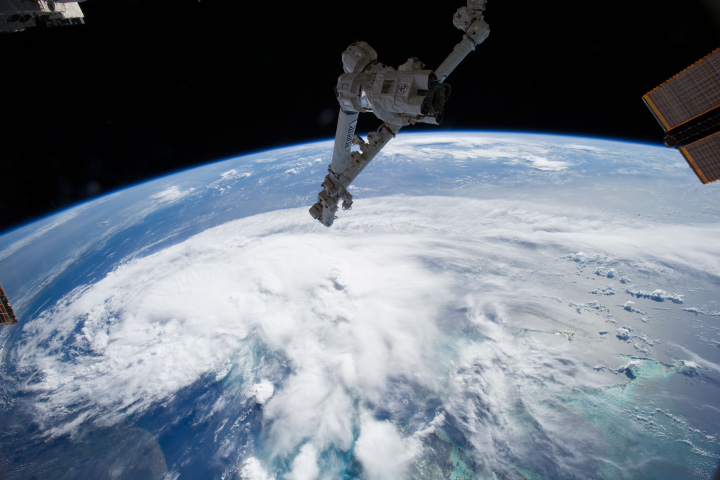 Looking out the window of the International Space Station in early July, astronauts spotted a sprawling mass of clouds. The clouds were just beginning to take shape as the first tropical storm of the 2014 season built over the Atlantic Ocean. Tropical Storm Arthur formed off southern Florida on July 1, 2014. By morning of July 2, when an astronaut took this photo with a wide-angle lens, the storm was moving north along the Florida coast. Surrounded by bright green waters, the Bahamas are south of the storm in the lower right corner of the photo. The U.S. coastline stretches along the left side of the photo. 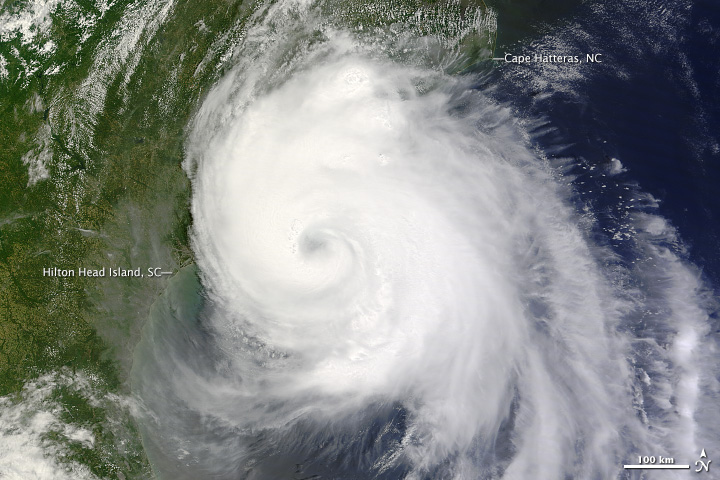 The Moderate Resolution Imaging Spectroradiometer (MODIS) on NASA’s Terra satellite acquired the above image of the storm at 12:15 p.m. on July 3, by which time the storm had become a hurricane. Arthur had winds of 150 kilometers per hour (90 miles per hour) and stronger gusts. The storm is far more organized than it was on July 2. The clouds are solid and form a tight circle measuring some 185 kilometers (115 miles) across. The northern and western bands of the storm are already over land.

Astronaut photograph ISS040-E-030560 was acquired on July 2, 2014, with a Nikon D3S digital camera using a wide-angle (19 mm) lens, and is provided by the ISS Crew Earth Observations Facility and the Earth Science and Remote Sensing Unit, Johnson Space Center. The image was taken by the Expedition 40 crew The image in this article has been enhanced to improve contrast. The International Space Station Program supports the laboratory as part of the ISS National Lab to help astronauts take pictures of Earth that will be of the greatest value to scientists and the public, and to make those images freely available on the Internet. Additional images taken by astronauts and cosmonauts can be viewed at the NASA/JSC Gateway to Astronaut Photography of Earth. NASA MODIS image courtesy Jeff Schmaltz, LANCE/EOSDIS MODIS Rapid Response Team at NASA GSFC. Caption by Holli Riebeek.

Hurricane Arthur is forecast to strengthen and graze or strike the Outer Banks of North Carolina tonight as a Category 2 hurricane.

Tropical Storm Arthur formed in the Atlantic basin on July 1, 2014. 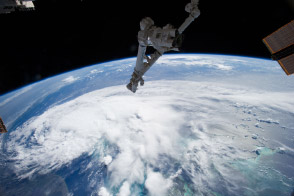