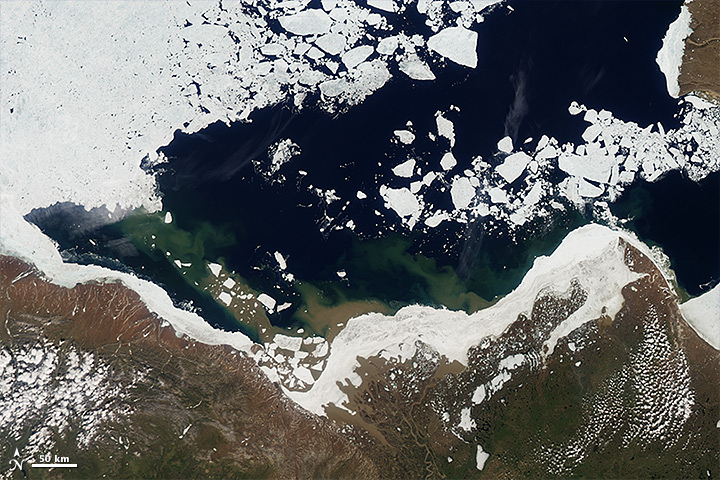 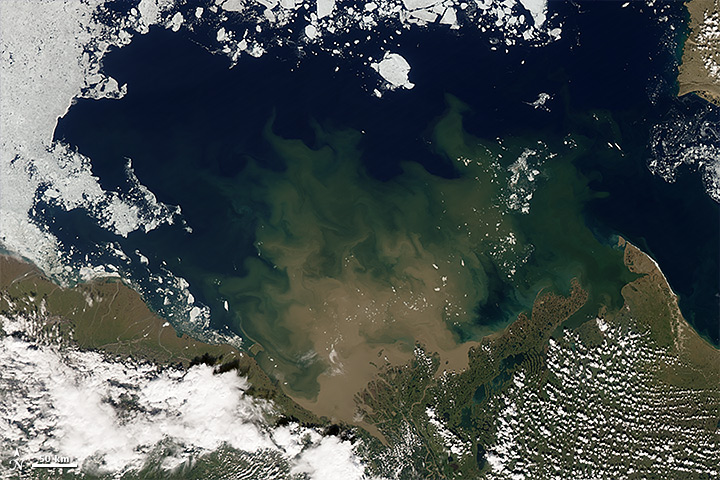 A new study led by NASA researchers demonstrates that fresh water flowing from rivers into the Arctic Ocean can have a significant effect on the extent of sea ice cover. Warm water discharges can accelerate the melting of sea ice near the coast. It also can have a wider climate impact by creating more open water, which is darker than ice and absorbs more heat from sunlight.

The scientists used satellite data to examine Canada’s Mackenzie River Delta and the nearby Beaufort Sea in 2012—the year of the lowest Arctic sea ice extent in 35 years of satellite records. They found that a massive pulse of river water in early summer raised offshore water temperatures across hundreds of kilometers and seemed to contribute to the melting and dispersal of nearby sea ice. The study was published in February 2014 in Geophysical Research Letters.

The natural-color images above show the Beaufort Sea, just north of the Mackenzie River Delta, on June 5 and July 5, 2012, as observed by the Moderate Resolution Imaging Spectroradiometer (MODIS) on NASA’s Aqua satellite. By the time of the second image, sea ice was hundreds of kilometers offshore. Brown and tan river sediments discolored the water and hinted at the extent of the outflow.

Ground- and satellite-based observations showed that Mackenzie River water accumulated behind a barrier of sea ice along the coast (visible in the top image above) and warmed up in the summer sunlight. The ice barrier then broke free and released a massive pulse of warm, fresh water across the sea surface.

“We found that rivers are effective conveyers of heat across immense watersheds in the Northern Hemisphere,” said Son Nghiem, the lead author of the study and a cryospheric scientist at NASA’s Jet Propulsion Laboratory. “These watersheds undergo continental warming in summertime, unleashing an enormous amount of energy into the Arctic Ocean, and enhancing sea ice melt.” 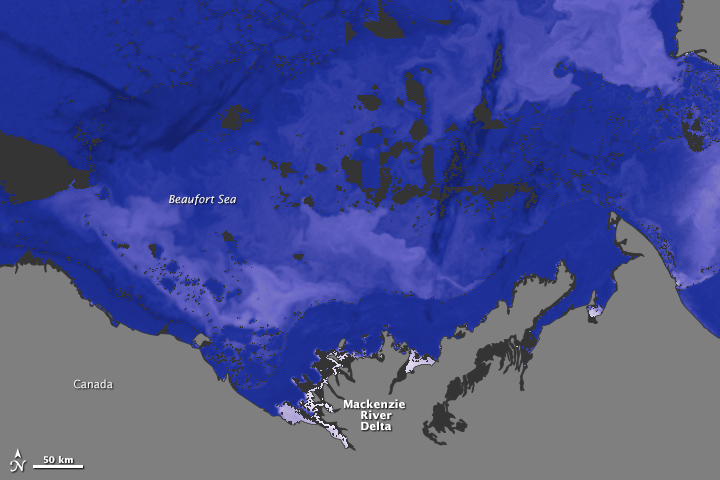 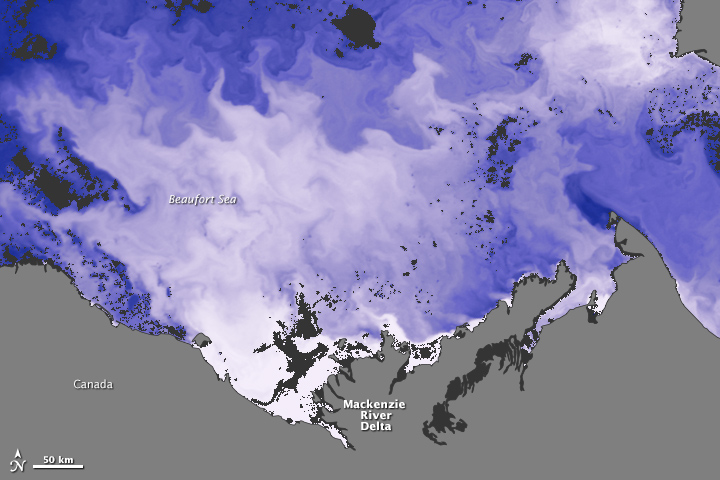 The maps above depict water temperatures in the region on the same days as the natural-color images at the top of the page. Based on microwave data from Aqua MODIS, the maps show the coolest temperatures in blue and warmer waters in progressively lighter shades of purple. According to the study by Nghiem and colleagues, the average surface temperature of the open water rose by 6.5°C (11.7°Fahrenheit) after the pulse from the Mackenzie. Temperatures were 10°C at 287 kilometers (178 miles) from the coast and 8°C as far as 350 kilometers (217 miles) away.

The intensity of the warm-water pulse was exacerbated by the ice barrier, a natural dam fastened to the shore. When the warm Mackenzie River broke through this barrier, it was “like a strong surge, unleashing warmer waters into the Arctic Ocean that were very effective at melting sea ice,” said Nghiem. “Without this ice barrier, the warm river waters would trickle out little by little, and there would be more time for the heat to dissipate to the atmosphere and to the cooler, deeper ocean.”

“If you have an ice cube and drop a few water droplets on it, you’re not going to see rapid melt,” added co-author Dorothy Hall of NASA’s Goddard Space Flight Center. “But if you pour a pitcher of warm water on the ice cube, it will appear to get smaller before your eyes. When warm river water surges onto sea ice, the ice melts rapidly.”

River discharge is becoming more important as a contributor to melting sea ice in the Arctic Ocean, Nghiem and colleagues noted. That’s because the volume and temperature of fresh water discharge is increasing as inland Arctic areas warm more each summer. In the ocean itself, the sea ice is much thinner and fragmented than in years past, so it is much more vulnerable to pulses of warm meltwater.