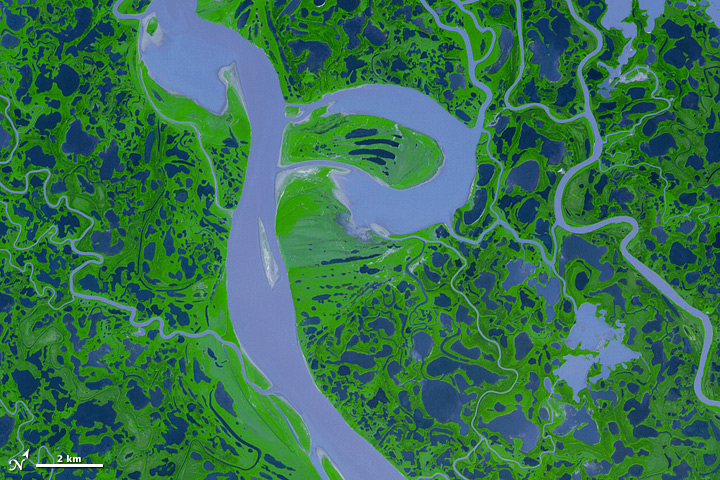 Canada’s Mackenzie River, the country’s longest, spills out of Great Slave Lake, just north of the border between Alberta and Northwest Territories. The river flows northwest, skirting the northern ranges of the Rocky Mountains before widening into a marshy, lake-dotted delta. The delta empties into the Arctic Ocean via the Beaufort Sea.

This image of the Mackenzie River Delta was captured by the Advanced Spaceborne Thermal Emission and Reflection Radiometer (ASTER) on NASA’s Terra satellite on August 4, 2005. It was the height of summer, and the far northern landscape had thawed. Hundreds of lakes puddled across the green vegetation of the tundra. The shades of blue indicate differences in water depth and clarity. The shallower or muddier the water, the lighter the blue.

The Mackenzie River itself appears to be full of sediment, cutting a wide lavender-colored ribbon across the left side of the image. Several white sandbars appear along the stretch of river shown here. A large loop in the river near the top of the image appears to be in the process of becoming an oxbow lake. As sediment continually builds up at the bends in the loop, the current is eventually restricted and finally cut off from the main channel altogether. The result is a semi-circular, oxbow lake. Numerous oxbow lakes are visible in the large version of the image. 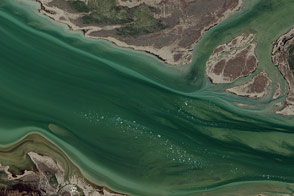