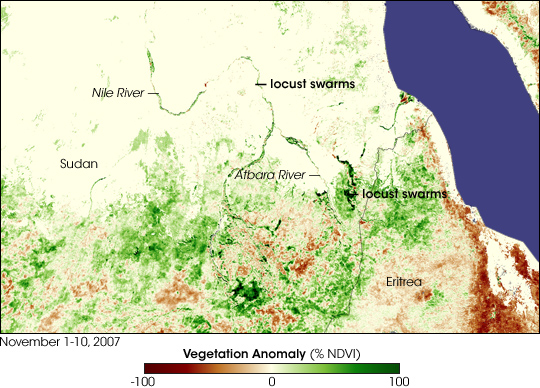 Rain is both a blessing and a curse in the deserts of northern Africa and southwest Asia. While water brings life, it also creates the conditions that bring crop-destroying locusts. On November 5, 2007, Locust Watch of the Food and Agriculture Organization of the United Nations warned of an outbreak of desert locusts in Sudan. While not yet severe enough to cause extensive damage, the bands and small swarms of locusts had the potential to develop into more dangerous swarms. This image shows the conditions that allowed large groups of locusts to develop.

The image is a vegetation anomaly image, and it shows plant growth between November 1–10, 2007, compared to average growth seen during the same period in 1998 through 2002 as recorded by the SPOT satellite. Strokes of green dominate much of Sudan in this image, indicating that plants were healthier, more numerous, or more lush than average. The green anomaly traces out the path of the Nile and Atbara Rivers. To the east of the Atbara River, a deep green streak surrounds the Gash River. Many of these areas, particularly the land along the Gash River, were submerged in floodwater for much of the summer. The rainy season of 2007 was unusually wet throughout Africa’s Sahel. In Sudan, the heavy rain triggered widespread flooding that persisted for months and left hundreds of thousands homeless. Only at the end of September did the rains ease and the land begin to dry. In the wake of the floods, plants clearly flourished.

The combination of wet, sandy soil and plenty of food also allowed a large number of locusts to hatch. Locust Watch reported sightings of locust swarms—densely packed groups of locusts—along the Nile River and near the Gash River where the vegetation anomaly shows an ample source of food. As the vegetation in these regions dies throughout the winter dry season, the locusts will be forced into more small groups. Eventually, these groups will migrate north and east to the shores of the Red Sea, their winter breeding ground. Because a large group of locusts will likely be breeding, a potentially dangerous situation could develop on the western shore of the Red Sea, said Locust Watch. When a large number of locusts are forced into a small area, as could happen when the eggs hatch, the insects become an aggressive group, capable of migrating long distances, destroying crops and other plants in their path. According to Locust Watch, a small part of an average locust swarm can eat the same amount of food as 10 elephants, 25 camels, or 2,500 people in a single day.