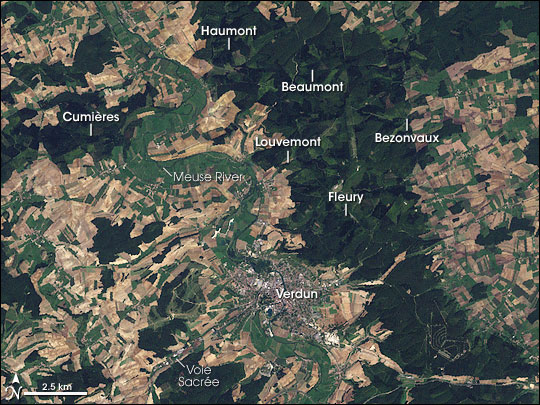 Human history isn’t confined to books; some of it is written across the surface of the Earth. Among the places where the earth itself tells a story of our past is the French landscape around the city of Verdun, where more than 300,000 French and Germans died during a World War I battle that went on from mid-February to mid-December 1916.

In this image, Verdun is a small city on the banks of the Meuse River surrounded by the geometric pattern of farmed and fallow fields. The river is framed by deep green woodlands. The front line during the Battle of Verdun passed through the now-heavily-wooded areas north of Verdun and curved clockwise (toward the southeast) through the strip of forest east of the river. (Maps and photographs show that some of the area was wooded at the time of the battle, as well).

The devastation caused by months of trench warfare—the huge network of trenches and tunnels, the craters left by shelling, the unexploded munitions, the residues of poison gas, and the human remains—was so complete that six villages north of the city were not rebuilt: Cumières-le-Mort-Homme, Haumont-près-Samogneux, Louvemont-Côte-du-Poivre, Beaumont-en-Verdunois, Bezonvaux, and Fleury-devant-Douaumont. The woods have grown up around these abandoned villages, which France decided not to incorporate into remaining communities. Instead, these ghost towns join the monuments and cemeteries spread across the area as a memorial to those who died.

Another part of the story of the Battle of Verdun that remains written on the land today is the large highway that comes into Verdun from the southwest. With the battle lines nearly encircling the city, this road was Verdun’s primary supply route. The road was so important that it earned the name Voie Sacrée—the “Sacred Way.” The road was little more than an unpaved country road when the battle began, and it had to be widened and frequently resurfaced with crushed stone during the battle. Today, the road goes by the more prosaic title of “N3,” but mile markers along the route commemorate its importance during the Battle of Verdun.

Veteran’s Day (observed on November 12 in 2007) was originally established as Armistice Day, an annual remembrance of the cease fire between German and Allied troops that went into effect on November 11, 1918, ending the combat of World War I. After World War II, the name was changed to Veteran’s Day, to honor American veterans of all wars. This image was captured by NASA’s Landsat 7 satellite on September 11, 2000.