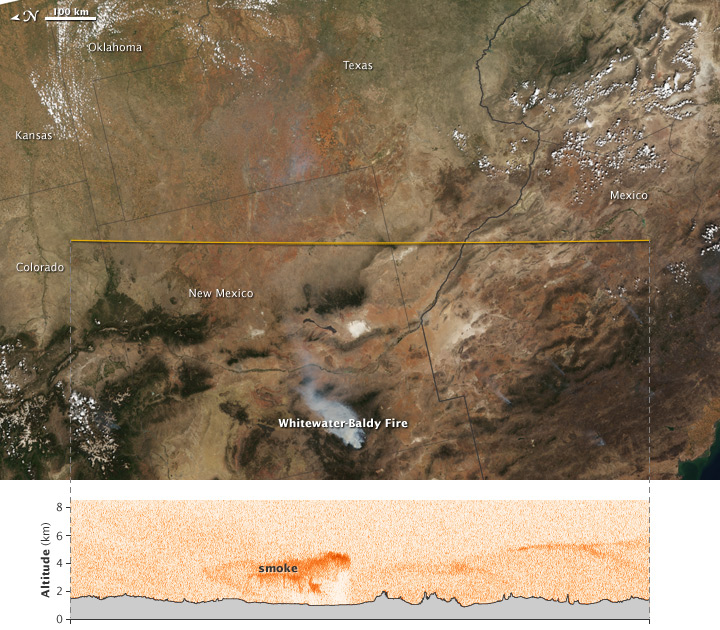 Meteorologists monitor smoke plumes from wildfires closely, especially large wildfires like Whitewater-Baldy, because the smoke can pose significant health hazards, particularly to young children and the elderly. According to one study published in 2012, more than 300,000 deaths are attributable to wildfire smoke each year throughout the world.

Understanding how high wildfires send smoke into the atmosphere is one of the key pieces of information required to predict where and how a smoke plume will spread. Fires that inject smoke above the boundary layer (the part of the atmosphere closest to the surface where the topography of the ground has a significant impact on winds) and into the troposphere spread smoke farther than smoke that remains trapped in the boundary layer.

This blend of images from the Cloud-Aerosol Lidar with Orthogonal Polarization (CALIOP) instrument on the CALIPSO satellite and the Moderate Resolution Imaging Spectroradiometer (MODIS) on NASA’s Aqua satellite on May 29, 2012, offers two different views of smoke from the Whitewater-Baldy fire.

The background (top) image was captured by MODIS at 2:05 p.m. local time (20:05 UTC) and provides a true-color view of the fire from directly above. The yellow line indicates the path of the CALIPSO satellite and its laser. CALIPSO sent pulses of laser light (lidar) down through the atmosphere and records the reflections to generate a vertical profile of the smoke plume. The MODIS image has been rotated so that it and the line that depicts the CALIPSO flight track are aligned horizontally.

In the lower image, based on CALIPSO data acquired at 2:57 a.m. local time (08:57 UTC), a patch of smoke is visible between about 2 and 5 kilometers (1.2 and 3.1 km). Though that is high enough to put smoke above the boundary layer, it is not particularly high for smoke from such a large fire. In fact, ground instruments showed that the Whitewater-Baldy fire sent smoke nearly 11 kilometers (7 miles) high on May 22, 2012, according to New Mexico State Climatologist Dave DuBois.

The vertical extent of the boundary layer varies, but it generally extends upward from the surface to a maximum of about 5 kilometers (3.1 miles) in the western United States. Occasionally, wildfires generate enough convection to send smoke plumes even higher than the boundary layer and the rest of the troposphere and into the stratosphere, a layer of the atmosphere that generally begins between 8 and 16 kilometers (5 and 9 miles) from the surface. A preliminary analysis by DuBois suggests that smoke from the Whitewater-Baldy fire did reach the stratosphere.

One of the most important models scientists use to predict the movement of wildfire smoke plumes is called the Community Multi-scale Air Quality (CMAQ) model. Although it is quite useful and has improved tremendously over the years, one of the remaining shortcomings with CMAQ is the simplicity of the technique used to estimate the height of wildfire smoke plumes, according to NASA Langley scientist Amber Soja.

Soja and colleagues at Langley are using data from a number of satellites and instruments, including CALIPSO and MODIS, to improve CMAQ’s estimates of wildfire plume heights. She expects that more sophisticated plume heights will be incorporated into the model by the fall of 2013.