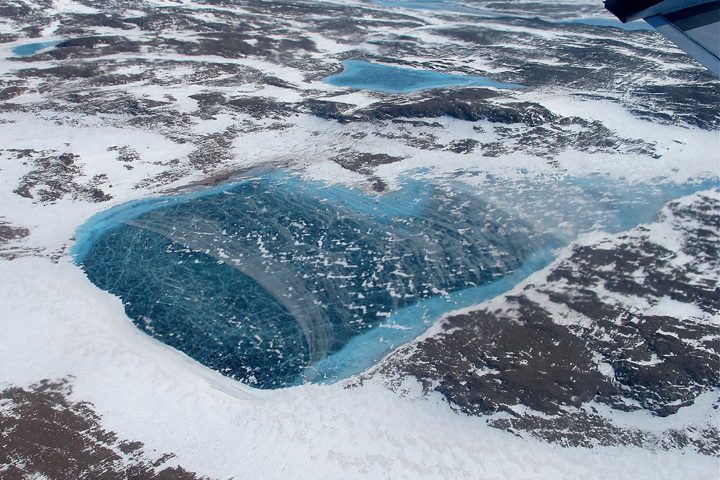 The surface of Greenland is covered with fresh water—about 2.6 million cubic kilometers of it. Yet that water is frozen, locked up in ice and snow. At least most of it is.

The photograph above shows a meltwater pond nestled amid the rock-and-ice covered fringe of Greenland. The photograph was taken around midday on May 7, 2012, as NASA’s P-3B airplane was flying over the island’s northeastern coast at 76.84 degrees north latitude and 22.07 degrees west longitude.

Unlike the classic melt ponds that form on the surface of the ice sheet, the pond in this image sits amidst the exposed brown-black hills near the coast. The water surface appears covered with a thin, mostly transparent layer of ice, and the water within is likely runoff from nearby melting snow and glacial ice. Scientists closely watch liquid water on Greenland because it is believed to lubricate the bases of glaciers, allowing them to move faster. Melting ice also dumps fresh water into the ocean and raises sea level. There is enough water trapped in Greenland’s ice sheet to raise global sea level by 6 meters (20 feet).

Researchers spied this pond during a flight designed to examine the bedrock topography of northeast Greenland, as well as the movement of ice into the ocean. During NASA’s multi-year IceBridge airborne campaign, scientists are flying novel instruments to measure the surface of the ice sheet, the solid ground below it, and how the two are interacting. Data from the airborne campaigns are intended to mirror similar observations made by the ICESat satellite mission (2003–2010) and the upcoming ICESat-II (planned for launch in 2016).

The instruments on the P-3B aircraft during the 2012 Arctic campaign included: a geo-referenced digital camera pointing straight down; two laser instruments to measure the surface elevation under the plane; four radars for measuring snow and ice depth and for seeing through the ice cover to the bedrock; a gravimeter to measure the gravity field; a magnetometer to measure the magnetic field; and an infrared detector for measuring the temperature of the ice and snow surfaces. The spring campaign ended on May 24 after 11 weeks and 44 research flights.

Operation IceBridge will resume in October 2012 with flights to Antarctica. Researchers will return to Greenland, Alaska, and the Arctic Ocean in March 2013.